How to Play Mississippi Stud Poker

3 minutes to read
Spread the word

Mississippi Stud is a five-card poker stud table game dealt like upside down Let-it-Ride, it can be played in in land-based casinos such as Las Vegas and at most USA friendly online casinos.

Its not played against other players or the dealer; the aim of Mississippi Stud Poker is to make a pair of 6’s or better to get paid according to the Payout Table (Help Screen).

The game itself is easy to learn and to play. On the player’s final five card hand are wins determined. The trick is when to fold or when to raise.

How Mississippi Stud is Played 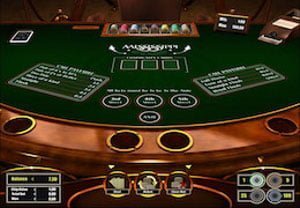 A single wager is made on the Ante circle, anything from three additional bets must be made that ranges from 1 to 3 times. Once the player has made an Ante wager the dealer will deal two cards face down to each betting circle and then the community cards face down on the layout. You’re allowed to look at your two cards and fold, if you’ve lost your Ante wager you can raise it 1 to 3 times.

Mississippi Stud allows you to make a lot of decisions, keep in mind that your first decision is the most important one such as when to fold and which two cards to play. In order to win you need a pair of 6’s or better, get rid of your low value cards and play only with your higher value ones.

One at a time the 3 community cards are exposed, with a betting round after the first and second. Big cards allow you to stay in the game, fold if you can’t make a straight or a flush. With any three suited cards or a small pair of 2’s through 5’s raise the Ante wager by 1x. Also raise 1x in case you have two face cards, any three cards 6 to 10, or any three  ards that will land you a flush or a straight.

If you have a straight flush raise your Ante war by 3x, should you have a pair of 6’s or higher it’s a guaranteed payoff hand. Raise 1x your Ante with a small pair of 2’s through 5’s, any two face cards and any hand where you bet 3x your wager after your first community card is exposed. Raise your bet by 1x with a gut-shot straight draw. It’s important to get the big bucks out and raise your Ante wager by 3x if you hold any pair of 6’s or higher or any 4 suited cards, or 4 consecutive cards where you can make a straight, like 6, 7 8 or 9.

All Bets Made Are Paid According to the Payout Table

What Are The Top 5 Table Game Truths?

Folk in their early to late 40s will remember the 80’s pop group Tears for Fears’ pop act, ”Everybody wants to rule the world.” The same applies to onlin...

How To Play Chase The Flush Poker

There’s a new poker table in town called ‘Chase the Flush”, players will notice that it resembles both High Card Flush and Ultimate Texas Hold’Em, itR...

Play N’ Go has been releasing some spectacular slot games lately this is why I decided to take its newest release Prissy Princess video slot for a few real money spins. Th...

It’s never easy narrowing down the best slots of 2020 because there’s so many of them that are really good. The depth and variation of the titles were like a box of ...