IGT released MegaJackpots Wolf Run on the 26 September 2016, despite being a relatively new progressive it’s already popular with players. If you’re out for some big jackpot wins to the tune of £/€/$500,000 it is a great game that’s playable across various devices including desktop and mobile phones (Androids, iPads, tablets and iPhones).

My take on the game so far is that the graphics are a bit ‘iffy’ but then again this is a progressive so players won’t be too concerned about the visual side of things. The slots has an American Indian theme this is why you’ll see icons like Indian totem poles, various wolfs, wilds and the Mega Jackpot symbol on the reels.

MegaJackpots Wolf Run features 40 paylines, 5 reels and offers an average payout percentage return to the player (RTP) that’s between 97.1  and 95%. Since it is a progressive, wins during the main game are quite far and few in between but shoots up when the bonus modes are triggered. In short, you need a hefty bankroll to play this one. 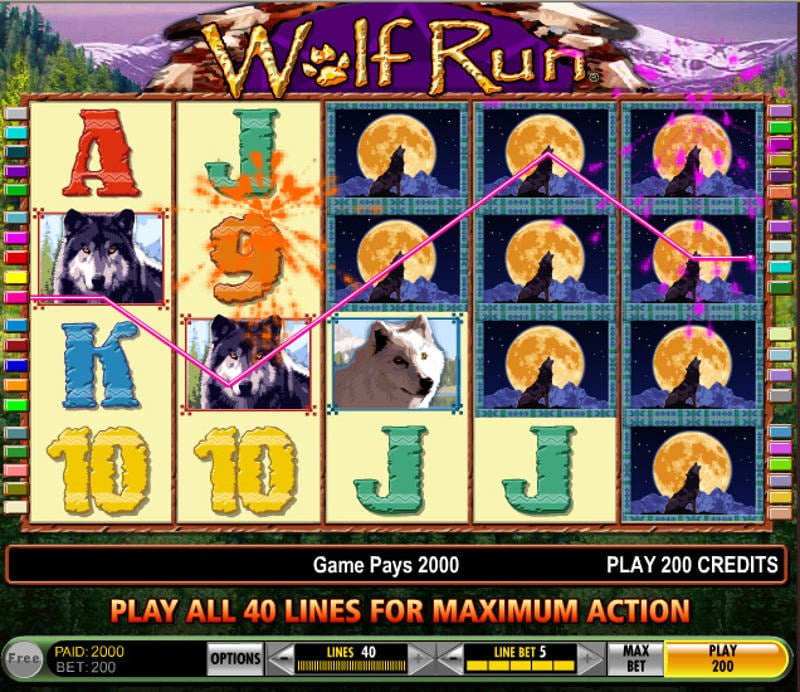 Right off the bat IGT’s MegaJackpot Wolf Run is a medium variance slots that’s suitable to players with different budgets. Bets can be placed from £$0.40 up to £$80 per spin.

Pay close attention to the MegaJackpot symbol because it appears stacked across the reels, all 5 of them to be exact. And, this is where the game becomes quite interesting. The MegaJackpot acts as a wild by boosting all wins when it substitutes all the other symbols except the free spins logo. Okay, so what happens when they pitch on the reels? All I can say is a hearty congratz you’ve just won the top jackpot prize!

Having done a bit of research since the game’s release an interesting snippet came up. When the jackpot cash prize is 500,000 the RTP of the game is 91%. But, if it hits the million dollar mark plus it shoots up to 93%. The gist of the story here is your odds at winning the jackpot when it’s a million bucks is slightly better.

The wolf howling at the moon is the wild icon, it forms a winning combination when it replaces the other symbols on the reels.

‘The bigger your line bet the better your chances of hitting the jackpot.’ IGT

To be honest I thought IGT might have experienced a ‘Duh’ moment when they made that statement and here’s why. From what I can glean from the above extract is that the game becomes looser at higher bet levels. If you’re a high roller and you fancy your chances I’d say this is the way to go. It makes perfect sense when you look at it from IGT’s angle.

How do I trigger the free spins feature? When 3 ‘Bonus’ symbols pitch on reels 2, 3, and 4 it’s triggered rewarding you with 5 free spins. The free spins mode can be re-triggered that’s if another 3 Bonus symbols appear on the reels within your allotted 5 spins.

During the main game it’s the MegaJackpot symbol that’s responsible for all the action and during the free spins it acts as wild taking wins to the next level. Remember this is a progressive jackpot slots which will gobble up your budget faster than you can say’ where did my cash go’? The game can be played with a small budget but it’s expressly designed for players with sturdy bankrolls.