Willie’s Hot Chillies from Net Entertainment is a medium variance video slot with 3 rows, 5 reels, and 20 paylines. You don’t have to be a real money slots expert to see that it has a Mexican theme. Does it have enough in it to inflame you? Or, will it fizzle out after a session? NetEnt spices up play with Stacked Multiplier Wilds of up to 5x. Subsequently, Willy’s Hot Wheel enables you to score coin wins and to snag progressive Chillie Multipliers. Let’s be honest, Willie’s Hot Chillies sounds more like your friendly neighbour than an online slot machine. Granted, if it’s anything like Spinata Grande, you can expect fireworks from the get-go. Especially, when those Stacked Multiplier Wilds kick in.

The slots for real cash pays up to 3,000x (£1.2 million) your stake on a single spin. At the maximum bet, the jackpot is £1.2 million which is huge. Therefore, it’s more than enough to entice the high roller casino VIPs to play it. Now, the coin betting range is intriguing too. Simply, because bets per spin start with a modest £0.20 up to £400. It’s quite large. Furthermore, we can see that NetEnt tries to make it as appealing as possible for players with different bankrolls. Essentially, you can determine your own volatility which is great. The higher your average bet, the bigger the payout you’ll receive. You can play Willie’s Hot Chillies at our best mobile casinos. 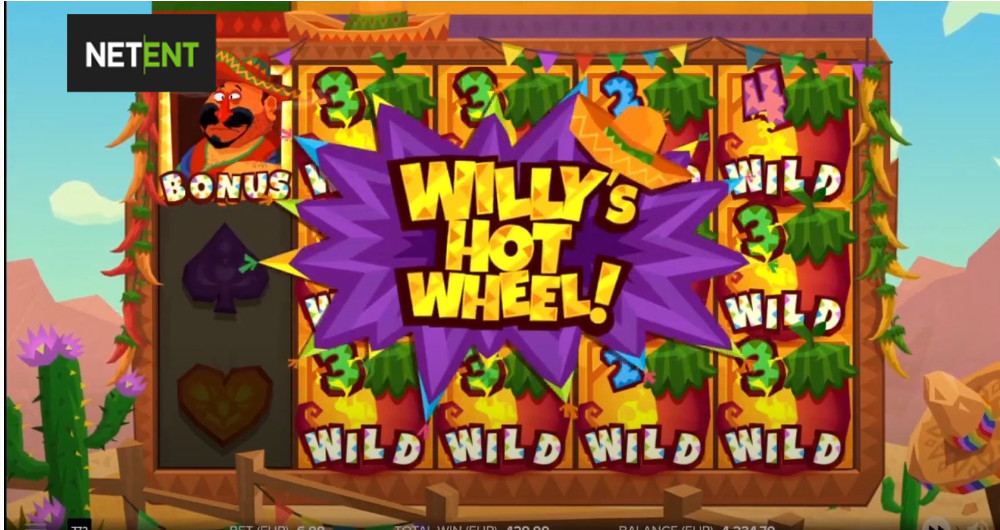 Willie’s Hot Chillie’s has an RTP or average return to player percentage of 96%. Well, it’s not bad, but we’ve seen ultra-high variance games with more impressive RTPs. Primal Megaways is a prime example since it sports an RTP of 96.76%. Many slots experts including us laud it as one of the most entertaining real money slots of all time. Apologies, for the interruption, but we had to throw that in. Then there’s the Hit Frequency which we believe to be in the vicinity of 18%. Normally, the hit ratio makes up for it if the game has a sub-par RTP. As is the case with Willie’s Hot Chillies.

The graphics in the game has that cartoon-like look with our friend Willy which oversees matters. The audio track is a Mariachi band that compliments the theme. A cactus and sombrero flank the reels. The symbols on the reels are diamonds, clubs, spades, and hearts. They are the low-value symbols. The high-value symbols are treasure chests, piñatas, tacos, and bottles of chillie. The premium symbol is the treasure chest. When 5 of them pitch you’ll receive a cash prize of 3x your stake. The Wild is the chillie symbol. When it appears in a winning combination, it replaces adjacent symbols except for the bonus symbol. The Wild sports a multiplier value of 2x, 3x, 4x, or 5x. 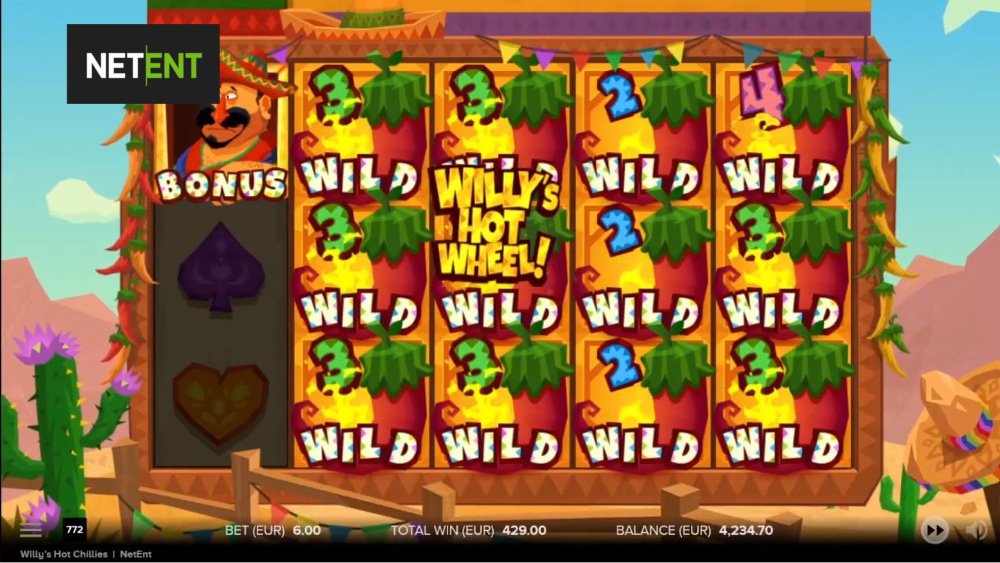 The Wild symbol is the chillie. It substitutes symbols adjacent to it during a winning combination. It only pitches on reels 2, 3, 4, and 5 as stacks of multiplier wilds. In the base game, try and score a fully wild reel. The more multipliers you can score the better because the value ranges from 2x up to 5x. The consolation for us so far is that the value of the multipliers combines. For example, if you hit a 3x multiplier wild and a multiplier wild of 2x, their combined value is 5x.

The Fire Pointer offers the following:

Your goal is to land as many Fire Pointers as possible. Not only because it offers you plenty of extra spins, but it increases the Chillie Multiplier as well. Interestingly, the Chillie Multiplier value also combines with the payouts you received during the feature. This is where you want to be because you can win the jackpot of 3,000x your stake right here!

Willie’s Hot Chillies is visually impressive and fully optimized for mobile phones. Knowing NetEnt the slots for real money has its moments. Yet, it can leave you with watery eyes and a dry bankroll within a session. We know the RTP is 96% but what concerns us is the RTP in the base game. If we can make a guess it’s around 87%. Therefore, you can expect a winning spin on every 4 to 5 spins in the base game. The payouts can be anything from 2x to 25x your stake.

Now, it would be interesting to see how many times the stacks of multiplier wilds pitch. Also, we think it’s safe to say that 20% of the game consists of features. In layman’s terms, it increases your playtime which is a good thing. Without further ado, it’s not a bad slots per se. The volatility becomes ‘brutal’ at the highest bet levels because it houses a top jackpot of £1.2 million. That’s if you fire away at £400 per spin. So, our advice to you, cash out after a big win because the game will clam up after that. If you had fun, we recommend Blazing Bull from the same developer.