Net Entertainment released Warlords: Crystals of Power on the 24th of November 2016. Many regard this slot as one of NetEnt’s most epic slots releases this year but I have my reservations. Not wanting to jump on the ‘Hoo Ha’ bandwagon just yet it’s best to wait what other players have to say about the slots first and if it really lives up to all the hype.

One thing that I can say with absolute certainty is that you can win a massive jackpot of 100,000 times your stake and if you wager the maximum amount of cash you can win a million in cold cash! Overall, I’m impressed with the quality of the graphics, camera close ups, shadings, game mechanics and the introductory clip.

So what’s the game all about? It’s a fantasy-themed slots that takes you back to a time where three rulers fought for the control of the world. They are the Barbarian, The Priestess and The Samurai. Their sole aim is to defeat each other and capture all the spoils in a world where chaos reigns supreme, the question is, are you up for the task? The game features 30 paylines, 5 reels, spectacular wilds and three highly innovative free spins bonus features. The RTP or return to player percentage is 96.89% bordering on 97% which is really not bad. Bets can be made from 15 pence but I must warn you it’s quite a complex slots.

Symbols that appear on the reels are the Samurai, the Princess, the Barbarian, 3 different coloured scatters, wolf, black panther, warthog, warriors masks, hammer, samurai sword and overlaying wilds. Having played the game on my Android mobile phone I must say it really plays well and it didn’t ‘freeze’ for one second. Just make sure that your Wi-Fi connection is tuned on otherwise she can be a bit greedy on the data bundles. 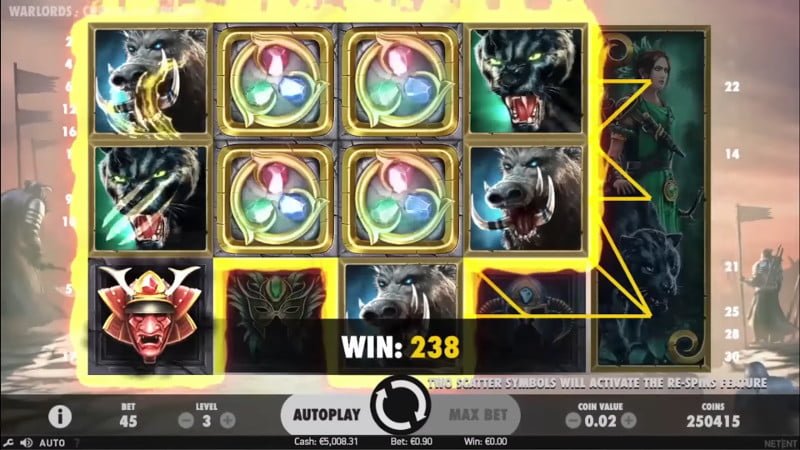 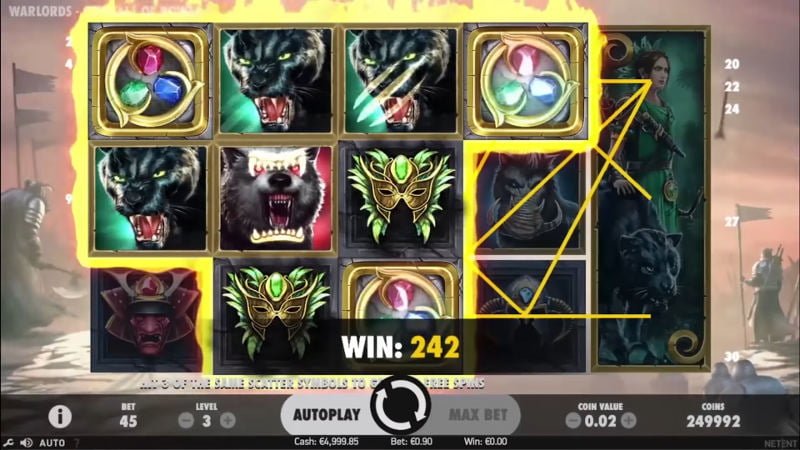 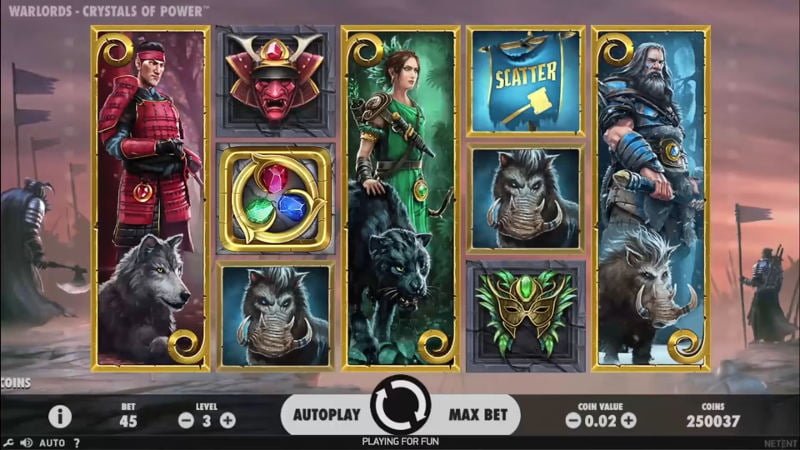 As usual there’s an Auto Play feature that spins the reels for you if you’re busy with other stuff. You can join the crystal lords by placing your bets from £0.15 up to £150 per spin.

The rulers appear stacked on the reels while each of them have 3 different coloured masks. Each ruler is represented by an animal starting with the panther, the wolf and the warthog. The symbol that offers the biggest cash prize during the base game is the Samurai in conjunction with a wild that pays 20x your stake when 5 of them pitch. The game certainly doesn’t lack any bonus features since there are a bunch of them so hold onto your hat.

There are 3 different coloured scatters each one is represented by the hammer, sword and arrow. The Barbarian free spins is the blue scatter, the Priestess is the green one and the red scatter triggers the Samurai Free Spins.

NetEnt also threw in an interesting snippet, the ‘Battle’ Feature, it’s triggered when different scatters pop up on the reels. The 3 overloads wage war on each to see which free spins feature is going to be triggered. Re-spins are awarded is the active scatters remain locked on the reels, every time a new scatter pitches re-spins are awarded.

When 3 scatters of the same appear,the corresponding free spins feature is triggered. Now if you fail to trigger any of the free scatters the ‘Fina; Chance’ feature will be triggered where you can win as much as 100 times your wager. It looks like this:

Here you can win 5 free spins but the scatter acts as a sticky wild which really boost wins. Just like the Barbarian free spins feature the total cash prize that can be won here is 600x your stake.

During this bonus mode you’ll win a total of 7 free spins but the scatters increase multiplier wins by 1x every time they appear. It goes without saying that of the 3 free spins features this one is by far the most lucrative-you can win a smashing 6,666x your stake!

NetEnt’s Warlords: Crystals of Power might seem a tad complex especially to first time slot players but alas it’s a great game that takes you an an epic journey. The more you spin the reels the more the plot and story line unfolds.

The visual side of the slots is best described as vivid and colourful. Looks like 3 different free spins features is the norm with NetEnt’s latest releases, not that we’re complaining. Keep an eye on your pocket because it’s a medium to high variance slots. Maybe, just maybe this could be the vendor’s best online slots release for 2016 but let’s not get ahead of ourselves here.