Players who can remember the television series Wacky Races will be delighted to hear that Bally Technologies released an online slots based on it.

With 40 paylines, 5 reels, a fixed non-progressive jackpot of 250 coins, Wacky Races contains a free spins feature that rewards up to 200 free spins not to mention its 10 bonus modes! The main characters that feature in the slots are Muttley, Dastardly and a few others. Each bonus mode is packed with stacked reels, random wilds plus there’s a wild reel feature during the main game.

Wacky Races is playable from 50 pence up to £75 per spin on mobile devices and PC desktops at our top online casinos in the UK. The visual side of the game is flushed with cartoon like graphics which resembles a racing car while Dick Dastardly can be seen just above the reels.

The RTP or average return to player percentage of Wacky Races slots is 96.3%. 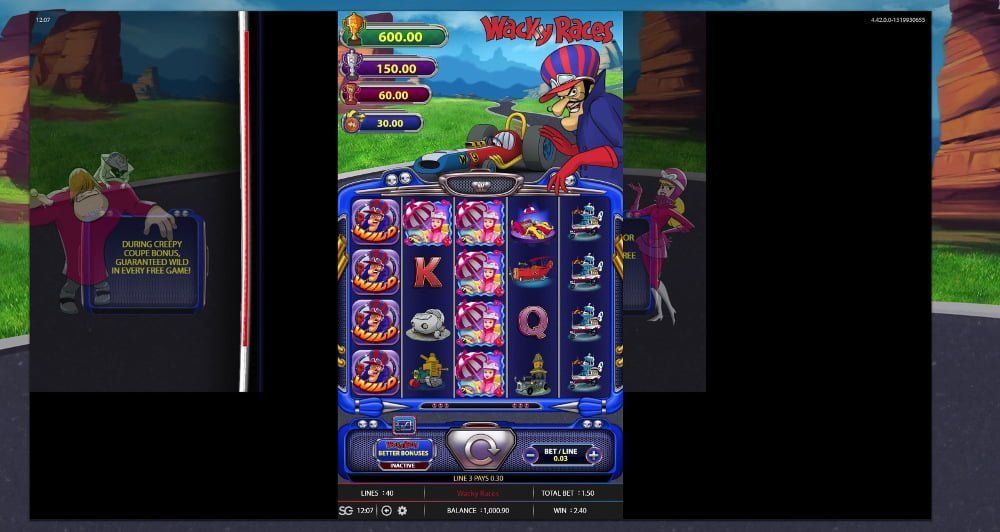 Before play gets underway you’re presented with a choice between ‘Active’ or ‘Inactive’. If you activate the feature the bonus modes will be more enhanced. With that being said your average bet per spin increases from 50 pence to 75 pence. Right, let’s discuss the bonus features.

Each reel is fitted with a mystery symbol which replaces two or three symbols randomly. Low value symbols in conjunction with a wild appears – they appear during the free spins feature but a wild symbols is not selected.

This feature is played during the base game and triggered randomly. If the game is played with the Better Bonuses feature inactive, 3 and 10 symbols can become wilds. When the Better Bonuses is turned on, three and 11 symbols can be transformed into wilds. Should the Wacky Races symbol turn wild it features as a wild and responsible for triggering the Racing Bonus mode.

During the base game the feature is initiated on a single spin. The symbols on one or more reels can be transformed into wilds. When the Wacky Races symbol is transformed into a wild serves as a wild and the catalyst that triggers the Racing Bonus feature.

When 3 Wacky Races wild symbols pitch simultaneously on reels 1,3 and 5 the Racing Bonus mode is played. Before the start of the race, five cars will appear on your screen – one car gives you a special prize. These are the bonus features:

This bonus game offers you 10 picking positions divided into 5 levels. Each pick offers you a cash prize that can be a multiplier or a bomb. Level one offers cash prizes while levels 2 to 4 offers a bomb or cash bonuses and level 5 awards a bomb or multipliers.

The trick is not to pick a bomb if you do the feature ends abruptly. The cash prize that can be won here on a single spin is 1,000x your stake with a 5x multiplier. Each unused extra live pays as much as 750x the wager you’ve made making it a very lucrative bonus feature.

During the feature you must spin the bonus wheel in order to win a Mini, Minor, Major or Mega jackpot. If the Better Bonuses is active you can win as much as 400x your wager if it’s not a cash prize of 120x your stake will be awarded.

This is a ‘Pick Me’ bonus mode, if the Better Bonuses is active you’ll receive an extra 2 to 3 picks. The top cash prize that can be won here is around 500x your line bet.

Wacky Races has a load of bonus features (10 in total), of the bonus modes we liked the ‘Professor Pat Pending Bonus Wheel and the Muttley Wacky Scrap Yard.

Concerning the free spins we find that the Penelope Pitstop free spins feature offers substantial payouts thanks to those 4 locked reels. The Creepy Coupe free spins is not too shabby either because it allows you to pocket as much as 200 free spins with wild reels.

Bally Technologies’ gift for rolling out quality slot machines cannot be denied. With a slew of innovative bonus features it plays perfectly into the mainstream slots culture. Sprinkled with some gratuitous bonus games, it is the perfect game for all the racing enthusiasts out there.