Net Entertainment brings you Victorious a non-progressive video slots. It captures the very essence of ancient Roman warfare in all its glory across the reels. The game boasts 5 reels and 243 paylines. The total jackpot payout is $7,500. It also features wilds (Eagle), scatters and free spins.

Symbols that play off across the reels are Caesar, centurion, legionnaires, the golden eagle, laurel wreaths and card symbols from 10 to Ace. When the Romans waged war each legion was commanded by a centurion. During the heyday of the Roman empire, a legion comprised of six thousand soldiers-6 columns and each column was 6 deep. Each legion also had its own Eagle standard. If the enemy captured a Roman standard it was considered a grave humiliation to the empire. This is why the legionnaires defended it to the death.

I enjoyed playing Victorious video slots. During the early stages of the game I managed to unlock the free spins feature twice. When it comes to the game’s graphics, it looks like NetEnt’s developers produced the game over the weekend. If compared to other NetEnt games there’s really not much to go by. 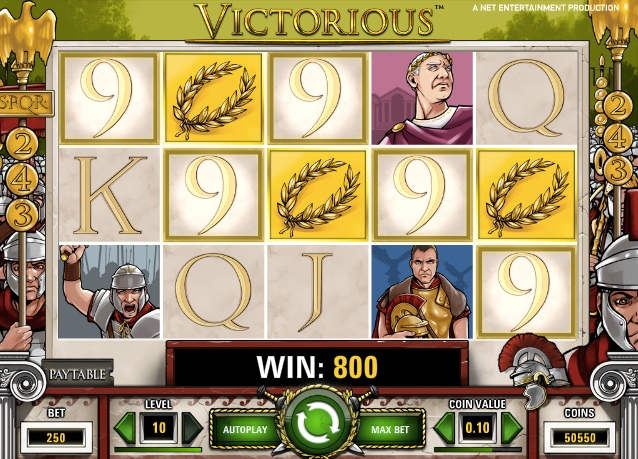 The bet amount starts with 25 cents per spin up to $250. The coin denomination ranges from 0.01 up to 50 cents. If you land 5 Julius Caesar symbols you’ll pocket 1,500 coins. Like the majority of the NetEnt games it’s all about the bonus round (free spins). Although you can land some splendid wins during the base game. Victorious is relatively loose and its current payout percentage is 97%. Only 3% goes to the house. Before you start to play do the following:

The free spins bonus round is triggered by three of more golden wreath symbols. During the bonus game you’ll receive 15 free spins. Starting from the leftmost reel, the free spin symbol must appear in succession. Wins during the free spins are tripled by a multiplier of three times. I managed to unlock the free spins round twice. My average bet per spin was $2.50 was fortunate enough to win $850.

The Golden Eagle is the wild symbol. It substitutes all the other symbols as well as the golden wreath scatter symbol.

This is where the game becomes slightly tricky. To trigger the free spins you need 3, 4, or 5 scatter symbols plus the wild symbol to unlock the bonus round.

By way of graphics, Victorious really can’t compete with the likes of Gonzo’s Quest or Dead or Alive. It’s not a bad game really, especially if you can unlock the free spins bonus round early. However, the game tends to fizzle out after a while and significant wins dry up too. Don’t expect life-changing wins playing this game. To me Victorious is more like taking a stroll on a Sunday afternoon.