Valley of the Gods 2 Slot Review

Valley Of The Gods 2

Valley of the Gods 2 from Yggdrasil dishes up another ancient Egyptian extravagance. To such an extent it transposes into a 20,160 Win Ways real money slots buster. It’s the sequel to the popular Valley of the Gods, Yggdrasil released in 2017. Since ancient times, Egypt exerts a peculiar charm; its ancient monuments and culture still casts a long shadow over modern culture to this day. 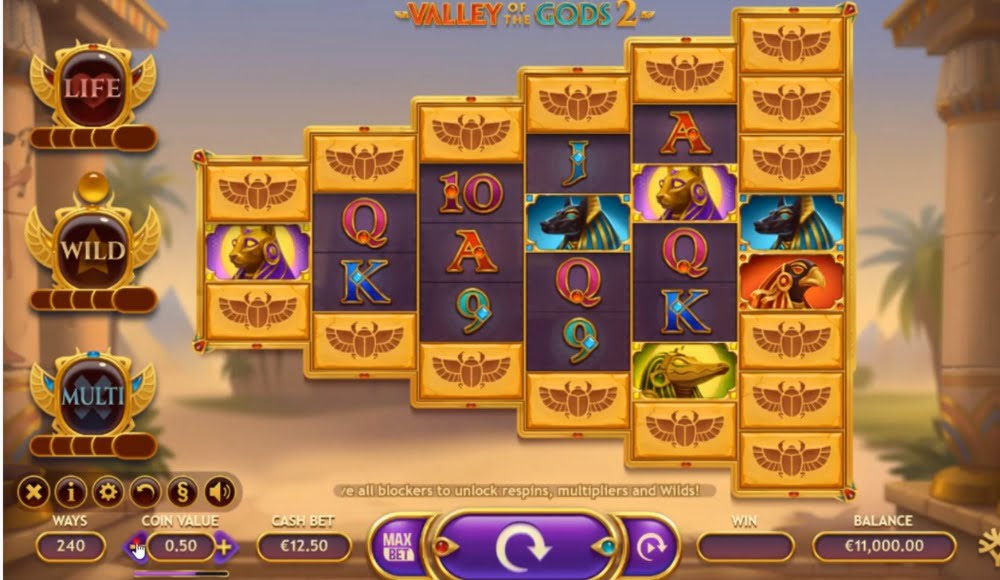 Note, we’re not in possession of all the facts yet. The full version will only hit the shelves on September 24th. What we can tell you is that the online slot features ‘Blocker Tiles’. Moreover, it has a Re-spins feature with 3 scatter collection that acts as modifiers. The visual fidelity of Valley of the Gods is something to behold. As the old saying goes: “Beauty is in the eye of the beholder“. Yggdrasil let rip with a few innovative upgrades. The layout contains 6 reels as opposed to the 5-reel rectangle of Valley of the Gods. Furthermore, the rows expand to 1-2-3-4-5-2 format. Just so you know it’s ultra high-variance that will shake any bankroll. Therefore, make sure you play the free slots version of it before you risk real money.

Three Modifier Meters flank the reel set. The audio track renders an emotional expression that will teleport slots players back to the sand-swept dunes of ancient Egypt. You can play the slots at any of our real money UK online casinos from £0.25 to £125 per spin. It looks great on any mobile phone, especially in Portrait Mode. Regrettably, American players can’t play this game due to gambling legislation (UIGEA). Luckily, our best USA online casinos offer Betsoft slots such as Legend of the Nile. 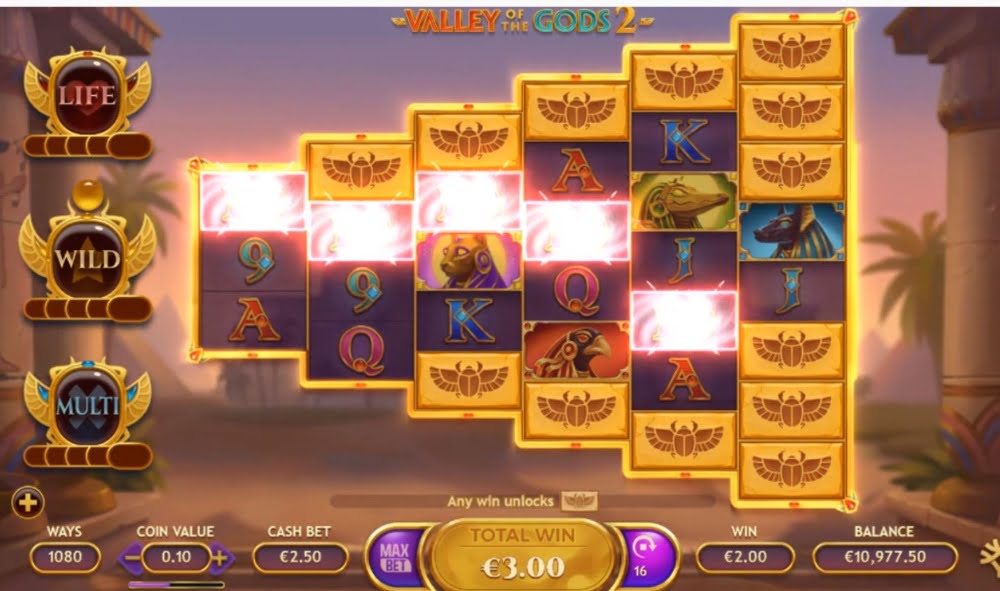 Valley of the Gods 2 has an RTP of 96.3% and a Hit Frequency of 17.7%. While the RTP is right up there we can’t say the same about the hit ratio. You can expect a winning spin on every 5 to 7 spins. When you land a combination of at least three-of-a-kind symbols you’ll receive a payout.

For every winning combo, the blockers increase from 240 Win Ways to a ginormous 20,160. In other words, when you remove all the blockers. Bear in mind, it’s no easy feat because the volatility is seriously sharp! Ancient Egypt serves as the backdrop to the reel set. There are 10 symbols that appear on the reels. The premier symbols are the pantheon of Ancient Egyptian gods. They are Bastet (cat goddess), Sobek (fertility god), Horus (creator of the sky), and Anubis (god of the dead). The remainder of the symbols that pitch on the grid are the low-value cards from 9 to Ace. 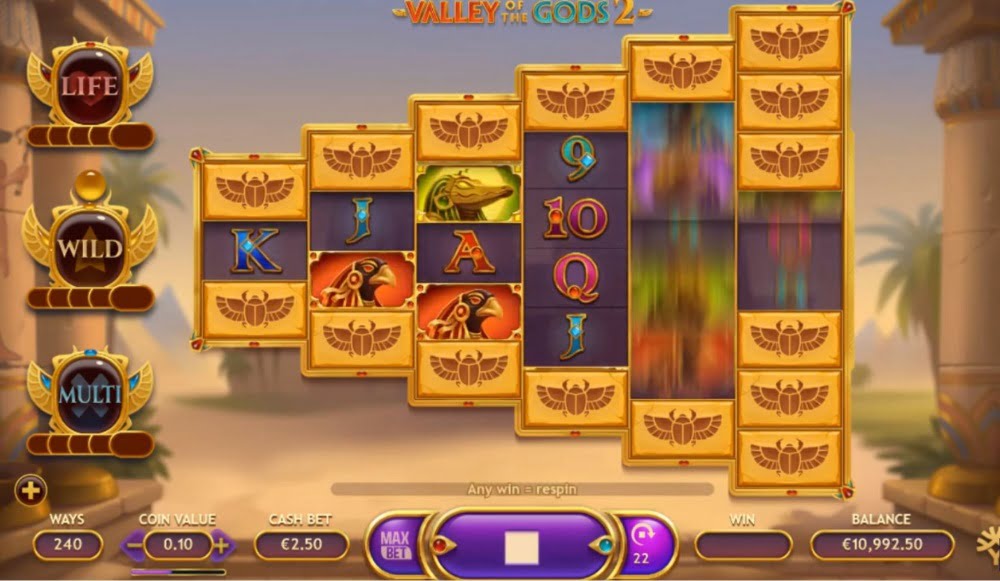 There are no wilds that appear on the reel set. However, you can trigger a Wild Reel on any random spin.

Valley of the Gods 2 plays host to a robust number of in-game features. The best way to describe them is that they’re like a jigsaw puzzle of sorts. Once you land a winning spin that’s when the scarabs go to work. They’ll fly all over the reel set exposing more blocker tiles which can lead to successive payouts from one spin. Furthermore, you can trigger the Re-spin feature on any random spin.

Now, you’ll receive an extra life once you destroy all the blocker tiles. At the same time, you’ll trigger the ‘Three Collection Modifiers’. As you notch up the payouts, the scarabs top up the modifier meters. If you land 5 red scarabs, you’ll score an extra life. While 5 blue scarabs increase the multiplier by 1+. Should 5 golden scatters pop up the Wild Reel comes into play. As long as you land a winning spin it remains on the chosen random reel. The same scenario goes for the Re-spins. If you don’t receive a payout on a re-spin, one of your scarab lives keeps the feature active. When you no longer receive any winning spins, you’ll return to the base game.

The more blockers you remove, the bigger the payouts, and the win ways can go up to a crazy 20,160. Multiplier wins, re-spins and a few Wild Reels pop up too. Due to the extreme volatility, Valley of the Gods 2 might frustrate even the high roller casino VIPs. If you grind out the features you might see some spectacular results. Also, the Hit Ratio goes up significantly in the Re-spins. Unfortunately, it disappears as quickly as the dew upon the grass once the fierce Egyptian sun rises. Yggdrasil did a sterling job (as always) with this remake. So much so that no other slots provider for real cash does historical/mythology better. If you had a blast we also recommend Jackpot Raiders.