Valley of the Gods Slot Review

Valley Of The Gods

Valley of the Gods slot is an ancient Egyptian themed medium variance game powered by Yggdrasil, it contains 5 reels, 5 rows and 45 to 3,125 ways to win.

A feature about the game that strikes us us its audio, it’s quite mesmerizing to be honest and would be a great addition to any Indiana Jones film. When you hear it for the first time you just want to pack your bags to visit Egypt to see the majestic pyramids and sphinx.

The smallest bet that can be made starts with 25 pence up to £125 per spin be it on mobile phones or PC desktops. If you’re up for it the riches of ancient Egypt await you. The top non-progressive jackpot that can be won is around 1,500x your stake.

Successive wins can be gained along with 2x multipliers and extra lives (Re-spins) which can result in loads of free spins. On either side of your screen you’ll see a ‘Blue’ and ‘Red’ multiplier with scarabs-the multiplier is increased by blue whilst the red one gives you more lives. The gods of ancient Egypt; Horus and Anubis award re-spins and multipliers every time they appear.

The game art of Valley of the Gods is well-thought out which further compliments a not so novel theme. Symbols on the reels are hieroglyphs, Bastet (cat goddess), Anubis (god of the dead), Horus and Tutankhamen (the boy king). The latter’s tomb was discovered by Howard Carter in 1903. The symbols that pay the top cash prizes of 20x your line bet are Horus and Anubis. The RTP (return to player percentage) of the slots is 96.2%. Loads of wins but they tend to be small with the odd big win in between.

Once you’ve decided on a bankroll and online casino to play Valley of the Gods at it’s time to deposit. If you accept a free spins bonus ensure that you understand its fine print. Players who plan on playing for long sessions can use the Auto Play tool, it spins the reels for you automatically.

The re-spins feature is played when you hit a winning combo, positions with scarabs on them are destroyed which increases your winning chances. A bunch of wins in one go results in a win of 3,125. Should you clear the entire reel set both Scarab Collections will be initiated, Golden Scarabs become red or blue, you’ll receive an extra life and multiplier of 2x. For every 5 scarabs collected one life will be given, if your lives end so will the re-spins. 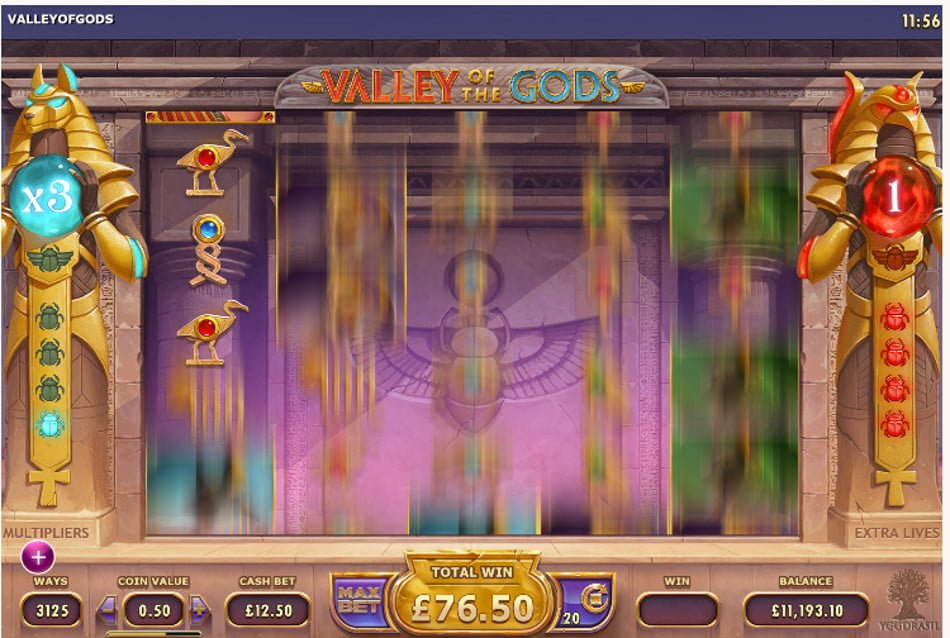 The Win Multiplier starts with 2x which increases by 1x for every blue scarabs you collect. Keep your eye on the orb to the left of your screen. The most multipliers we managed to notch up in the free mode was 3x which translated into a win of £76.50 (see screenshot).

Valley of the Gods does the basics well. Furthermore it’s not bogged down by over the top visuals instead it focuses on the payout side of the game which is always a good thing.
The trick here is to hit a bunch of wins consecutively which triggers the Win Multiplier (Blue) and the Extra Lives (Red) features. We really enjoyed playing Valley of the Gods, it’s one of the better ancient Egyptian themed slots we played in a while that can pay as much as 1,500x your stake.