Net Entertainment’s Twin Spin Deluxe is a ‘Cluster’ reel slots with 6 reels and it pays a non-progressive jackpot of 10,000 coins. Play this slot at our best rated Netent Casinos.

It contains one bonus round known as the ‘Twin Reel’ feature-starting with 2 reels up to 6 reels adjacent reels are linked displaying the same symbols. A Cluster Pays mechanic offers some big wins too, the moment you hit 9 or more cluster symbols on the reels, but more on this feature in a bit. The slots can be played from as little as 10 pence up to £100 per spin making it suitable for high rollers.

In terms of playability and looks Twin Spin Deluxe is similar to its cousin Twin Spin. The soundtrack is pretty unusual too, to be honest it feels more at him in a nightclub than in a slot game. That being said, it’s pretty upbeat and nice to listen to.

Paying symbols on the reels are cards from J to Ace, bells, bars, blue diamonds and Red 7s. The blue diamond offers the biggest cash prize, 5 of them at the maximum bet per spin pays 1,000x your stake when 30 of them appear in a cluster. Other symbols that offer top payouts are the Red 7s and the Bars, they pay up to 500x your stake. Twin Spin Deluxe offers an average payout percentage (RTP) of 96.4% to the player. 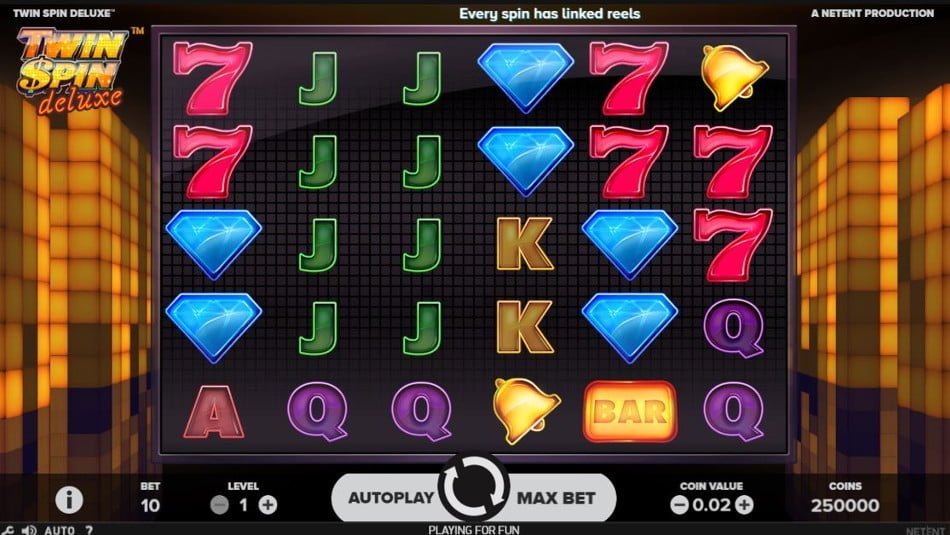 Once you’ve set your bankroll aside always play within the confines of it. If your budget is £50 don’t wager £10 per spin, instead wager £0.50 per spin. If you plan on playing for a long session use the ‘Auto Play’ feature it spins the reels for you up to 1,000 times.

Should the audio become a tad too much for you it can be muted. Because the slots contains high resolution visuals it’s best to play it with reduced settings if played from your mobile phone. Also, tune on the Wi-Fi cause it cuts through normal data bundles like a chain saw through wood.

Like its predecessor, Twin Spin Deluxe employs a Twin Reel bonus mode every spin starts off with identical/adjacent twin reels. Now, the Twin Reels expand to cover reels 3, 4 5 or 6 and they’re linked to the adjacent reels as well. The net result is it impressive cluster wins.

NetEnt’s Twin Spin Deluxe does the basics well. In its design, game mechanic and overall looks it mirrors Twin Spin but its game engine has a few tweaks here and there.

The maximum amount of cash that can be won on a single spin is 1,000x your line bet. Volatility wise it’s of medium variance, payouts are not superb during the main game but when the ‘Twin Reel’ bonus mode kicks in wins can be spectacular.