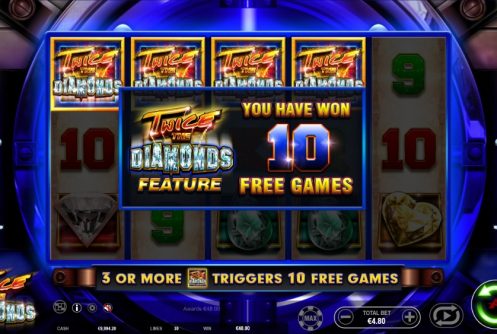 Let’s take a peek at Ainsworth Gaming’s latest slots for real money titled Twice the Diamonds. Ainsworth Gaming is still waiting for that big breakthrough that would well and truly put them on the map. Yet, they are still chugging along quite nicely as far as new releases are concerned. A diamond is a girl’s best friend, or so the saying goes. We can clearly see the target audience Ainsworth Gaming is trying to attract.

Twice the Diamonds is a low variance video slot that offers a jackpot (non-progressive) of 320x your stake. It has 30 paylines, and 5 reels – a pretty standard reel structure. In terms of in-game features, there are Wild Vaults, Free Spins and Multiplier Wilds. There’s nothing particularly exciting about its setting. As the place that you’re going to is a vault with all sorts of precious gems of all colors. Their variety is pretty decent, and the design relatively good.

The audio track in Twice the Diamonds is best described as short and repetitive. You’ll most probably flick the switch after a few spins, but hey, that’s just us. Betting-wise, you can now play Twice the Diamonds at our top 10 online casinos from £$1.20 to £$48 per spin. That’s a bit awkward no matter how you look at it, as a similarly high max bet doesn’t balance the top min bet. You can also play Twice the Diamonds free slots before you risk real money online. If you’re from Australia, take a peek at our fast-payout Australian online casinos. You even get a hefty bonus on deposit, to play the best RTG slots, mate.

Twice The Diamonds has an RTP or average return to player percentage of 96.51%. 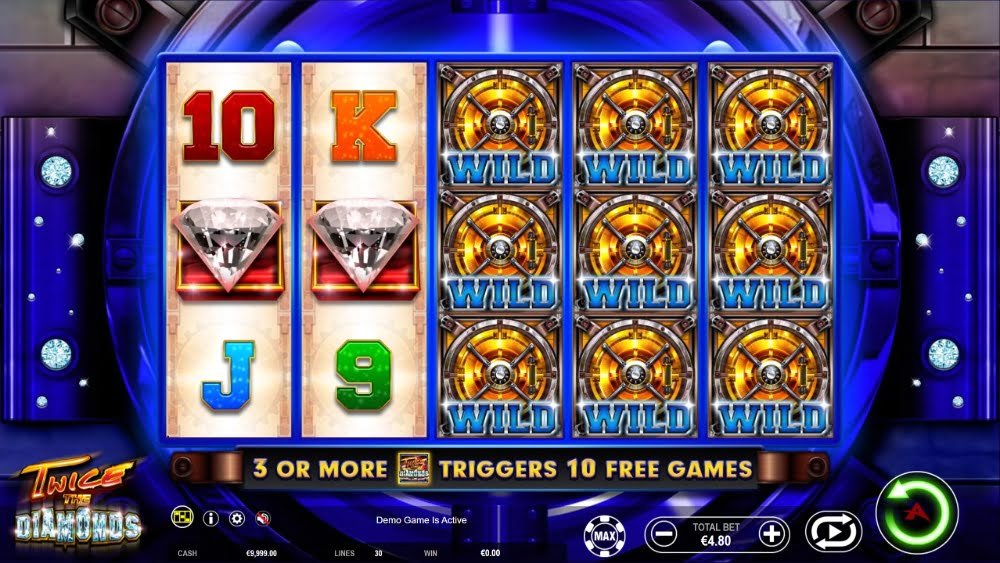 The first feature of Twice the Diamonds are Wild Vaults that come in the form of Wild symbols that can substitute for other symbols and help you out as far as the completion of winning combinations is concerned. That’s nothing new, and the unfortunate detail is that these symbols can appear only on the slot’s last three reels, so you aren’t even going to see them all that often. 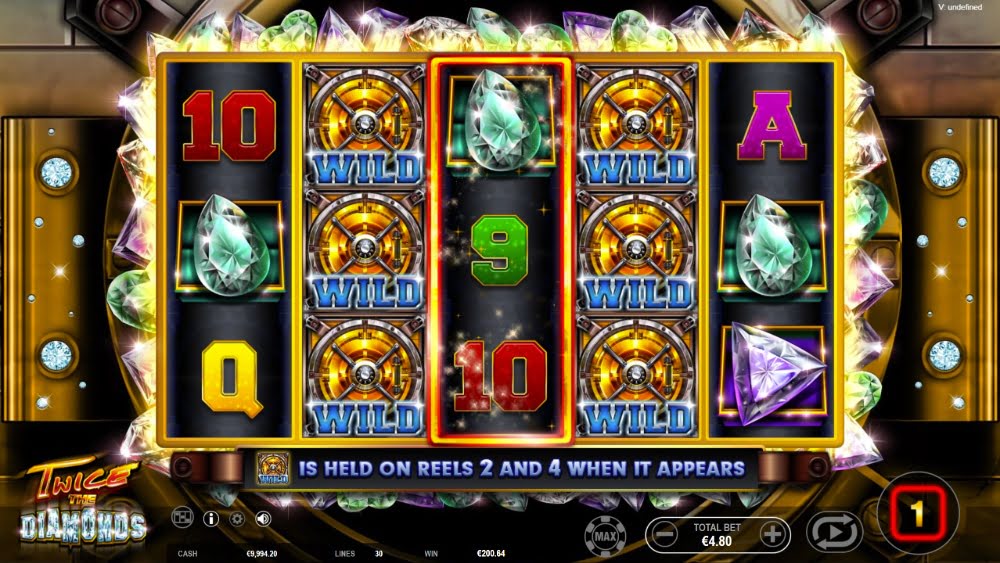 Next, there are Scatters that show the game’s logo, and that exists to get you to the Free Games. And how exactly does that happen? Well, it happens whenever you get three or more Scatters on the playing field. At that point, you’re going to collect a clean set of ten free spins, and you can then increase the total by three again by landing two or more Scatters during any free spin.

Finally, there are special Multiplier Wilds that are present on some of the reels during free spins. These can not only substitute for other symbols but also act as win multipliers for the eventual payout. The gentle touch is that the win multipliers are pretty generous, standing at x2, x4, and x8. 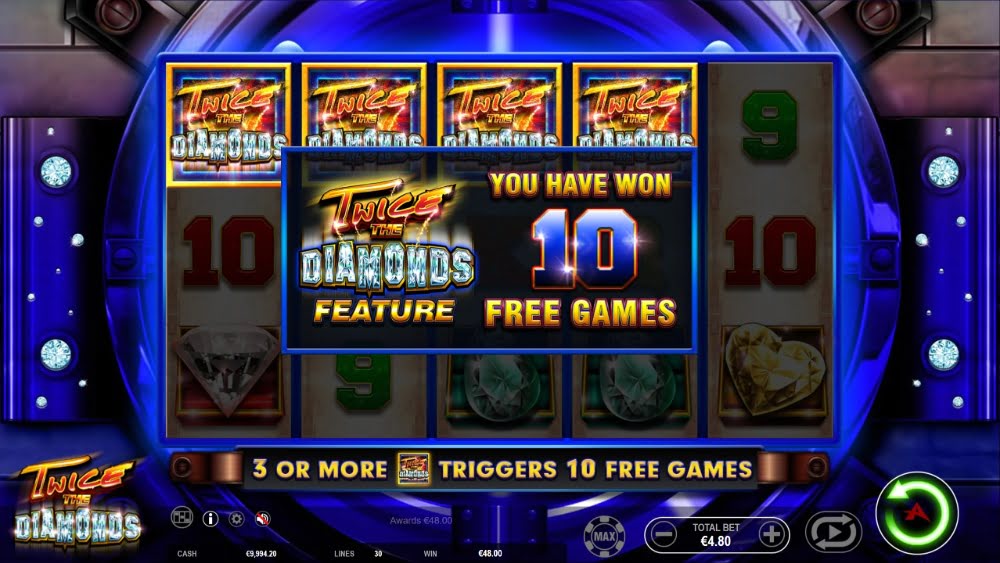 Twice the Diamonds is a solid game, but, unfortunately, it is way too bland in the key aspects for us to be able to give it a definite recommendation. It’s somewhat short on gameplay ideas. And, its visual fidelity lacks that sharpness we look for in a real money slot. However, its redeeming quality is its decent theoretical RTP – and that isn’t enough anymore. We get that there is still a market for games like Twice the Diamonds and that some players are will enjoy the slot regardless. However, it pales in comparison to slots busters like NetEnt’s, Dead or Alive 2.

What's the jackpot of Twice the Diamonds?

Twice the Diamonds is a somewhat shy game as far as its jackpots are concerned. During the base game, you can get only up to x300 of your initial stake in one go – and that increases only to x320 during free spins.

Do I Need A Big Bankroll to Play Twice The Diamonds?

Twice the Diamonds isn't a particularly great choice for players that like to play for minimal stakes, as its min bet is £$1.20. Its max bet, on the other hand, is £$48.

The theoretical return to player of Twice the Diamonds is 96.51%, which is somewhat above the current industry-wide average.

What are the distinctive features of Twice the Diamonds?

The special features of Twice the Diamonds include Wild Vault Symbols, Multiplier Wilds, and Scatters that lead to Free Games.

Click to collect: 100% up to €2000 signup bonus
Tagged with: ainsworth gaming High RTP 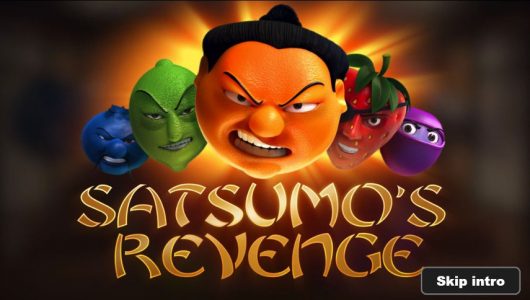 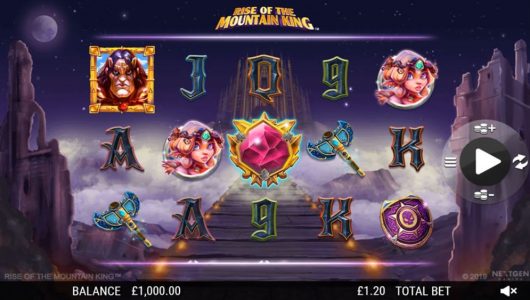 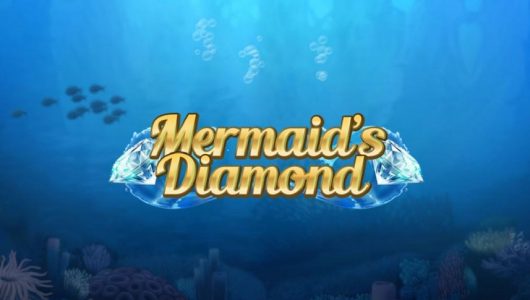