Trolls Bridge 2 from Yggdrasil is a medium-variance video slot that presents you with 25 paylines and 5 reels. It is the sequel to Trolls Bridge which was released by the vendor in 2017. When we compare the new release to the old one, the visual fidelity is notably better, and it benefits from more in-game bonus rounds, including a GoldenBet feature. The winning potential is (non-progressive) 2,000x (£280,000) your stake on a single spin/free spin.

The theme of Trolls Bridge 2 whisks you off to the fairy-tale land of the trolls. Its main selling point to players are random multipliers, colossal symbols, Bonus Cauldron, and a Free Spins feature. This high-octane 3D slots with its increasingly positive features is now playable at our best Swedish Mobile Casinos from £0.10 to £140 per spin. Compared to the previous release; the troll fortress is no longer protected by a makeshift wooden fence, but by an impressive stone-structure adorned with human skulls, red banners, flames, and spikes. This tells us that those pesky trolls are no longer the pushovers they once were.

A drawbridge serves as the backdrop for the reels while symbols on them are card suites (clubs, spades, diamonds, hearts), 4 trolls (colossal symbols), skull (scatter), and the golden wild. The most important symbol is the red-haired troll, and when 5 of them appear at any position on the reels, you’ll receive a payout of 10x your stake. Trolls Bridge 2’s RTP (theoretical return to player percentage) is announced at a very respectable proportion of 96.70%, or an edge to the house of 3.3%. 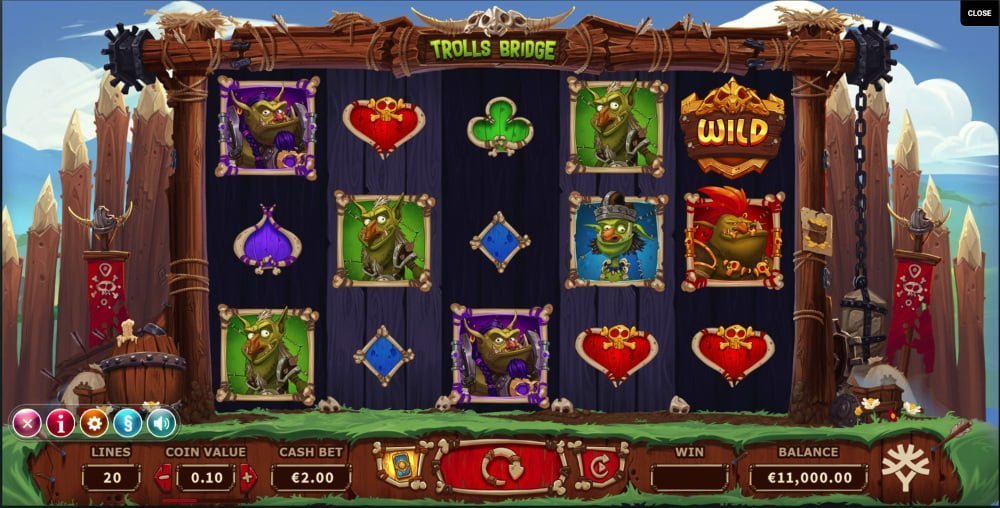 The golden wild does the usual substitution duties by replacing adjacent symbols during winning combinations, except the scatter.

The GoldenBet feature can be activated at a cost. It increases the RTP by 0.6%, and you’ll have to fork out 40% more on each spin.

The Bonus Cauldron is triggered on any random spin in the main game, providing the cauldron symbol pitches on the 5th reel. The reward here can be twofold; you’ll either gain access to the Free Spins feature, or you’ll win a cash prize valued at 50x your stake.

The Bonus Stone round is triggered on any winning spin in the base game. It’s an animated feature where a massive stone with a 5x multiplier is hurled upon the reels that awards you with a win multiplier of 5x your stake.

To gain access to the free spins 3, 4, or 5 skull scatters must appear which triggers 6, 8 or 10 free falls. You are also provided with a selection between 3, 4 or 5 picks. A new screen opens up which showcases a wall with 18 skulls. The combo you will receive depends mainly on the choices you have made. Each free spin benefits from random wilds, additional free falls, colossal symbols, more picks, and symbols that can be upgraded. It is a fascinating free spins feature because it presents you with eighteen different combinations, which makes each free spin unique.

The Colossal Symbols are not limited only to the free spins. When the 2×4 Troll symbols pitch on any random spin, the payout can be top-notch. 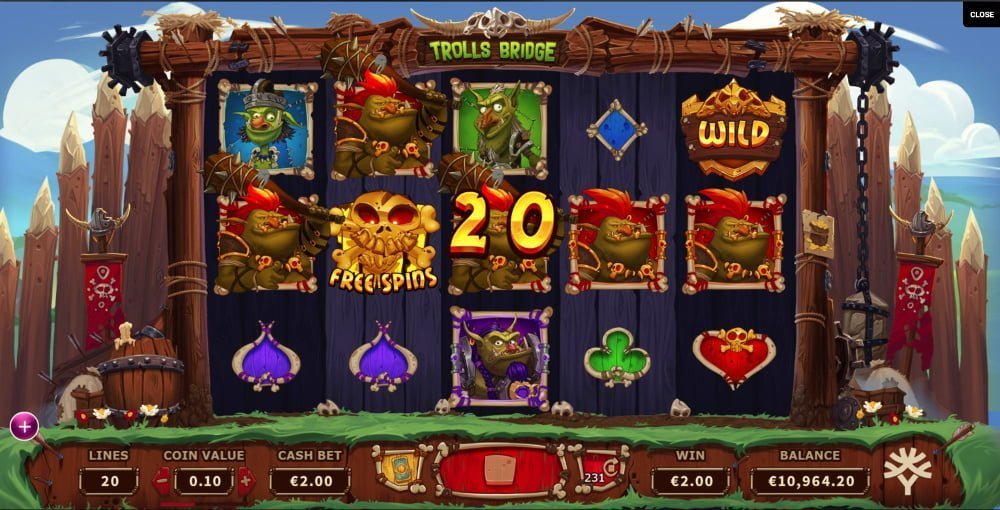 Trolls Bridge 2 remains a tight and compelling slots with bulked-up bonus rounds. The base game has enough activity in it to warrant extended sessions, especially if you hit a Colossal Symbol with a multiplier of 5x. The biggest win of 2,000x your stake paid on a single free spin, makes it an exciting and appealing game to play.

If you win the jackpot, you still won’t be able to quit your day job, but it will plug a few holes. At its core it is a smartly designed 3D slots that is highly entertaining. If you are looking for a game that combines all the elements nicely, Untamed Wilds is just as riveting.

How many special in-game bonus rounds are there?

Base gameplay cashes in on Colossal Symbols, Bonus Stone, and Bonus Cauldron features and each of them is triggered on a random spin. Then there is the Free Spins bonus that is initiated by 3, 4 or 5 skull scatters. The amount of free spins the player gets are proportionate to the scatters. The free spins is awash with colossal symbols, multiplier wins, symbol upgrades, plenty of picks, random wilds, and it can be re-triggered.