Running into battle with majestic force, wielding axes, pillaging villages and banging on shields; it’s pretty much the Viking life, not so? One can say they weren’t the most diplomatic group of seafaring hustlers in history. Which brings us to Play’n Go’s Troll Hunters 2. This slot machine is played on a 5×5 grid and it’s the sequel to the popular Troll Hunters. Central to its mechanic is a cluster-pay system where winning lines are formed when matching symbols touch each other.

“Heart pumping action is the foundation of Troll Hunters 2.”

Troll Hunters 2 is a high-variance Nordic fantasy-themed video slot where three battle-ready Viking women lead the charge. Online slot machine developers such as Net Entertainment, Yggdrasil and Play N’ Go have a penchant for depicting Norse adventures. Understandably so, because they are Scandinavian software houses and Vikings has been part of their mainstream culture for many decades.

The game dazzles with its audio track, first-rate graphics, 3 different free spins features with wilds and 3x multipliers, a Win Spin feature with a 2×2 Troll multiplier, and a huge jackpot (non-progressive) of up to 5,000x (£$€500,000) your stake. Troll Hunters 2 retains the same elements as the original, albeit just more satisfying.

Bets per spin starts at a conservative £$€0.20 to £$€100, now playable at our fast-cashout Android casinos. The slots is available in demo mode too. Hopefully, it will bring out your inner Jon Snow.  For a high-variance game, the RTP (average return to player percentage) of 96.5% is really good. Troll Hunters 2 is relatively loose. However, it’s best to play it with a minimum bet at £$€5 per spin to maximize its high variance winning potential.

Set within a challenging environment a snow-capped mountain range serves as backdrop for the reels. Symbols on them are helms, swords, tomahawks, horns, and the 3 intimidating female Vikings (Ylva, Borghild and Astrid). As soon as you get 3, 4 or 5 of them in a combo, you’ll pocket a payout of 0.5, 1 to 10x your stake respectively. The Odin wild symbol substitutes adjacent symbols when it forms a winning combination. It is also the premium symbol since 5 of them any position on the reels pays 50x your stake. 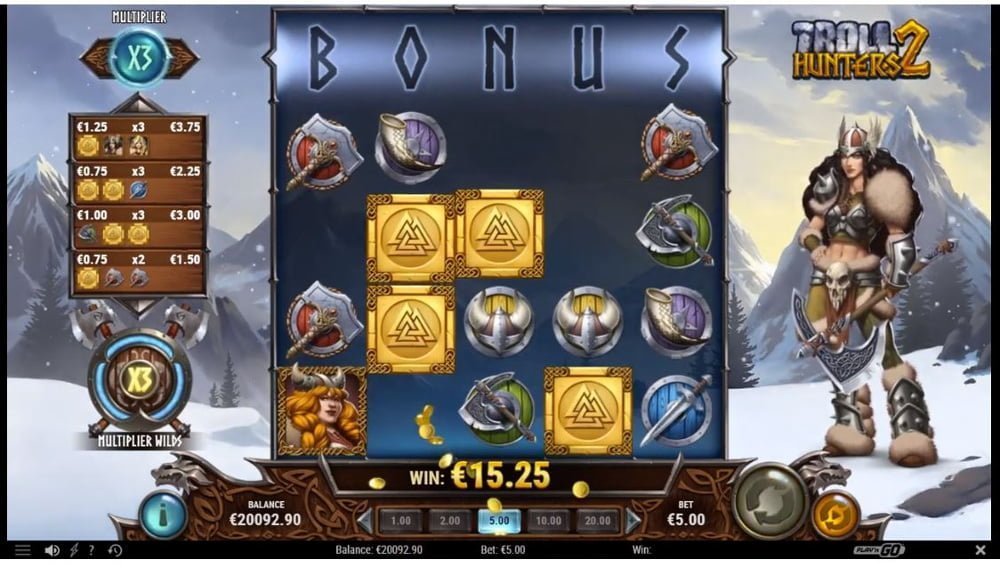 Because it is a grid slots, winning combinations are formed when 3 or more symbols (grid can turn wild) appear vertically, horizontally or in the same row. Once a winning combination occurs, symbols are removed from the reel set while new ones drop in from the top. As a result, multiple wins can be gained on the same spin. The initial win multiplier is 1x, and with each new drop, it can increase to 3x.

The reel set is flanked by a female Viking warrior and the Multiplier Wild meter. The meter is divided into three sections which is filled by 3, 4 or 5 Viking female warriors.

You can only charge it when Troll Hunter symbols form a winning combination. The multiplier wild feature is activated when you have filled the meter with three sections. One or two multipliers will then be added to the reels. The size of the multiplier (1x, 2x, or 3x) hinges on the specific Viking you have triggered the feature with.

The free spins bonus is triggered when you cleared the Bonus row after consecutive winning combinations. Once triggered, you must pick one of the following Free Spins options:

Of the free spins, the 5 free spins with the 3x multiplier is the best, although way more volatile. At an average bet of £$€5 per spin, we triggered the Free Spins feature after 60 spins and managed a win of £$€350 (70x our stake).

Once the Free Spins is active, the Win Spin feature is initiated on the condition that you have filled the meter with 3 sections. A Troll appears at the right end of your screen, and it will hurl a 2×2 troll multiplier onto the grid. Let’s say you have picked the 5 free spins with the 3x multiplier (along with the 2×2 troll multiplier) and you’re lucky enough to clear the grid, you’ll win 500x your stake.

With numerous in-game bonuses and a massive jackpot of £$€500,000, Play N’ Go’s Troll Hunters 2 gives you something to connect with and a veritable stroll through Norse mythology. Despite being an ultra-high variance slot, its best attributes are the free spins with progressive multipliers of up to 3x, visual styling, and cluster pays mechanic.

The game definitely merits your attention. Despite all its selling points to players, it still doesn’t top our favourite, Viking Runecraft.

How is the jackpot won?

The jackpot of 5,000x your stake is won in the Free Spins. To be eligible for it you must bet the maximum bet per spin of £$€100, choose the 5 free spins option with the 3x and the 2×2 troll multiplier must connect with it. Furthermore, all the symbols must be cleared from the grid. If Play N’ Go’s high-variance games is not doing it for you, then try out one of its top medium-variance slots, Piggy Bank.

What is the recommended  bet per spin?

It’s a high-variance slots, so you might want to go ‘big’ from the very first spin. Obviously, discretion is advised. Troll Hunters has plenty of bonus rounds and a cascading reel feature which blunts its volatility, or to a degree at least.