Just when I thought that Immortal Romance is Microgaming’s flagship video slots Thunderstruck II comes along. Released in 2010 it’s the sequel to the much celebrated Thunderstruck I. The key components of Thunderstruck II is its Great Hall of Spins and then there’s the Wildstorm feature that’s triggered randomly.

At the time of its release Thunderstruck II literally blew its opposition out the water and the most played slots machine at the time. It features 5 reels and 243 paylines. The RTP (return to player) is 96.6% and offers a total non-progressive payout of 2,5 million coins. Despite it’s smaller jackpot than Immortal Romamnce it offers an ocean of entertainment and pays out regularly. The theme of the game is based on Norse mythology introducing Odin, Thor, Loki and Valkyrie to the world of virtual gaming. The slots can be played at all instant play online casinos and on all mobile devices. 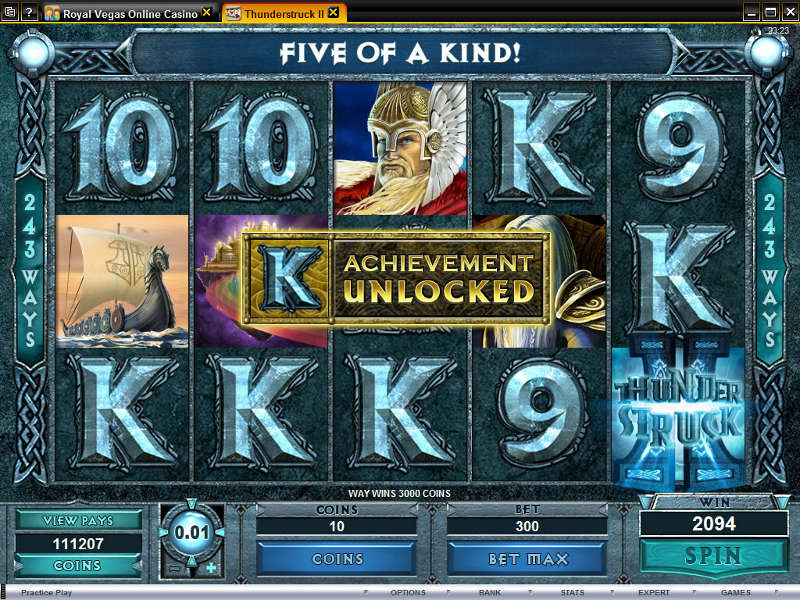 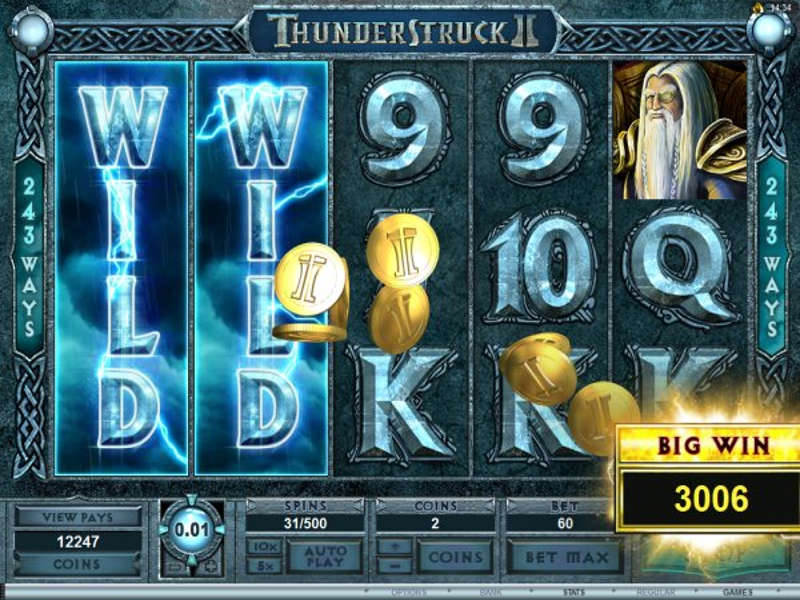 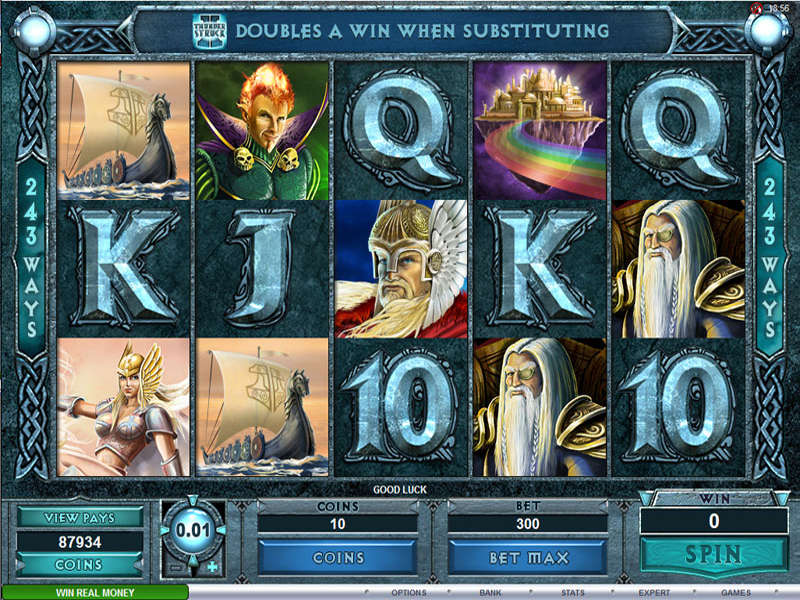 The wild icon in Thunderstruck II is Thor. This symbol replaces all the other ones except Thor’s Hammer and does not pitch during the Wildstorm feature. When the wild appears you’ll receive a free spin and if 4 or more of them pop up the payout can be huge.

The Great Hall Of Spins Game: To me this is the main bonus feature of the game. It is activated when 3 or more scatters (Thor’s Hammer) appear any place across the reels. This level is divided into 4 levels and offers tons of free spins. Each level can be triggered randomly.

Valkyrie Bonus: It’s triggered on your first to fourth triggers. For your efforts you’ll receive 10 free spins with a 5x multiplier. Additional free spins can be won if it’s re-triggered.

Loki Bonus: In Norse mythology Loki is also known as the ‘trickster’ of the gods and can be quite a mean little fellow at times. This feature awards 15 free spins and available from the 5th to 9th triggers. Symbols are turned into wilds by the Wild Magic icon when they appear on the middle reel.

Odin Bonus: When the Odin bonus game is triggered you receive 20 free spins and attached to it is the Wild Raven feature. It can be played on the 10th and 14th triggers. The raven icons comes with a multiplier of 2x to 3x times. All I can say is it would have been nice had they been a bit more, not that I’m complaining. That said, the highest multiplier can be as high as 6x.

Thor Bonus: The Thor feature is triggered from the 15th trigger and it awards you 25 free spins replete with rolling reels. The more wins there are the more progressive the multipliers become. They start off with 2x up to 5x. The net result, on every free spin you can hit a multiplier of 5 times which results in a larger payout.

There’s a nice little twist too. When you’ve triggered all 4 levels, you can pick a level you like or you can return to the Great Hall of Spins. Thunderstruck II comes with a built-in memory that saves your previous game play automatically. A bar even measures your progress. It’s definitely not a cold game and this is why I consider it a medium variance one. To me the standout feature is the Thor bonus game because of its Rolling Reels. They offers huge payouts with a multiplier of up to 5 times.

Thunderstruck II is a powerful Microgaming slots that’s rich in graphics, offers loads of bonus games and a huge jackpot payout. The game mechanics in tandem with its customization features aren’t over the top. As a result it plays like a whistle on the latest mobile phones and desktops. Just make sure that when you do play the game on your mobile device your Wi-Fi connection is on.