Thunderfist 3D slots is a ‘golden oldie’ released by Net Entertainment in 2012. I decided to review this game for three reasons: It smacks arcade-style graphics, it’s entertaining and it pays out on average after every 5 spin. With 243 paylines, 5 reels and a non-progressive jackpot payout of 1,215,000 coins this slots is definitely a crowd pleaser.

It’s based on the fearsome Samurai warriors of yesteryear. You’ll also note that the game plays off in a bamboo forest which further accentuates its theme. I highly recommend this slots because it comes with a free spins bonus game (multipliers) and stacked wild (wizard).

When four or more wizards appear on the reels during the base game you’ll win a substantial amount of cash. Paying symbols on the reels are various coloured Samurai warriors. The red karate dude pays out 100 coins when 5 of them at the highest bet level appear. Bamboo crafted card symbols from 10 to Ace pays out too but not near as high as the Thunderfist characters. Just keep in mind that the game does not pay well at low bet levels. 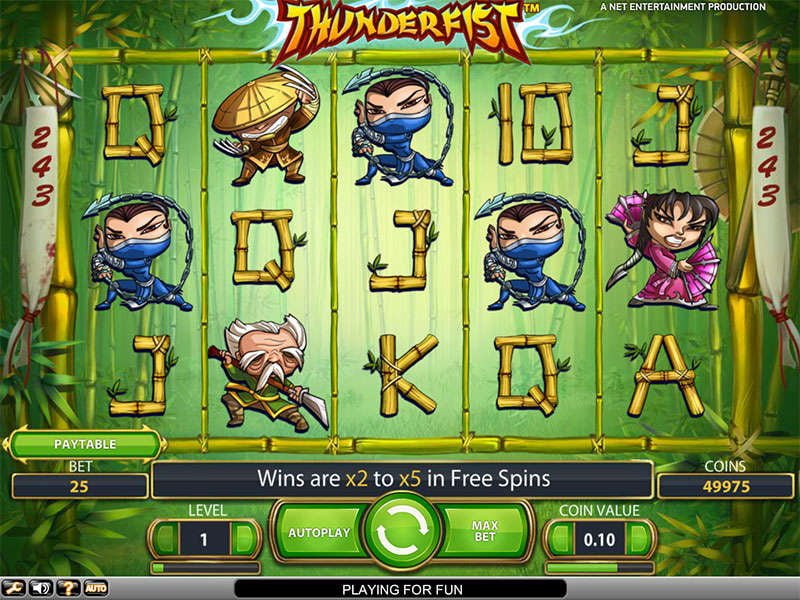 Stacked Wild: Let’s just called him the ‘wizard’. I might add he looks pretty mean too. When the stacked wild appears in a winning combination it replaces all the adjacent symbols on the reels except the Golden Gong icon (scatter). It’s a progressive icon. Why? When 3 or more of them appear across the reels the more cash you’ll win. The stacked wild is a handy feature and makes the base game more exciting. Also, each free spins win has a multiplier of 2x up to 5x attached to it. Suffice it to say payouts can be huge.

Free Spins: The free spins bonus round is the business end of any slots machine. Although I managed to hit 5 stacked wilds the free spins mode eluded me. It’s triggered by 3 or more scatters and the free spins are awarded like this:

Thunderfist NetEnt slots is refreshing and fun to say the least. If you’re out to have a good time it’s a great game. If you intend to chase the big wins low rollers stay away. It differs from most slots I’ve played when it comes to its theme and the manner in which it pays. The fact that the developers added a stacked wild feature during the base game significantly improves the return to the player. Then there’s the free spins mode. The free spins offer the best return by a country mile but the game’s fierce Samurai warriors knows how to protect its treasure. To activate it requires patience and overall smart game play.