The Mask from NextGen Gaming is a 20 payline, 5 reel medium variance video slot that pays a top cash prize (non-progressive jackpot) of 37,500x your stake on one spin. The theme of the game is based on the 1994 blockbuster film of the same name (‘The Mask’) with Jim Carrey and the gorgeous Cameron Diaz in the lead.

The game’s main selling point is its in-play bonus rounds starting with a sublime Free Spins feature where you can win as much as 25 free spins to an unlimited amount, plus they’re coupled with multiplier wild wins of 5x! During the main game there are 4 wild features (Alarm Block, In A Spin, By The Horn, Mask Unmask) that’s randomly triggered on each spin. Our initial take on the game is good; the graphics are adequate and the bonus round look pretty decent.

The same characters that appeared during the film now grace the reels. You’ll see Jim Carrey (Stanley) as the iconic ‘Mask’, Milo the Jack Russel dog, Tina (Cameron Diaz), cards from 10 to Ace (low value symbols), hat, bags of cash, scatter and the wild (mask). The most valuable symbol is the Bonus scatter, 5 of them across a payline at the maximum bet pays 500 coins. The visual display could best be described as cartoon like, colourful and energetic – just like the film!

The Mask has a RTP (average return to player percentage) of 96.5%. 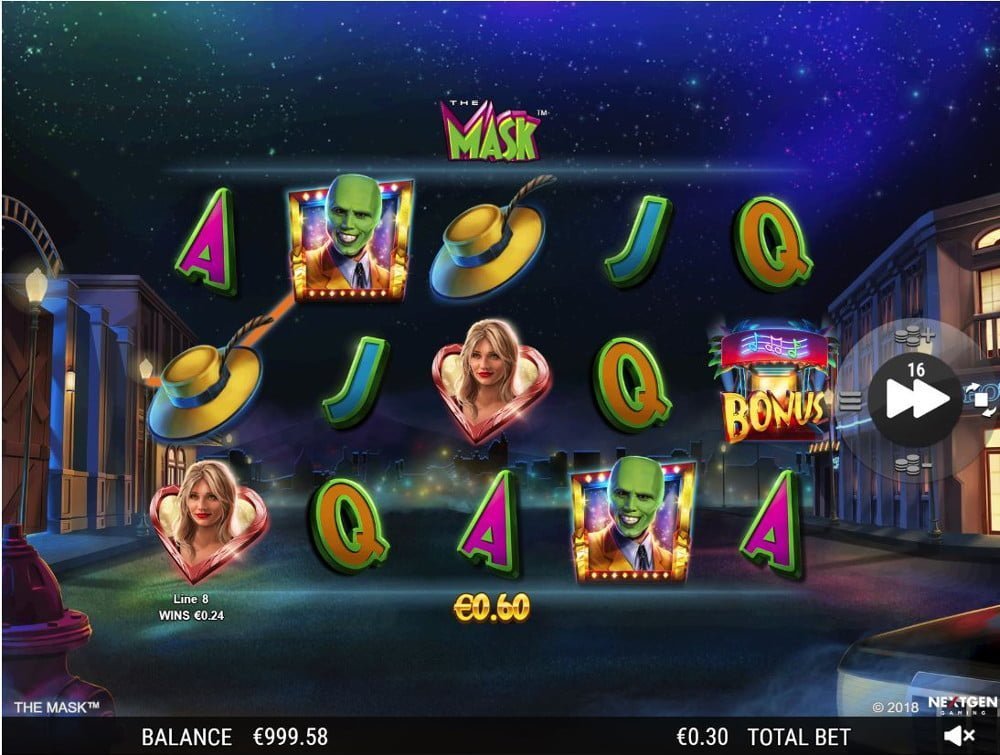 With 20 fixed paylines you can spin the reels from £0.10 to £50 per spin. The game is playable on mobile phones and PC desktops. With plenty of bonus features that can be triggered randomly on each spin there’s potential for some big wins. Winning combos occur from left to right and vice verca, for every spin, 20 paylines will cost you 10 pence. 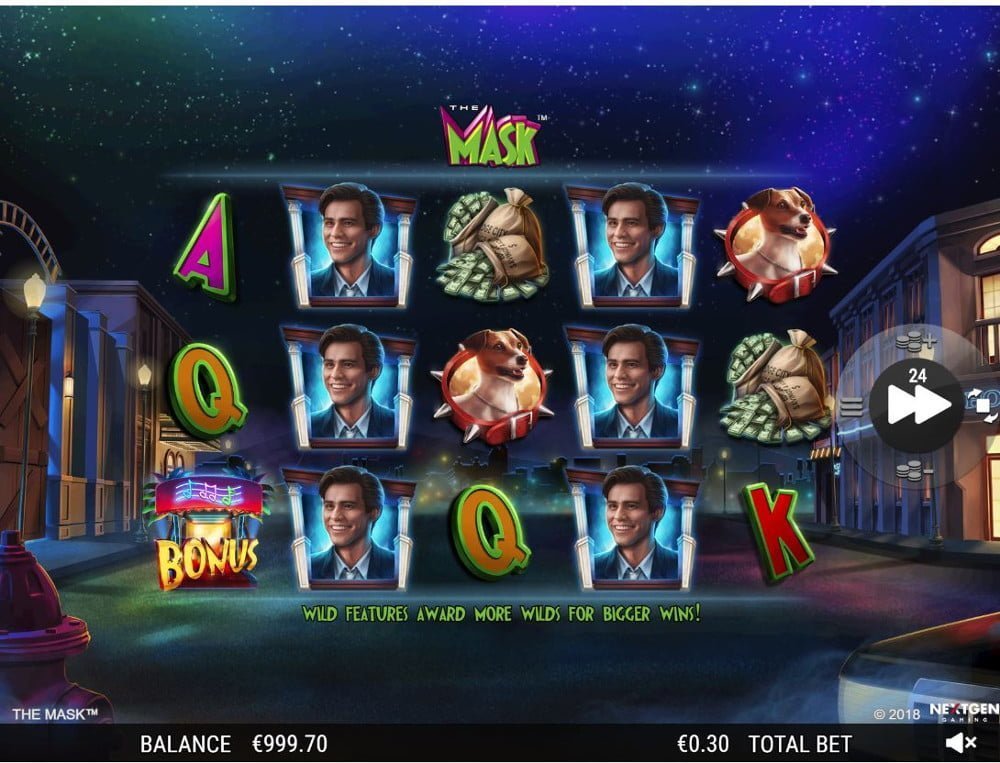 The wild symbol is the mask, winning combinations are completed by it when it substitutes symbols adjacent to it except the Bonus Scatter.

Furthermore, there are 4 bonus wild features, here are they:

The Whirlwind transforms Milo, Tina, the bags of money and the low value card symbols into wilds, keep in mind this applies to up to 3 reels only.

The remainder of the 2 bonus features are:

Here the Horn is squeezed by the Mask, the blast that eminates from the Horn transforms random symbols into wilds – up to 4 reels can be wild.

When Milo the Jack Russel appears the Mask is placed by him on a 3×3 reel set, the Stanley symbols become wilds.

An added boon to the free spins is ‘The Mask’ wild, every time it pops up during a winning free spin, the multiplier can be 1x, 2x, 3x, 4x to 5x. What makes it even more spactacular is that the 4 base game features can be riggered here too.

Actual footage from the film is shown which heightens the entertainment value of the slots. With loads of in-play bonus features, The Mask has the potential for some BIG WINS (37,500x your stake with 5x wild multiplier) especially during the free spins. Unfortunately the payouts offered by the 4x randomly triggered base game bonus modes are not as good as we hoped. The biggest payout we had on a single spin was around 25x our stake. Another slots we highly recommend from the same developer is Xing Guardian, it’s teeming with bonus rounds and it’s a progressive!.