Play N’ Go’s, Testament is a high variance real money online slots based on the Californian metal band. It’s brimming with a Song Feature, Random Wilds, and Rise Up Spins. The relationship between real money slots developers and casino patrons have been smouldering away for nearly two decades. In a sense of the word, Testament is another epic slots with a brutal volatility. Yet, one of its distinguishing traits is that it offers a massive jackpot of 20,000x your stake! The vendors biggest jackpot release to date. Testament is Play N’ Go’s latest addition to its metal series of slots, its previous release was Black Mamba.

Testament is an 80’s metal band. Their biggest hits are Into The Pit and Souls of Black, and they just released their newest album titled ‘Dark Roots of the Earth’. Testament’s riffs might be a mixed bag of knock-off fringe to some, but fans will love it. Testament shanties away from the normal Reel Structure. It features 5 reels, 3 rows and 243 to 2,400 paylines. Furthermore, it wears its graphics on its metal sleeves like a charm. Bets per spin on mobile phones range from £$0.10 to £$100.

It’s difficult not to overlook the Paytable. The symbols on the reels are Jack to Ace, swords, shields, werewolf, man on throne, skull with horns, and the vampire. They’ve also been crafted in the band’s image. The Skull is the premium symbol, 5 of them on the reels pay 12.5x your stake. It’s also the wild that pitches on any random spin in the main game. It does the usual substitution duties when it replaces adjacent symbols during a winning combination. Testament slots has an RTP, or average return to player percentage of 96.20%. The Hit Ratio is in the vicinity of 15%, so play is relatively tight! 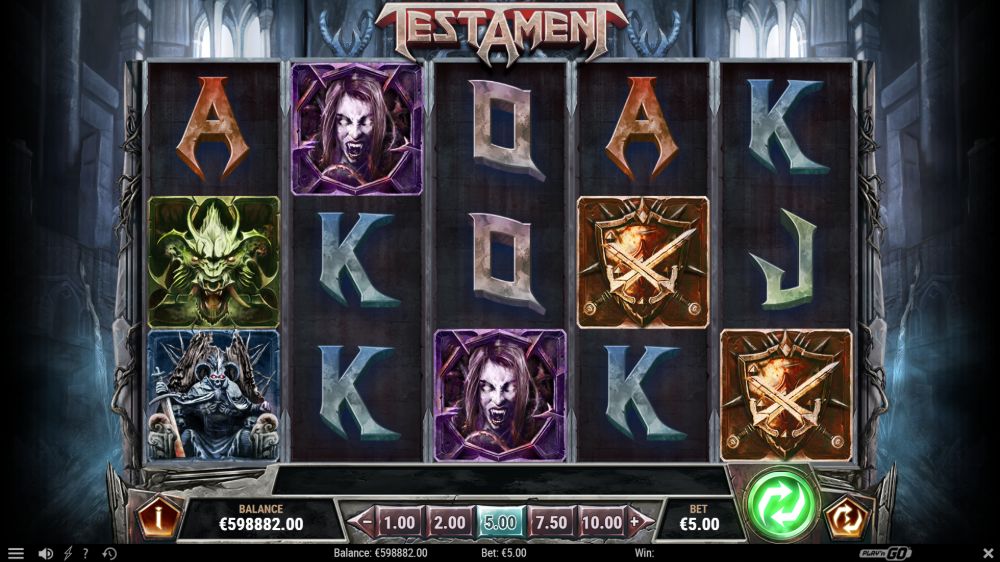 The scatter symbol is the ‘Dark Roots of Earth’ album cover. It’s an important symbol that serves a duel purpose. Two of them trigger the Song Feature that gives you 3 spins. It gives you the following rewards:

Dark Roots of Earth: A wild that appears up or down creates more wilds.
Cold Embrace: The wild remains fixed on the reels during a Free Spin.
Throne of Thorns: The reels transform into a 4-5-6-5-4 format which creates 2,400 ways to win.

You’ll trigger the 9 Rise up Free Spins feature when 3 scatters appear. There are 9 positions that are covered in blockers. Every scatter that pitches removes the blocker from the reels which increases the win ways. If you are lucky enough to remove all the blockers from the reels you’ll unlock the ‘Testament Free Spins‘ feature. All three Song Features are applied and you’ll receive an additional 3 spins. 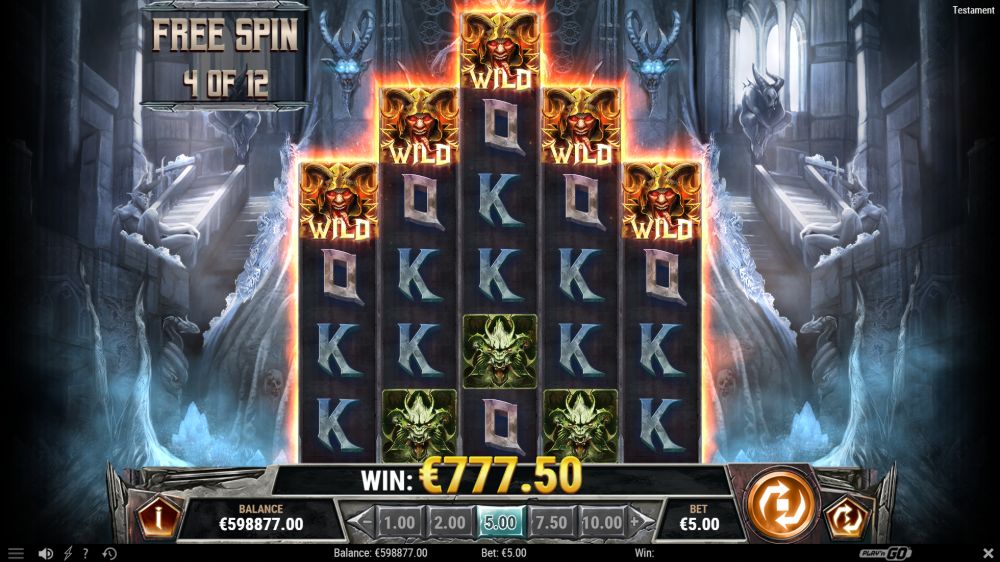 Play N’ Go stepped up to the plate with Testament. It chalks up a not-so-ordinary reel mechanic of 243 to 2,400 ways to win, and its main protagonist is the Testament Free Spins. Therefore, if you manage to pop a full screen of wilds and scatters in the free spins, you’ll win the jackpot of 20,000x your stake. Testament makes the other metal series slots look like a Sunday School picnic because their jackpots are only 5,000x your stake.It’s one of the best paying slots of all time and crammed with more metal that will slake the thirst of metal fans. All we can is, ‘Gravitas’! 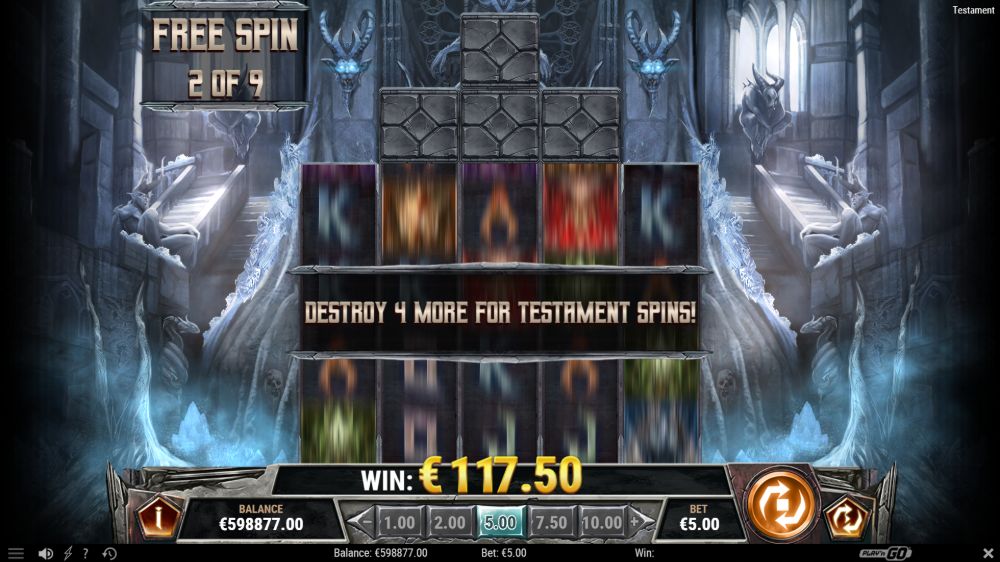 How much can I win playing Testament slot machine?

Testament has a jackpot of 20,000x (£$2 million) your stake. It’s based entirely on luck and the outcome of each spin is determined by a random number generator.