Templar Tumble from Relax Gaming is a medieval online slot with a Tumble Reel mechanic. The theme of the online slots pays homage to the mighty Templars. A religious sect that came to prominence during the Crusades. King Phillip of France banished the Knight’s Templars and the Jews from France in 1306. He owed both groups vast sums of money and saw them as a “state within a state”.

Moreover, Relax gaming caps the slot with plenty of specials. Starting with the Tumble engine, Free Spins, and Symbol Transformations. The action takes place on a 7×6 reel grid with a knight’s templar that oversees proceedings. Now, the jackpot of 17,280x your stake is huge, but it also comes with a high variance tag. Real money slots players can spin the reels from $0.10 to $20 at our best mobile casinos online.

The lightning and textures of the slot make for realistic gameplay. With a crisscrossing picturesque reel grid, it’s safe to say that it’s a slot that delivers. Furthermore, it comes in with a stead RTP and the hit frequency is not too shabby either. 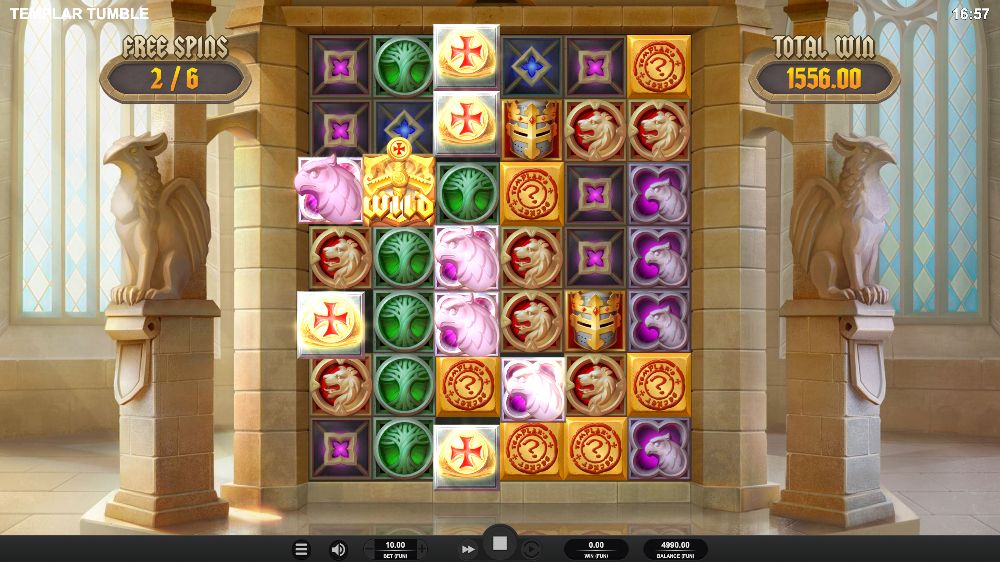 The RTP or payback rate of Templar Tumble is 96.29%. Since it’s a high variance beast that clocks a resounding 9/10 on the Whizz’s slots scale; plenty of dry spins will occur. You’ll win a cash prize when 5 or more matching symbols pitch on the grid.

The Tumble Reel feature ensures chains of wins which is great. Now, the symbols on the reels appear in red, blue, green, and purple. Moreover, the premiums are the stone lions, eagles, helm, and a ring. They offer wins in the region of 1.2x to 2x your stake. There is a Wild as well which completes winning combos when it replaces symbols adjacent to it. The wild also comes with its own special feature too.

Players from Australia can try their luck at our legal casinos online for Aussies. They offer you a staggering number of pokies, bonuses, comps and they pay fast! 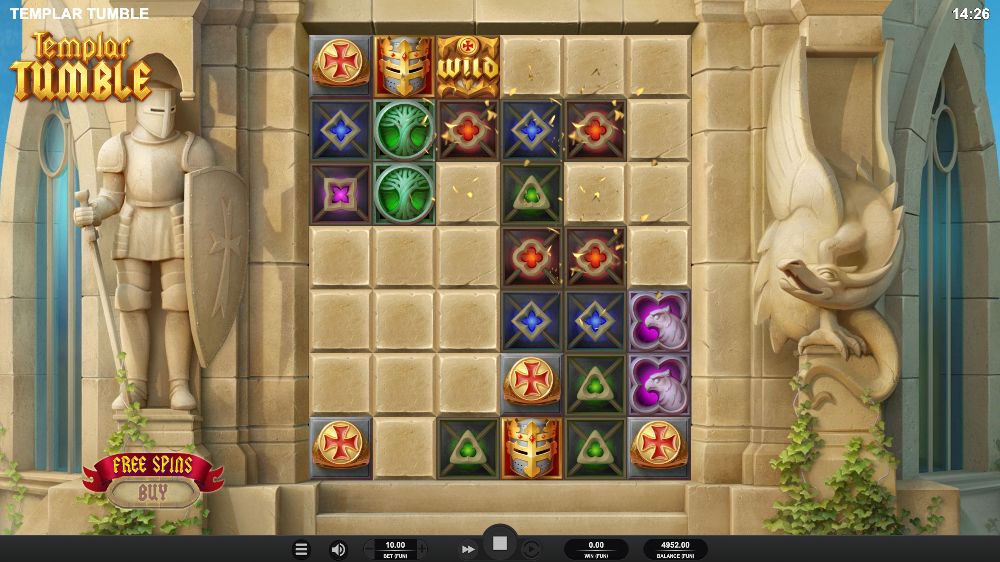 The Tumble Reel/Cascade mechanic offers its own kind of magic. It’s a great feature since it allows you to string together multiple wins on a single spin. And, it reveals additional pay symbols for even better payouts!

The Wild is prominent throughout and one of the main symbols. It responsible for triggering the Mystery Reveal bonus when 2 to 6 wilds can pitch. Furthermore, the Wilds transform up to 8 symbols into Mystery Symbols. Now, the Mystery Symbol feature is a little gem in itself because they reveal coins wins of up to 1,000x. Also, they’re responsible for extra chain wins when they change into the same matching symbol.

There are no scatters, therefore, you won’t trigger the game’s Free Spins feature the conventional way. To do so, you need to destroy all the blocker tiles on the grid. If you succeed, the game engine rewards you with 6 Free Spins.

A new screen opens up which looks like the inside of a temple. More importantly, the grid shoots up to a whopping 117,649 ways. It’s almost like a Megaways slot and there are no blockers. The wild is the main kingpin here. It transforms up to 6 symbols into Mystery Symbols. They can offer you coin wins or extra free spins.

If you’re chasing the midnight flight. You can catch the Free Spins via the Bonus Buy Option on your Mobile Phone. Keep in mind, it comes with a hefty price tag of 80x your stake. If your average bet is $5 the feature will cost you $400 to trigger the free spins feature. 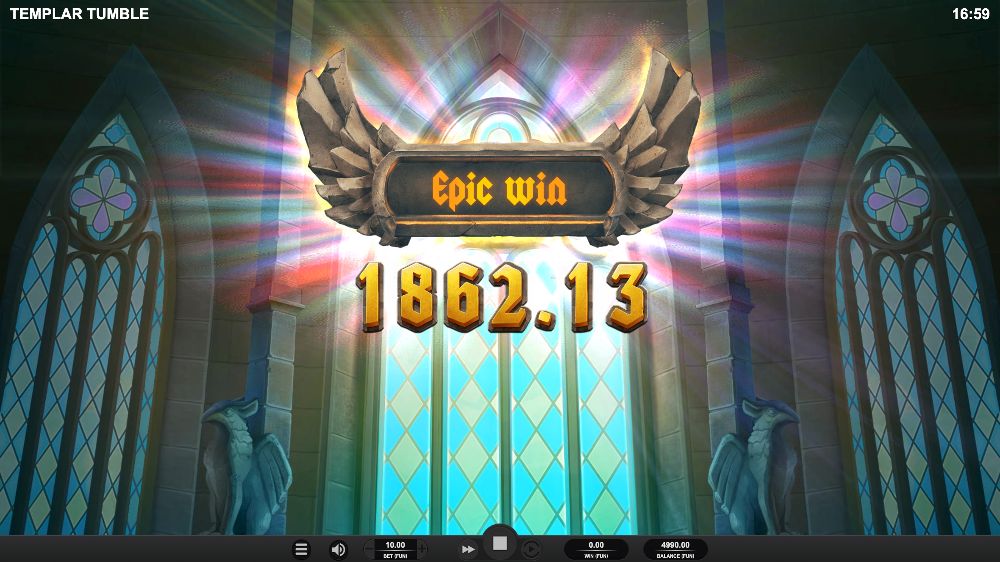 We played Templar Tumble at 24K Casino with a bankroll of $200 at an average bet of $5 per spin. We had a few practice sessions with free credits and dived straight into the real McCoy. The Tumble Reel engine in the base game is great but the big wins seldom occur. You can expect a hit frequency of around 25%. This means you’ll receive a winner on every 4 to 5 spins. Our biggest win was 30x in the base game.

We didn’t trigger the free spins feature because we failed to clear the grid. And, we only played the game for 30 spins. We estimate a trigger on every 150 to 200 spins. Needless to say, it’s not an easy feature to trigger since there are no scatters.

Initially, Templar Tumble confused us a bit because we thought it was a Megaways slot. To a degree, it is since it has the same elements. There’s the Tumble Reel feature a distinctive trait of the Megaways system. Naturally, the gameplay will be quite familiar. But, it’s on the reel grid where Templar Tumble really delivers. The graphical display is impressively realistic which gives it a welcome sense of authenticity.

The free spins feature deviates from the standard pattern; wins of up to 500x your stake or more are possible. It would have been great if Relax Gaming dropped a few multipliers. Since the volatility is sharp we recommend that your average bet should be at least $5. We find the payouts at this betting range to be good. Especially if you catch the Avalanche system on a good day.

Templar Tumble is an online slot with lots of layers. It’s ambitious, loud and it has loads of potential. Especially, if you are playing for a cash prize of more than 17,000x your stake. If you’re into the medieval them we highly recommend Quickspin’s Crown of Valor. The jackpot you’ll be playing for is 15,000x, it boasts free spins with multipliers and phenomenal graphics.