Take Olympus from Betsoft has 50 paylines, 5 reels, and 4 rows. The visual arrangement of the slot machine is good. After all, this is something that Betsoft Gaming does really well.

The online slot has a Greek mythology theme and a jackpot of 2,328x your stake. The coin betting range of Take Olympus is $0.10 to $40.

If you play the slot machine at the maximum wager you can win as much as $93,120. Betsoft says that it’s a low variance slot which kinda has us scratching our heads. Since the RTP of the game is below 96%. 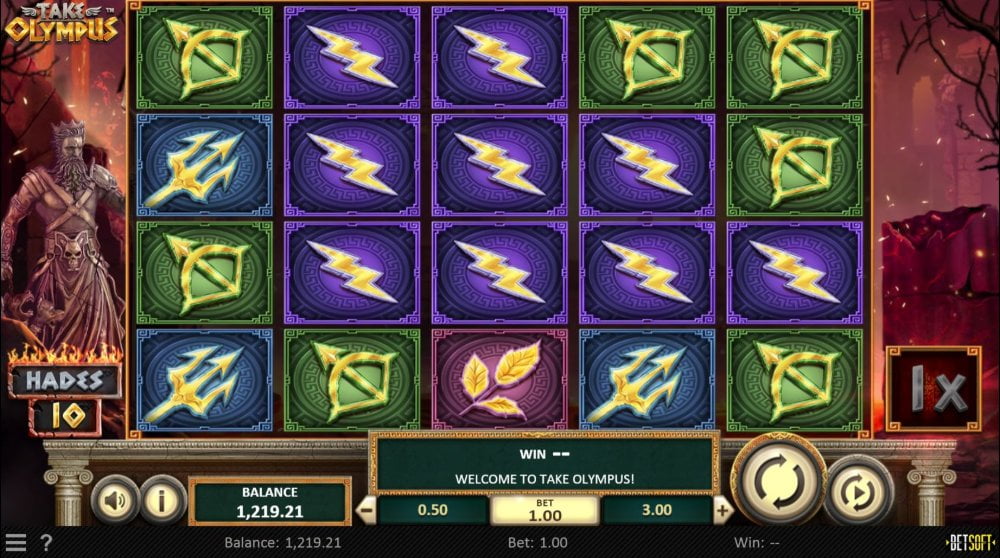 Central to the theme is the Greek god Poseidon, Apollo, and the indomitable Zeus. The Aegean Sea serves as the backdrop for the reels.

More importantly, it’s the mechanic of the real money slots that so captivates us. The slot machine focuses exclusively on 10 spin cycles. To be precise the Cycle of the Gods feature.

Essentially, the game focuses on a God Event that takes your last spin into account. Betsoft packages the slots for real money with an impressive list of bonus rounds.

There’s the Archer of the Wild, Water of Chaos, Wrath of Abundance, Spreading Pleasure, and the Allfather’s Grace features. Interestingly, it’s the most special features we’ve seen in a Betsoft slot in ages! Therefore, applause all around from us to Betsoft. Now, with so many special features in its cap; what’s the catch?

We may be wrong but we deem Take Olympus an evergreen slot. In other words, no matter how old it becomes; it’s one of those slots we can play over and over again.

Players can now play the game for real cash at our best online casinos in the USA. While you’re at it they offer you a casino bonus code on your very first deposit! Before you snatch it, check the fine print first.

Take Olympus sports an average return to player percentage (RTP) of 95.49%. If you decide to play it with a bonus, play it at an average bet of $5 per spin. Moreover, it’s the maximum wager most online casinos allow with a bonus.

During our testing phase, we noted that there is a strong correlation between the RTP and the Hit Rate. If we go by the game’s RTP, we received a winning spin on every 3rd spin in the base game.

That translates into a hit rate of 33%. Strictly speaking, Take Olympus offers plenty of winnings spins but the payouts are quite small. If you want to win big you must trigger the game’s bonus rounds.

The symbols on the reels are the 5 gods of Greek mythology. They are Poseidon, Apollo, Zeus, Hades, and Aphrodite. Other symbols include a trident, bow, leaf, lightning bold, wolf, and the Wild. 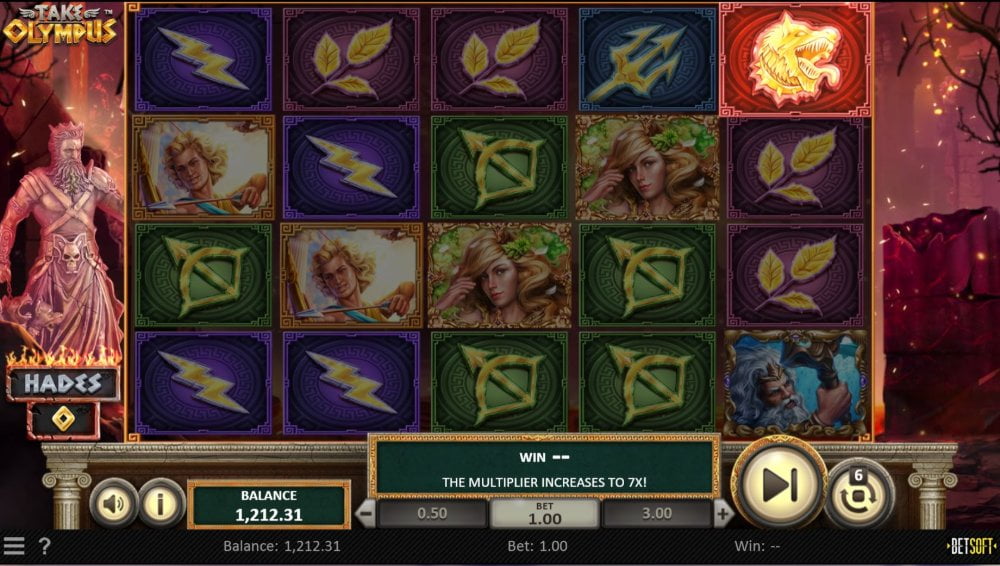 In the opening paragraph, we mentioned that play occurs over a cycle of 10 spins. Betsoft names it the Cycle of the Gods feature; it works as follows.

The game randomly triggers any of the five gods’ features. And, unleashes its power on the 10th spin. After every 10 spins, the game resets again. Tt then chooses a new Greek god for the next cycle. Let’s take a look at the different gods:

Apollo: Archer of the Wild – When the Apollo cycle is in play, Apollo or bow symbols pitch on the reels. On the 10th spin, the slot machine transforms them into wilds.

Aphrodite: Spreading Pleasure – As you spin the reels you either snag Aphrodite or leaf symbols. On the 10th spin, the symbols become Mystery Boxes and then into normal symbols. There are no wilds present on the reels.

Hades: Wrath of Abundance – Hades the god of the underworld drops multiplier Hades or Cerberus symbols. Besides, on your 10th spin, the online slot adds a multiplier value to it.

Poseidon: Waters of Chaos – Keep an eye on the Trident and the Poseidon symbols. Every time they pop up they increase the counter for re-spins on your 10th spin. Poseidon is the god of the sea in Greek mythology.

Zeus: Allfather’s Grace – Needless to say, this is the most lucrative feature. Zeus takes the powers of the previous gods that pitch as wilds.

Now, when Zeus covers an entire reel with four symbols. You’ll receive 10 free spins on the condition the other four gods pop up onto the reels. Moreover, during your allotted 10 free spins you can expect mystery symbols, wilds, multipliers, or respins.

What’s the golden rule of online slots play for real money? Whether it’s a low or a high variance slot, each slot has a negative expectation.

No matter how smart you play the house will always win over the long haul. As long as you keep this in mind; you’ll be good as rain. Since Take Olympus is a low variance slot game it’s easier to initiate its special features.

We played the slot with a bankroll of $100 at an average stake of $1 per spin. We believe that 100 spins gave us a proper insight into the game’s special features and mechanics. Moreover, the game triggers a random god feature on every 10th spin.

The payouts were okay, especially for a low variance game. The biggest cash prize we won was $49.80 during the Apollo: Archer of the Wild feature.

That’s nearly 50x our stake which is phenomenal. Thanks to a bunch of wilds that popped up on our 10th spin. After the big win, the game went into “tight mode” offering a few wins of 5x to 8x.

We could not initiate the Zeus: Allfather’s Grace feature – hard as we tried.

Betsoft’s Take Olympus is an entertaining slot with a slew of treats. We like the game’s hit rate of more than 33% but unfortunately, it kinda drops the ball with the RTP. Even though, it’s a low variance slot you can still experience 5 dry spins in a row.

Beats us as to why Betsoft gives us a low variance slot with an RTP that is below 96%. Then again we’ve seen high variance slot games with RTPs that border on 97%.

Luckily, it makes up for it with a decent hit frequency. So, it can be a case where Take Olympus gives with the one hand and takes with the other.

The other thing we like about the game is that it guarantees you a special feature on your 10th spin. Of the in-game features the Zeus: Allfather’s Grace is by far the best.

It gives you not only 10 free spins. It incorporates the special features of the other gods. Consequently, you can score re-spins, wilds, or multipliers along with your 10 free spins. Finally, the jackpot of 2,328x is tip top too.

If you had a blast and you want to play something similar. Check out Quest to the West. The jackpot is 5,000x, it offers Walking Wilds, Free Spins, and a Buy Option.