T-Rex 2 is RealTime Gaming’s sequel to 2009’s T-Rex. By way of its original design and styling, nothing much has changed. The slot machine’s theme is all about the most ferocious predator that ever walked the earth…the indomitable Tyrannosaurus Rex.

This fierce land animal lived approximately 65 million years ago during the Late Cretaceous period and dominated the forest river valleys of North America. Unlike its previous release, Storm Lords, T-Rex 2 is a progressive jackpots slots with 25 paylines that is played on a 5×3 reel set.

If we look at the in-game bonus rounds, it has way more than its predecessor. You’ll see plenty of multipliers, a T-rex scatter, Free Spins, Terror wilds and the standard wild. Playable at our fast-cash out Australian online casinos, it loads quickly on Android devices. Bets per spin start at $0.25 to $25 while the coin denomination goes up to a maximum of $1.

Since it is a progressive jackpot, it is linked to RTG’s pooled network of games. The jackpot of 12,500 coins can be triggered on any random spin, which makes it an exciting and entertaining slot to play. The main symbol is the T-Rex. Other symbols on the reels are dinosaur eggs, pterodactyls, low-value cards from 9 to Ace and the triceratops. The low paying card symbols offer small payouts because they appear often.

The theoretical return to player percentage offered by T-Rex 2 is 95.5% or an edge to the house of 4.5%. 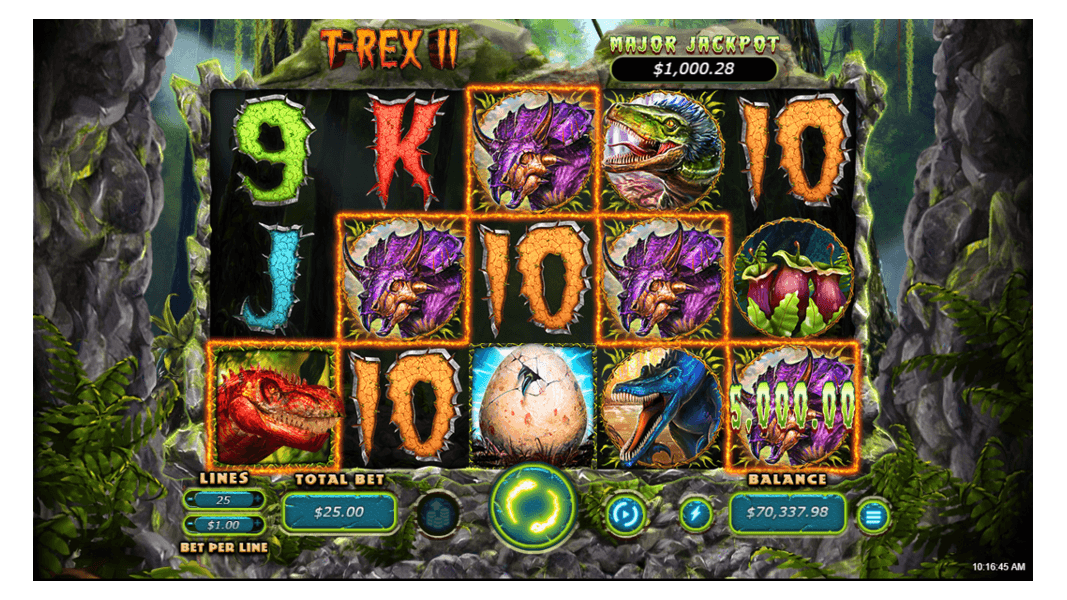 The T-Rex serves as the game’s wild. Winning combinations are completed when it substitutes symbols adjacent to it (except the scatter.) Another interesting concept about the wild is that it comes with a multiplier of 2x, which doubles all wins. 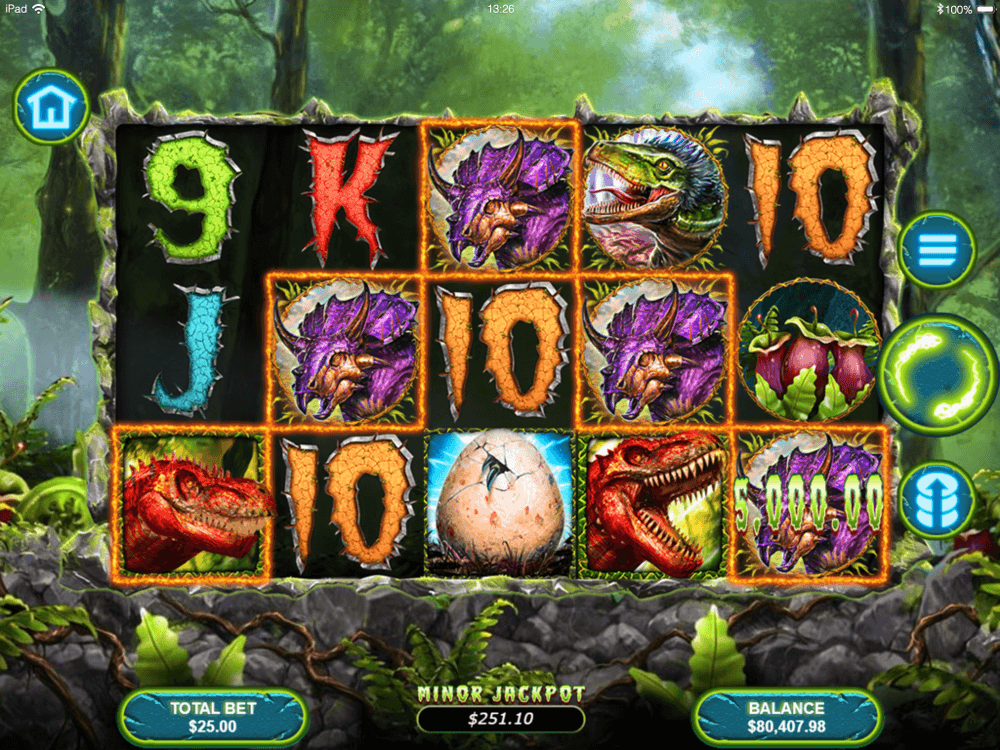 T-Rex 2 snuck in through the backdoor in our view. We won’t label it as a ‘wow’ progressive, yet a few things do count in its favor. It is better than the original T-Rex, it offers more unique features, and its jackpot is more significant. As an alternative, we highly recommend one of RTG’s treasures for 2019, The Mariachi 5. This slot machine offers a cracking jackpot of up to 6,000x your stake, 5 free spins with 8x multipliers on each free spin, and an RTP that borders on 97%.

In Which Bonus Round Can I Win The Jackpot?

The jackpot is won in the Free Spins mode when you have lined up the 2x wild multiplier at the maximum bet per spin.

If I Play With Bitcoin, Do I Qualify For a Bonus?

You most certainly do, although the Bitcoin casino bonus is entirely optional. Red Dog Casino is running a spectacular Bitcoin casino match bonus of 225% plus an extra 20%! To qualify for the bonus, a deposit of $20 in Bitcoin-related virtual currency is all that’s needed. The code can be claimed up to a maximum of 5x; that’s a whole lot of BTC bonus right there! You can withdraw your winnings once you have completed the wagering requirement of 30x the deposit and sum of the bonus.