Microgaming’s Super Sumo medium variance video slot is the first collaboration between Microgaming and Fantasma. The game can be played from as little as 25 pence on mobile phones and PC desktops. It can be played in the free mode on both platforms as well. The symbol that pays the biggest cash prize is the smiling sumo wrestler, 5 of them at the maximum bet pays 500 coins.

Super Sumo slots has 25 paylines, 5 reels and offers a top non-progressive jackpot of 500 coins. Yup you’ve guessed it, the theme of the slots covers Japanese sumo wrestling which is a very popular sport in the country. Central to the slots is its ‘Happy Wilds Sticky Re-spin’ feature and Free Spins bonus mode. Wilds play a prominent role in both features so keep a close eye out for them.

Against the backdrop of the reels you’ll see a magnificent blue sky, cartoon-like graphics such as pagodas, temples, trees, cards from 10 to Ace and 4 different Sumo wrestlers. Interestingly each wrestler has its own emotion ranging from fear, disgust, sadness and anger. Graphic wise the slots is top draw. If you hit a winning combination you’re cheered on by the Sumo wrestlers.

Super Sumo has an average return to player percentage (RTP) of 95.8%. 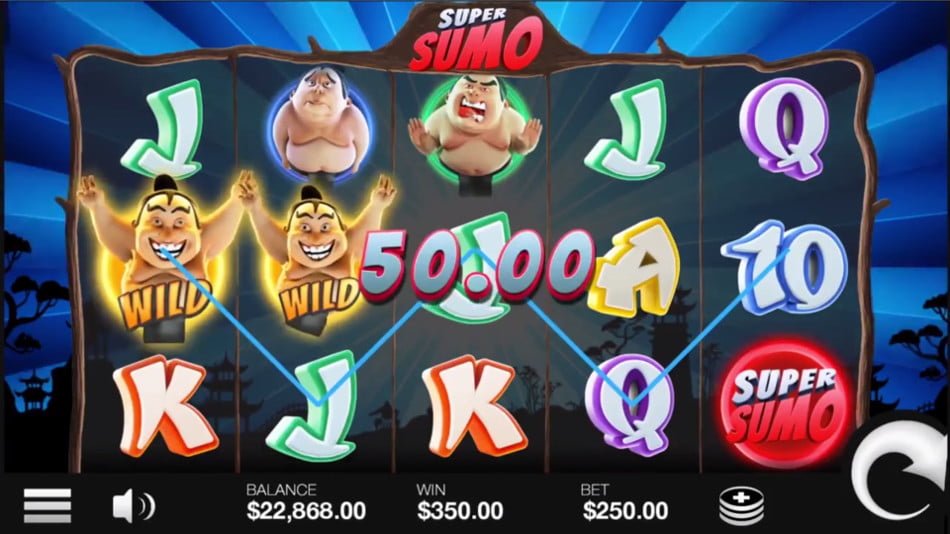 Once you have selected the proper coin range you’re good to go. Make sure that it reflects your bankroll accurately and that you don’t wager above your means. Bets can be made from 25 pence up to 25 pounds per spin. The audio of the game is great on the ear too and augments the theme of the slots right down to a ‘T’.

The wild symbol is the smiling sumo wrestler, it completes a winning combination by replacing all the other symbols except the Super Sumo symbol (scatter).

The Happy Wilds Sticky Re-spin feature is triggered when 2 wilds pitch. A re-spin will be awarded where the wilds stick upon the reels-the re-spins feature ends when there are no more wilds.

The free spins feature is initiated when the Super Sumo scatter symbol appears simultaneously on reels 1, 3 and 5-10 free spins will be awarded. The free spins mode cannot be re-triggered, but should the smiling sumo pop up on the reels 1 random reel will be turned wild on every free spin.

Super Sumo is one of those slots that goes beyond the surface. It’s an entertaining medium variance game that pays as much as 500x your stake. However, instead of paying the biggest wins during the free spins feature, it’s the Wilds Sticky Re-spins mode that comes up trumps here.

The free spins feature is a tad more difficult to trigger, payouts can be good if there’s a wild reel on every free spin. Overall I must commend Microgaming and Fantasma on their first collaboration.