With its previous release Coywolf Cash, Play N’ Go went nuclear as far as high volatility real money slots go. Its next online slots titled Sticky Joker is not near as brutal, and there is nothing flashy about it since it’s a typical Vegas-style slot. Play N’ Go went for a more stylized reel structure with Sticky Joker. It has 5 paylines, 3 rows, and 3 reels while the graphics have hues of blue, which has a calming effect.

Sticky Joker is a medium variance video slot that whisks you off to the hallowed halls of Las Vegas. You can win up to 1,650x your stake (£$165,000) on a single spin. From the very first spin, it does the basics well with a Re-spin feature and a Wheel of Multipliers. The symbols that appear on the reels are lucky 7s, bars, stars, cherries, lemons, grapes, and plums. The top symbol is the Joker Wild when 3 of them pitch you’ll win 8x your stake. You can spin the reels from £$0.50 to £$100 per spin. Essentially, Sticky Joker’s betting range makes provision for low, medium, and high rollers. Given the size of the jackpot of 1,650x your stake, we don’t think it will catch the big spenders.

The RTP or average return to player percentage of Sticky Joker is 96.74%. We can’t say with absolute certainty what the Hit Ratio is, but if we can make a calculated guess based on its volatility (6/10), we’d say it’s around 22%. You can expect a winning spin on every third to fourth spin. 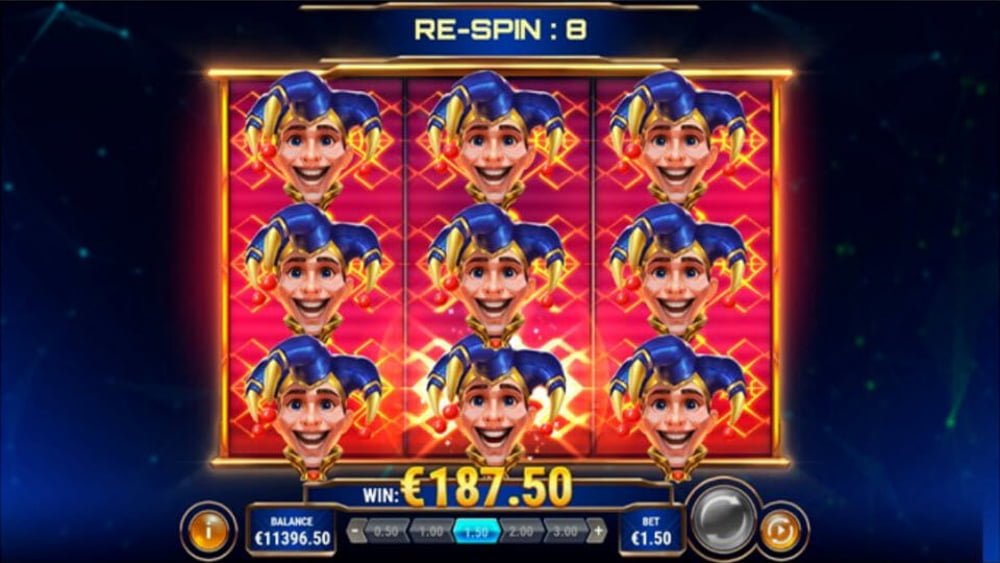 The Joker Wild is the boss in Sticky Joker. When one or more Sticky Jokers pitch, they trigger the Re-spin feature. And, should another wild appear during the re-spin, the wild sticks to the reels, and it triggers an extra re-spin. You’ll receive re-spins as long as the Sticky Joker wild appears.

You’ll trigger the Wheel of Multipliers feature when 4, or more wilds pitch. There are 12 segments on the wheel, and each segment on the wheel has multipliers of 2x, 3x, 4x, 5x, and 10x. To see the cash prize, you’ll win, you must spin the wheel. Once it stops on a multiplier, the wins you gained in re-spins, is applied to the multiplier.

In hindsight, Sticky Joker is like an elephant without tusks and will appeal only to die-hard fans. The re-spins feature is easy-to-trigger, which keeps the bankroll ticking, but not by much. If you want to win the top cash prize, The Wheel of Multipliers is where you want to be. Just don’t bank on it entirely because four sticky jokers seldom pitch. The top cash prize of £$165,000 is nothing to write home about. If you want something that requires a big budget, we highly recommend Yggdrasil’s Ice and Fire.

Which online casino offers me the best return for Sticky Joker?

We played Sticky Joker at the following European online casinos, 24K Casino, SlotV, and Trada Casino with a bankroll of $50. It’s not much, but it gave us an indication that the game’s RTP of 96.74% differs from one casino to the next. We made a profit of $10 at 24K Casino, but we were not so lucky at the other two casinos. Even though it’s quite easy to trigger, the Sticky Joker re-spins payouts were small. Further, when we finally triggered the Wheel of Multipliers the top multiplier we got was 2x.