Since its release in 2012, Starburst non-progressive video slots made a spectacular entrance to the world of online gambling. Players were hooked from the very first spin. Once again Net Entertainment transcended the boundary when it comes to traditional slots play. It features 10 paylines, 5 reels and an average return of 96% to the player (RTP). Besides desktop, the slots plays like a charm on various smartphone devices like Androids, tablets and iPhones. 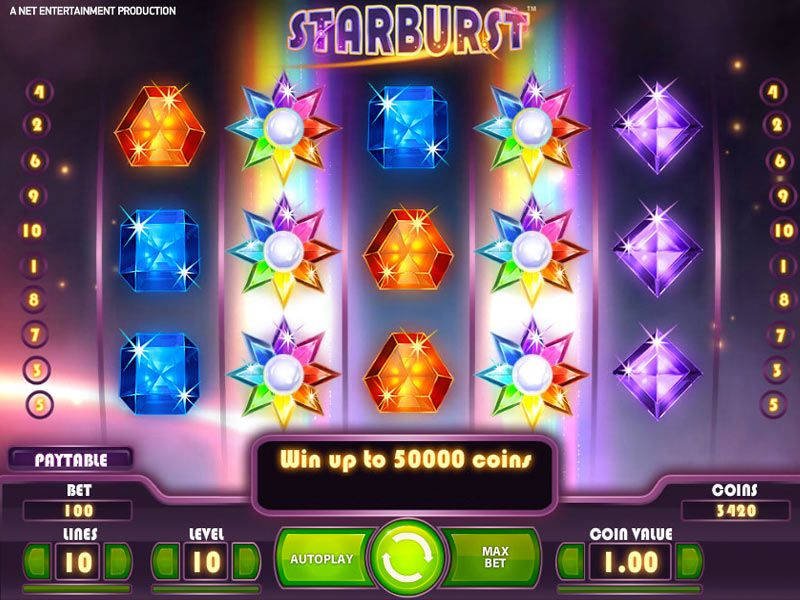 Compared to other NetEnt video slots, Starburst is not that rich in 3D animations. But, it’s the game’s simplicity that steals the show and herein lies its strength. No wonder most NetEnt online casinos offer it as their game of choice in their bonus offers to players. Even though it only features 10 paylines and only one bonus feature-it will leave your wallet ‘cosmically happy’.

The coin denomination ranges from $0.01 to $1. The max jackpot win is $50,000. In addition to the base game it features wilds and free spins. Unfortunately no multipliers feature in the base game. When the wild Starburst symbol makes it appearance on reel 2, 3 and 4 it substitutes all the symbols on that reel and triggers a re-spin.

One of the features that makes Starburst video slots all the more impressive is its two-way-wins. Meaning that the slots pays out regularly and wins can be impressive. However, some players said that it can be ‘colder than a dog’s nose’ at times. Don’t let this deter you since payouts vary from casino to casino. Each slot game’s payout is random and determined by a random number generator (RTG). So no foul play here.

As I mentioned throughout this review, Starburst video slots does not offer a slew of graphics and it’s a low-variance game. Due to the game’s simplicity and regular payouts it still attracts loads of players. Just a pity the developer didn’t add more paylines and additional bonus features to it.