Sheriff of Nottingham 2 slot from iSoftBet has a 5×3 grid with 20 paylines. More than usual, this is an exciting theme that conjures a time when heroes still existed.

Now, the Sheriff of Nottingham was quite the character. According to legend, he was a thorn in the side of Robin Hood and lady Marian.

The betting range of Sheriff of Nottingham 2 starts with modest bets from $0.20 to $20 per spin. Which is ideal if you want to test the slot cheaply.

High rollers can try their luck at the maximum wager by winning the jackpot of 7,515x your stake. Moreover, the Sheriff of Nottingham slot clocks a 10’er on the Whizz’s slots scales.

So, if you’re thinking that payouts will come thick and fast here think again.iSoftBet really packs it in with Respins, Mystery Symbols, and Stacked Wilds.

On that note, let’s check out what Sheriff of Nottingham 2 has to offer in this slot review. 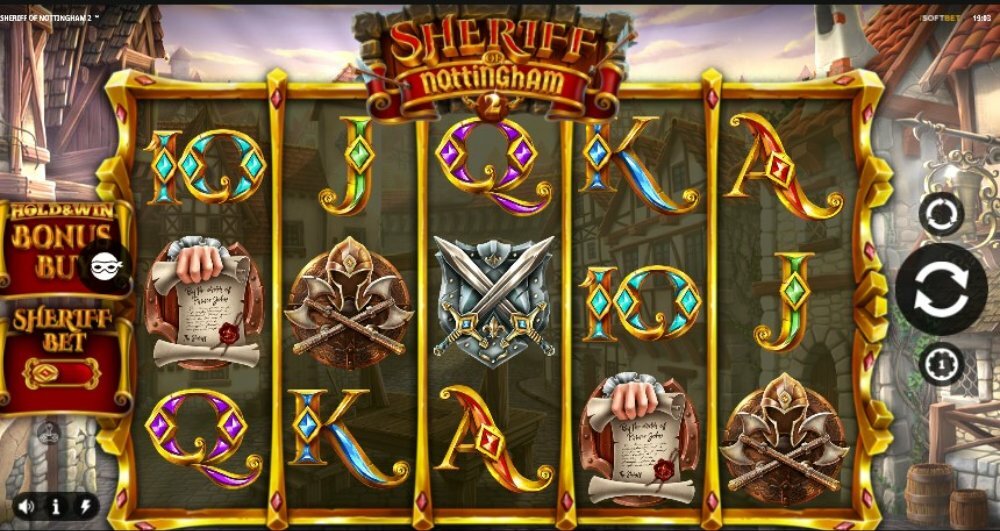 Sheriff of Nottingham 2 has an RTP of 96% and it’s extremely volatile to boot. Players from Europe will find the online slot in the game catalogs of the top online casinos EU.

If you’re looking for a few tips when you play the slots online for real money. Please go through 5 gambling strategies every gambler should know.

Players expecting the usual low-paying royals will win as much as 5x your bet for 5 identical matches. Coming next are Parchment Scrolls, Crossed Axes and Swords, and a Crest symbol paying between 7.5x and 25x the wager.

Of course, the Sheriff takes on the Wild function as he stands in for all symbols except the scatter. It should come as no surprise that our scatter depicts a Bonus Moneybag that activates in-game features. 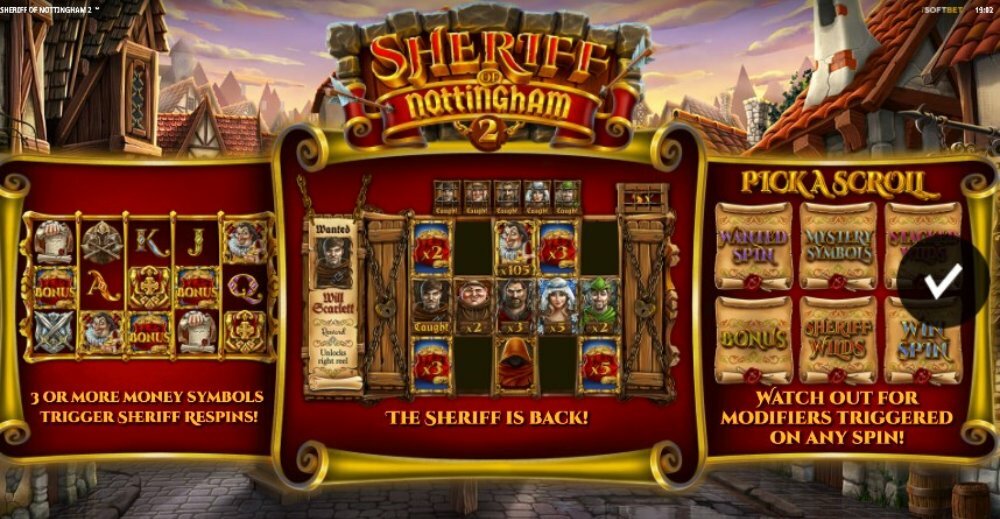 During the base game, this feature activates at random to offer you a pick of three scrolls. Choose wisely between additional wilds, guaranteed prizes, mystery symbols, and stacked Wilds plus multipliers.

Land at least 3 scatter symbols on the reels and receive 3 respins. When you manage to land all 5 sheriff symbols, they multiply all your winnings at the end of the respins 5x.

In this feature, you find only special symbols on the reels, each carrying a modifier for enhanced bonuses. The Robin Hood Persistent Repeater modifier falls as a single or double-sized tile. This means it adds all values in view for each spin if he is collected, even if he gets caught.

When Marid Marian shows up, you win 1x your wager and receive an extra life once the spin counter reaches zero. You also get 1x your bet while doubling all wins in view and enhancing Robin Hood’s modifier when Little John graces the screen.

Friar Tuck gives away 1x the bet and proceeds to open the left reel. On the flip side, the right-side reel opens up, and you receive 1x the bet for a Will Scarlet symbol.

You can activate the Sheriff Respins feature for 75x your bet in countries where it’s allowed. For more action and rewards, pay 150x the wager and play the Super Sheriff Respins. 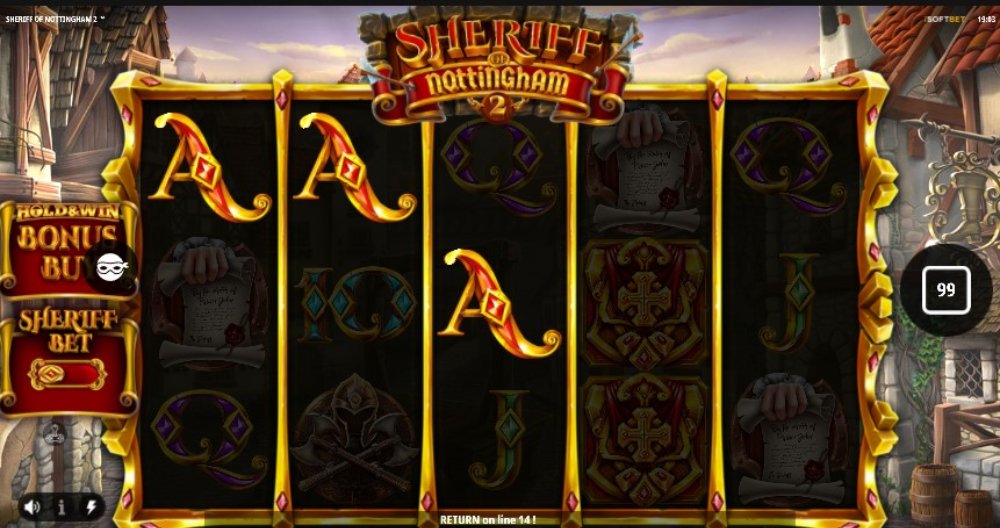 Opt for the on-screen Sheriff Bet for additional opportunities to land modifiers. However, you’ll have to add 25% to your current bet.

During testing, we found that the Robin Hood symbol does not always guarantee a modifier. Don’t expect free spins in this series round, but don’t fret, as the respins feature more than makes up for it.

Sheriff of Nottingham 2 may find many fans with its top win of 7,515x and decent RTP. The high volatility swings back and forth during gameplay but ultimately plays like the good slot it is.

Let’s not overlook the pick me feature as an all-time slot favorite, which offers great prizes. Modifiers and multipliers top up this game for excellent wins in the bonus rounds.

An online slot with a similar theme and mechanics is John Hunter and the Book of Tut Respin. The slot offers plenty of free spins, a 4,000x jackpot, and scatter pays.