NetEnt brings you another cracking 3D slots: Secrets of Atlantis. It features 40 paylines, 5 reels and a top payout of 400 coins. The theme of the game is about the lost city of Atlantis. The game doubles your chances of winning because it pays both ways. You can win a jackpot of up to €/$/£350,000 and the average Return to player (RTP) is 97.07%.

Atlantis  is based on Plato’s infamous myth which captivated audiences for more than 2,500 years. Archaeologists and scientists are still in two minds as to where Atlantis exactly was. Some say it was situated off the coast of Spain, in the Mediterranean or even under Antarctica. The most popular myth is that it’s associated with the Greek island of Santorini formerly known as Thera. The island was destroyed by a massive volcanic eruption approximately 3,600 years ago. To this day Atlantis still remains shrouded in mystery. 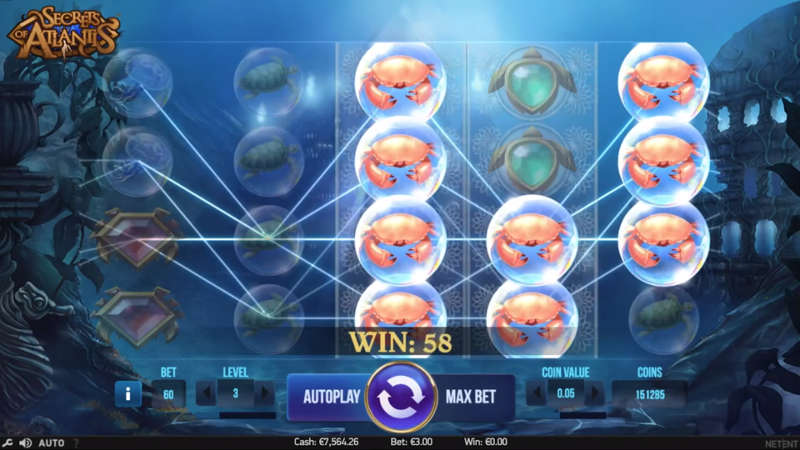 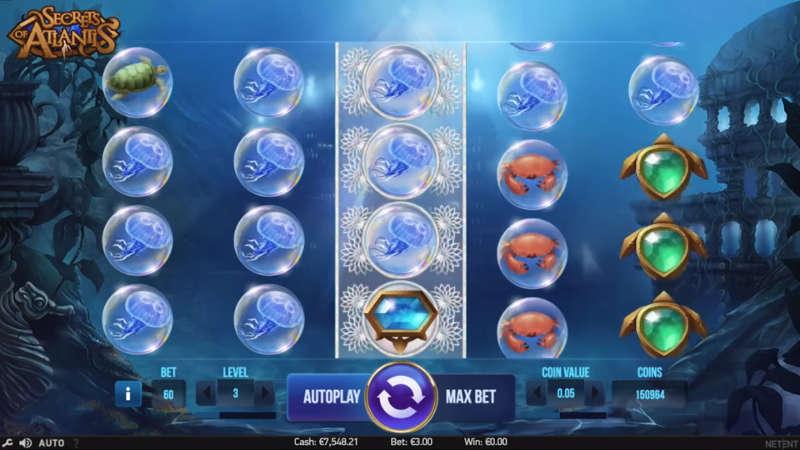 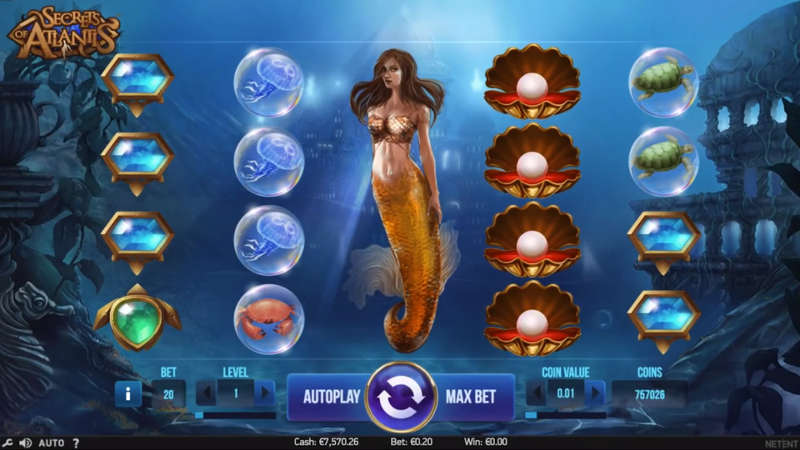 Back to the slots. A mode that stands out during the main game is its wins both ways. The Colossal symbols Re-Spin feature is triggered when the three reels are highlighted. They then transform into one 3×4 block symbol giving you an extra re-spin. Another feature that pops up during the main game is the Nudge Wild. The mermaid will be nudged up and down covering the entire reel. When the Stacked Wild appears during the Colossal Re-spins, it’s nudged to cover the three centre reels.

I played the game in the free mode and noted that it oozes tranquillity. I’m a huge fan of Greek mythology and thoroughly enjoyed playing it. I’ll definitely be back to play a penny or three. Paying icons that appear on the reels are jellyfish, crabs, the mermaid, turtles, clams with oysters in them and various coloured gems. The clam pays out the biggest cash prize during the base game. Five of them at the maximum bet per spin pays out 400 times your stake.

The coin denomination of Secrets of Atlantis is diverse. It’s a medium variance slots that’s suitable to players with different bankrolls. Bets can be made from £$0.20 up to a robust £$200 per spin. Payouts during the base game occur quite often especially if the enigmatic mermaid wild pitches.

Nudge Wild: The wild symbol is the mermaid. If a portion of the Nudge Wild appears, it’s nudged up or down covering the entire reel until the entire reel is wild. If the Colossal Stacked Wild partially appears during a Colossal symbols Re-spins. The three centre reels will then be covered by the Colossal Stacked Wild which is nudged up or down. You’ll win a pretty penny obviously the payouts depends on how many coins you wagered per spin.

NetEnt’s Secrets of Atlantis does away with the usual free spins feature. Instead it presents 2 bonus games which more than makes up for this. The trick of the slots is triggering the Colossal symbols Re-Spin. If you can manage this in conjunction with the Colossal Stacked Wild you’ll win a hefty cash prize. I consider it a medium variance game. On every single spin it pays a top prize of 1,600 times your stake.