Sabres and Swords: Charge Gigablox is a top-notch Yggdrasil slot that runs on the Gigablox mechanic. Yggdrasil joins forces with Dreamtech Gaming for an even more memorable experience. The theme of Swords and Sabres: Gigablox is an interesting one.

Once you open up the slot visuals from the Napoleanic area greets you. You’ll see a bunch of soldiers clad with sabres and muskets charge at each other. Dreamtech Gaming expertly depicts the era with the graphical display.

The reel set depicts the red shirts on one side of the reels and the blue shirts on the other. The blue army is Napoleon’s. The grid configuration is 6 reels, 6 rows and 50 paylines. Moreover, there’s a mishmash of Gigablox 2×2 to 6×6 symbols.

You can saddle up with bets from as little as $0.25 up to $75 per spin. Now, the jackpot you’ll be playing for is 2,880x ($216,000). By no means is it the largest jackpot but it’s the game’s engine that so intrigues us. The hit frequency is 19.60% offering a winner on every 5 spins you make. You can play the slots for real money at the best and most secure online casinos for Canadians. 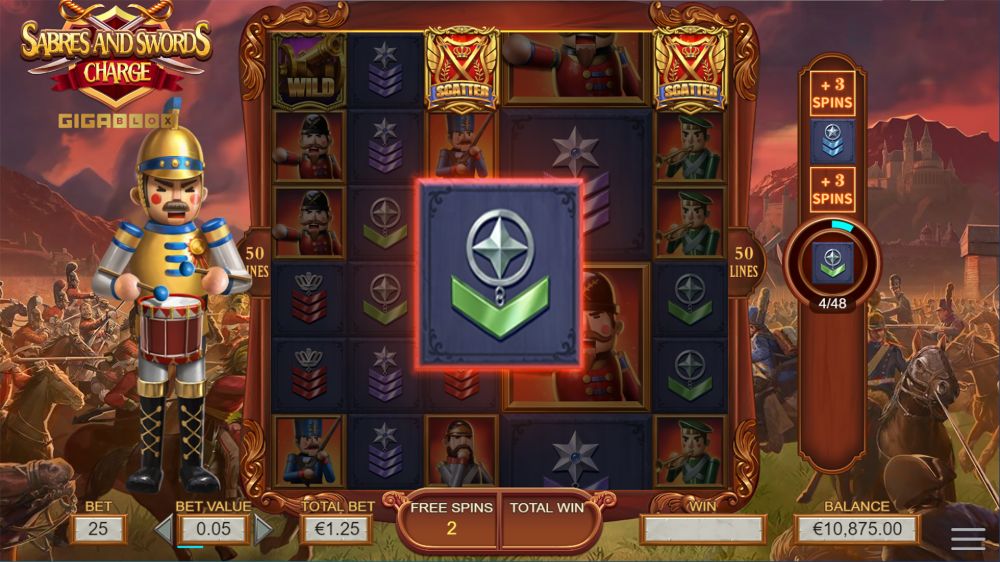 The RTP of Sabres and Swords: Charge Gigablox is 96.11%. We’re happy it’s above the industry’s standard, and there are no RTP ranges. Top marks to Dreamtech Gaming for not muddying the waters.

To receive a winning spin, you need at least 3 matching symbols on the slot’s grid. A battlefield serves as the backdrop for the reels. There are 8 symbols of which four are the soldiers while the other 4 are low-value.

When 6 premium symbols grace the grid with their presence. You’ll pocket a cash prize of 3.2x to 6.4x. The cannons serve as the wilds and 6 of them pay 9.6x. Furthermore, the wild substitute symbols when they form winning combos. US players from America can visit our best legal online casinos in the USA. They offer you exquisite slot machines such as Betsoft’s, Take Olympus.

It’s all about Yggdrasil’s game engine in Swords and Sabres: Gigablox. Your main job is to initiate the ‘Engage the Enemy Free Spins‘ feature. Let’s check out the bonuses.

The interesting bit about the Gigablox engine is that it shuffles the symbols. Thus offering you random symbols starting with 2×2 up to 6×6. Four symbols, therefore, appear as 2×2 block equals. The Gigablox can snag the scatters as well.

Before you can say ‘charge’! You need to initiate the Free Spins feature first. To dance with Napolean you need 5 or more scatters in any position on the grid in the base game. Moreover, you’ll bag an extra free spin for every scatter that appears. For every 3 scatters you collect removes a low-value symbol from the reels. Or, you receive an additional 3 free spins. To cut a long story short, the maximum scatters you can collect are 48.

Our average stake was $1.25 for a total of 50 spins. Which puts our budget in the region of $62.50. We didn’t have enough cash to test the Buy Option. Basically, we played Swords and Sabres: Gigablox on a wing and prayer. We hoped we’d trigger the free spins before we ran out of cash. That’s to say within 50 spins.

Unfortunately, lady luck didn’t smile on the Whizz dudes. The payouts we received in the main game ranged from a few cents to 8x the stake. As you can see nothing to write home to mom about. Having blown $60 fast, the slot offered us little value for cash. Yes, the volatility stung us, in hindsight, we should have played for pennies.

Our reasoning was because it’s a high variance slot we did play at a higher stake. Some you win some you lose. We won’t stick a pin in Swords and Sabres: Gigablox even though we like the mechanic.

If you’re a history buff that likes to play casino games for real money at online casinos. Sabres and Swords: Gigablox has your name on it. Personally, we enjoyed playing the slot because it’s something different. We like the plastic infusion of the visuals and the Gigablox mechanic. Even though the base game will leave you high and dry.

For the most part, the game relies heavily on the Gigablox system. Then there’s the Engage the Enemy Free Spins. Suffice to say, it’s almost par for the course. Only a few symbols appear on the grid reducing your chances of snagging those big wins.

Once you’re in the free spins, the Gigablox shines with up to 6×6 symbols and then there are the multipliers. Catch the top multiplier along with the 6×6 Gigablox; the jackpot of 2,880x is yours! If you haven’t played slots with a Gigablox engine before. You owe it to yourself to drop a few spins on it.

Yggdrasil continues to impress with releases like Vikings Go Bezerk Reloaded. The graphics are off-the-charts. Those Vikings mean and the bonuses enable you to win a cool 25,000x the stake!