Let me start off by saying that Rook’s Revenge is now my favorite Betsoft game. Reason being it reminds me of Gonzo’s Quest. Regrettably this NetEnt game is not available to U.S players. Rooks Revenge comes pretty darn close and highly recommended at that. If you want to get a feel for the game first, I suggest you take it for a spin in the free game mode. The game was released in 2012.

Rooks Revenge is a 5 reel, 25 payline non-progressive 3D slots. I find the game graphics refreshing and the cascading reels or shall I say tumbling blocks offer some dazzling payouts. The only downside to an otherwise entertaining game is that the average payout percentage is 95%. It’s slightly steep, so expect a couple of dry spins in between wins. It offers a max. payout of $12,500 coins. To play this game for free or real money visit one of the casinos above in our where to play section. 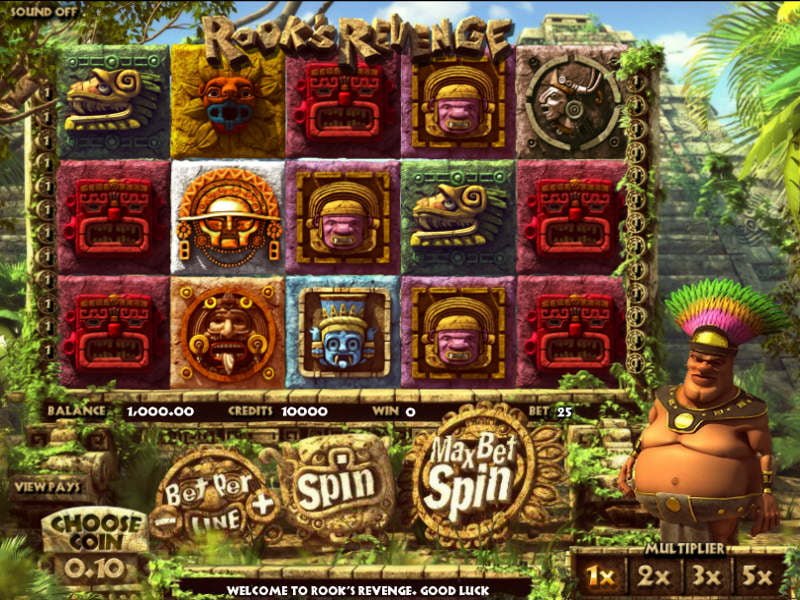 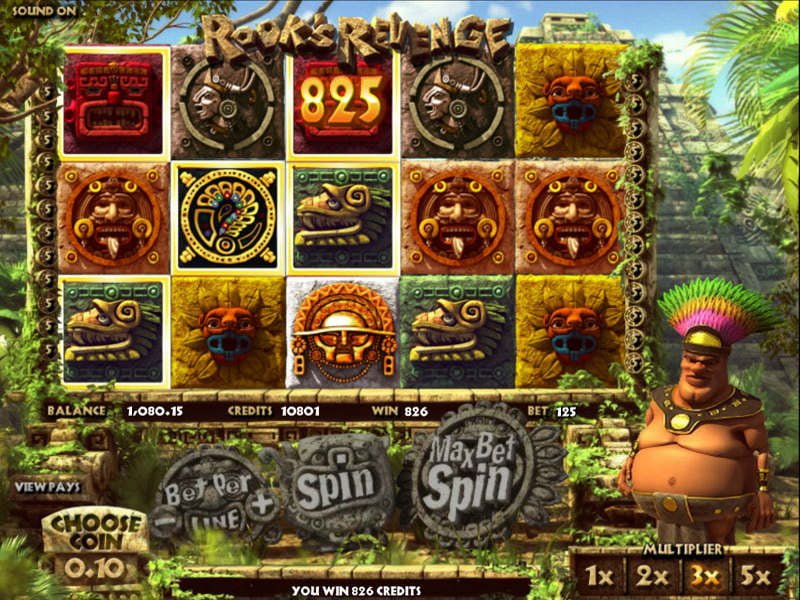 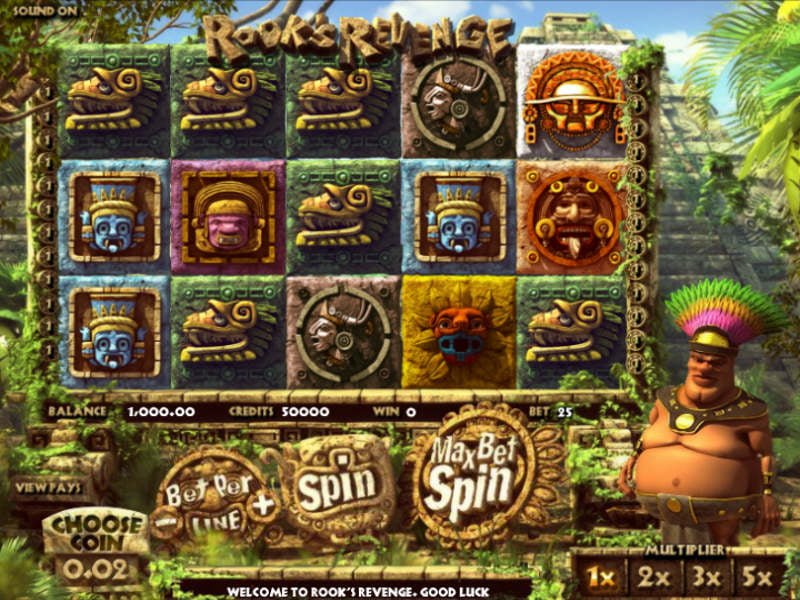 You’re not alone when you play this game. The Aztec chieftain looks rather intimidating but don’t let this put you off. On the contrary he’s quite a pleasant fellow. When you land a win he’ll do a couple of jigs across the screen. I might add for such a big bloke he’s quite light-footed.

Symbols that appear on the reels are the Golden Mask (scatter symbol), various chieftain masks and then there’s the iconic wild symbol. It looks more like a colorful question mark. Rook’s Revenge is suitable to penny-pinchers and high rollers. The coin betting begins at $0.02 up to $1.00. You can wager up to $125 per spin. The biggest jackpot that can be won during the base game is 2,500 coins.

Free Spins: The free spins are triggered when you land 3 or more  Golden Mask symbols. The on-screen multipliers offer additional wins and free spins starting with x1, x2, x3 and x5 up to a whopping x10. You can win as many as 20 free spins with a multiplier of 10x.

Multiplier: When a winning combination appears across the reels the cascading blocks explode. When the blocks explode they are replaced by new ones, as a result additional wins ensue. If you’re lucky enough to land consecutive wins, the on-screen multipliers will increase each payout. For example, on the fourth explosion you can win up to five times the winning bet. Think of them as mini free spins.

Wild Symbol: The wild symbol appears on reels 2, 3 and 4 plus it replaces all the other symbols.

Rooks Revenge is Gonzo’s Quest smaller brother from another mother. Both these 3D slots have striking similarities and laced with some of the best game graphics in the business.

The game plays like a charm on all devices, be it from your desktop or smartphones. Due to the Rooks Revenge’s rich graphics, it might appear slightly ‘jittery’ on certain mobile devices. When this happens, click on the little spanner icon in the bottom left-hand corner of your game screen. Here, you can reduce the graphic settings. Just a pity the average return to the player is below than that of industry standards, but hey no one’s perfect.