If it is not Ancient Egyptian-themed casino games, then it is slot machines based on Meso American civilization/culture. By no means are we complaining, as a matter of fact, we can’t get enough of them. Their themes are captivating, they are armed with striking visuals, their jackpots are huge, they have RTP’s of 96% and above, and they’re kitted out with plenty of in-game bonus rounds.

Exactly the same elements, Net Entertainment’s Rise of Mayans a medium to high variance video slot brings to the table. With 10 paylines, 5 reels and 3 rows it has a respectable jackpot (non-progressive) of 6,000x your stake on a single spin! The visual fidelity of the game is excellent since it’s bursting with a kaleidoscope of colours at the seams. You can also test the mechanics of the slots by playing it with free credits.

The structural characteristics of Rise of Maya contain Free Spins, Second Chance Scatter™, Re-Spins, Bonus Bet: Second Chance Scatter™ and Scatter Nudge features. Does the slots have a sense of urgency? Absolutely. Not only will players be engaged by the features, but they will have fun doing so. Rise of Maya slots can now be played at all our instant withdrawal Android Casinos from €£0.10 to €£150 per spin.

The Mayan motive is strongly represented against the backdrop of a stony temple. Symbols on the reels are the Mayan ceremonial masks, various serpents, deer skulls, low-value cards from 10 to Ace, Wilds and scatters. The most important symbol is the deer, and when 5 of them appear in any position on the reels, you’ll pocket a cash prize of 250x your stake. Winning combinations are created when you line up at least three-of-kind symbols. Rise of Maya has an average return to player percentage (RTP) of 96.12% to 96.42% but improves significantly once a bonus round is triggered. Rise of Maya has a good hit ratio of 23.69%. Simply put, you’ll receive a payout on every 4-7 spins. 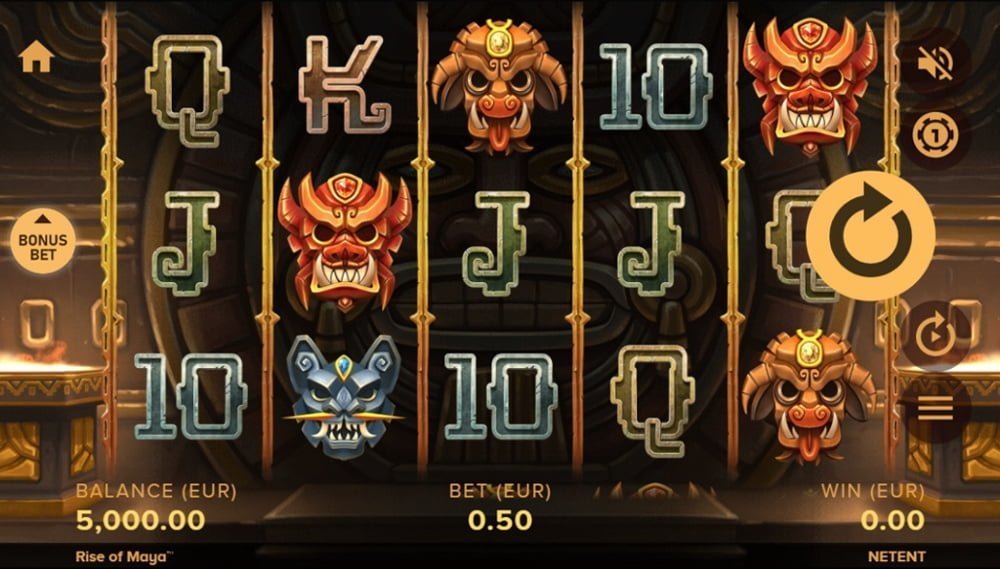 The Scatter Nudge bonus is triggered both during the main game and in the Free Spins mode. Bear in mind that it can only be played during a non-winning spin when scatters and wilds are nudged.

Up to a maximum of 4x Wilds can pitch, which is really not bad, don’t you think? There are the standard wild, the Serpent Stacks and the 2 expanding Serpent Wilds. The latter wilds only appear during the Free Spins on the hot reels by covering an entire reel.

Of the bonus rounds, the Free Spins feature is the most important because the jackpot of 6,000x your stake is won here. Before you can get into the feature, you need 3 or more scatters or wilds which triggers 15 Free Spins. Now, the reels on which the scatters or the wild combinations appeared is known as the ‘Hot Reels’. The Serpent Stacked Wilds spices up things for the big wins. Should another 3 or more scatters re-appear, another 9 free spins are awarded, making it 24 free falls in total.

It’s a bit of tongue-twister, to be honest, and you can only activate it during the base game. The Bonus Bet: Second Chance Scatter & Second Chance Scatter Re-spin increases your odds of triggering the free spins and Hot Reels by allowing you to score extra wilds and scatters. If there are no wilds or scatters, a re-spin is awarded.

NetEnt’s Rise of Maya has plenty of bonus rounds of which the Free Spins is the most lucrative, it pays as much as 6,000x your stake on a single free spin. The in-game bonuses and graphical representation makes it a well-balanced and entertaining slot. Variance wise it leans more towards your high-rollers.

Furthermore, Rise of Maya can be seamlessly accessed by the ‘swipe generation’ which gives it access to a much wider audience. If you enjoy the theme, we highly recommend iSoftBet’s The Golden City.

Is The Slots Groundbreaking?

There is nothing new or out of the ordinary about Rise of Maya. Its theme, visual fidelity and game mechanic are already covered extensively by other software providers. Despite the novel theme, we had fun playing it. Just be careful of the volatility because it chews into your bankroll pretty quickly especially at the highest bet levels.