Adventure/fantasy themed online slots are swank with software houses, mainly because they provoke a sense of escapism from the hustle and bustle of everyday city life. Microgaming’s Relic Seekers, a high variance video slot hits the nail on the head with this release. It is based on three courageous adventurers: Professor Morgan, Nora,and Free Man. Join them on their quest as they seek for lost treasures in the Dragon Tombs.

Relic Seekers has 25 paylines, 5 reels and it pays a top jackpot (non-progressive) of 4,500x your stake. Playable at all our certified, and best Mobile Casinos from a modest £0.25 up to £500 per spin. If we peel back the layers of Relic Seekers, it’s kitted with a Rolling Reels feature that transforms high value symbols into wilds, a Symbol Turns Wild, and a Free Spins bonus with 2x multipliers.

The visual material of Relic Seekers is good which makes the slots even more compelling to play. The symbols that appear on the reels are the 3 adventurers (Free Man, Nora, and Professor Morgan), lantern (wild), and the scatter. The premium symbol is Free Man, 5 of them on the reels offers a payout of 90x your stake. If your average bet is £0.50 (£0.50x£90) you’ll win £45. The RTP or average return to player percentage of Relic Seekers is above 96%. 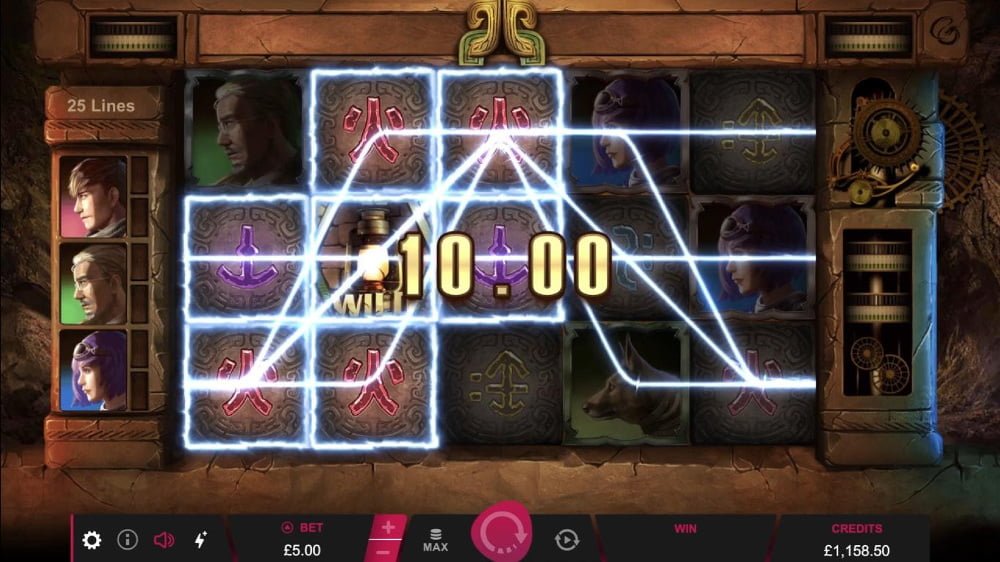 The wild symbol is the lantern, it completes winning combinations when it replaces symbol/s adjacent to it except the scatter.

Ten free spins is triggered when 3, 4 or 5 scatters pitch in the main game regardless of their position on the reels. An extra 10 free spins is awarded when another 3 or more scatters pop, making it 20 free spins in total. The Collect Key feature plays a prominent role in the feature too. For ever 3 keys collected an extra 2 free falls is awarded, and tied into each free spin is a multiplier win of 2x. Plus, the Free Spins benefits from the Symbol Turns Wild and Rolling Reel features which makes it a very lucrative bonus round.

If Microgaming continues to roll out quality slots like Relic Seekers it could end the year on a high. The volatility will shake your pocket, yet a top payout of 4,500x your stake on a single free spin (providing you collect 6 keys and the multiplier is 2x) makes it worth the grind. Even though it’s a great game it didn’t blow our socks off like Lara Croft: Temples and Tombs did. From its animations to its in-game features, RTP that shakes 96.06%, and jackpot of 7,343x your stake; the developer outdid itself in pretty much every way.

Can you give us any slot tip/s that will stand us in good stead?

Because there’s no skill involved when it comes to playing online slots, players often make the mistake by playing reckless. Being the slots enthusiasts that we are, we tell you how to beat a slot machine by playing smart. Remember, play a game that’s in line with your bankroll, take it for a few spins with free credits, and read the Paytable.

Relic Seekers is now live at 24K Casino, the best European and International online casino. Just for signing up you’ll get a starting bonus of 100% up to 300 Euros/Bitcoin, plus a bucket full of free spins followed by a 50% bonus!