One software developer that doesn’t need to prove itself any more is Play N’ Go. Its newest addition to an already impressive slots library is Reactoonz, a high variance 3D slots. This alien themed video slot is played on a 7×7 grid which uses the cascading game engine that allows players consecutive wins on every spin.

Reactoonz a 3D online slots can be played from 20 pence right up to £100 per spin on PC desktops or mobile devices. As you create wins symbols will be collected that can trigger any of the 5 bonus modes. The bonus games are Implosion, Alteration, Demolition, Incision and Gargantoon. In each of the bonus feature wilds are either destroyed or new wilds are added to the reels.

This is not all, 3 random bonus features have been added just to spice things up:

”Reactoons sits on 7×7 reels and not on your proverbial 5×5 reels, in the base game it features cascading wins with a plethora of wilds.”

With each wild symbol transformation win one of five Quantum features can be triggered randomly as you charge up the meters. The action is beefed up with low value symbol destructions, intersecting wilds along with a Gargantoon (loads of wilds) which adds a 1×1, 2×2 and 3×3 wilds. In addition the symbols that transform gives you random wilds and symbols that offer 2x wins with 4 matching symbols.

The top cash prize that can be won on a cascade is a non-progressive jackpot of 4,700x your stake. Symbols that appear on the reels are 4 high-paying aliens, 4 lower-paying ones and the vortex wild. The symbol that pays the top cash prize is the pink alien, 5 of them at the maximum bet pays 750x your line bet. The graphics are cartoonlike and visually sublime. The RTP or average return to player percentage is 95.7%. 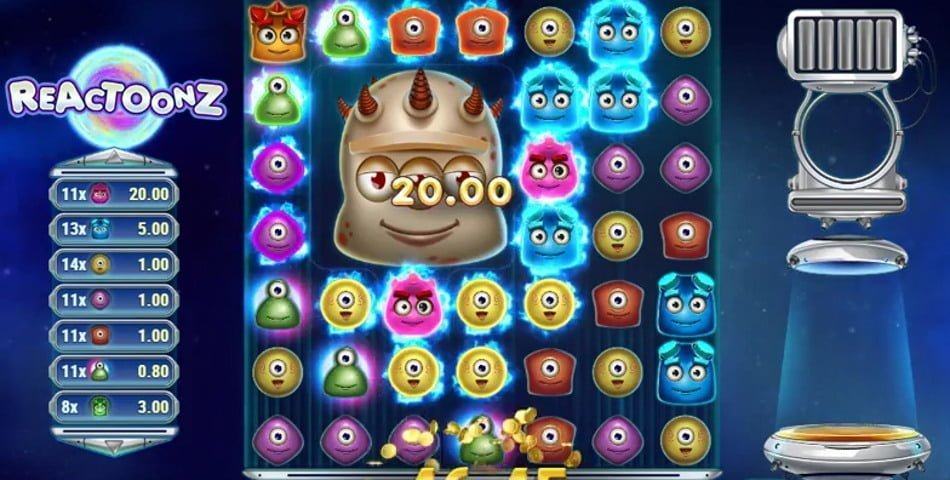 Game play is made more convenient by a Max Bet button, Auto Play, graphics and audio settings. Because Reactoonz is a volatile slots it takes a few spins to unlock its bonus features. To gain the most out of the game it’s best to play it with a bankroll of £200 or more.

Reactoonz employs a cascading feature where symbols drop on a grid of 7×7. Winning combos (horizontally or vertically) can be formed when you hit 5 or more cluster).

Wins occur when the contributing symbols are removed from the reels while being replaced by new symbols. As long as you keep on getting wins the cascades will continue.  For every win the 5 Quantum Leap charge meters increase by 1:

Staring with 3 up to 6 symbols become wilds while adjacent ones are destroyed.

Low value symbols are destroyed and removed from the grid.

A wild is split in the centre which creates 2 diagonal lines that runs through the grid. A random symbol that’s the same will then be selected.

Now, when the 5 charge metters are fully charged, the Gargantoon feature comes into play-a 3×3 wild will be added to the grid. The Gargantoon will be divided into 2×2 wilds. When the next cascade occurs the Gargantoon divides into nine 1×1 wilds.

Should you fail to land a winning spin, 1 random quantum feature is initiated. The features can be changed allowing you to get more winning combinations. 4 to 8 Wilds can be dropped randomly by the Gargantoon feature that’s if you don’t winning a dime. Another feature worth mentioning is the Giantoonz featur, it’s played when a random symbol is marked as a fluctuating symbol which drops 2 wilds.

The Fluctuation feature is triggered when 1 low random value symbol appears in a winning combination, 2 wilds will then appear on the grid.

Reactoonz may come across as a complicated slots but it’s not. It’s a high octane game that’s fun to play albeit high variance, the top cash prize that can be won on a single spin is 4,570x your stake.