Egyptian themed slots have and will always be very popular with players. I guess it’s got to do with the mysticism and allure of ancient Egypt. A period lost in time but the exploits of the pharaohs still echo across the centuries. The game was released in October 2015 and the house edge is 3.8%.

Pyramid Quest For Immortality by NetEnt is not your run-of-the-mill 3D slots. It features 5 reels and an incredible 720 paylines. It’s replete with expanding multipliers, sticky wilds and Avalanche reels that will leave you gasping for air. The max. win is 3.6 million coins. If you want to get a feel for the game first I suggest you give it a shot in the ‘free game’ mode. 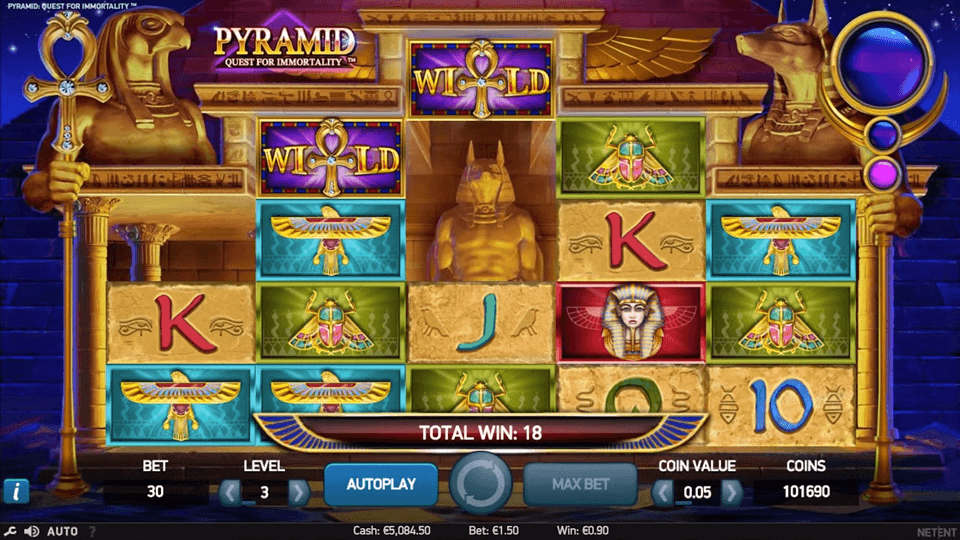 My first impression of Pyramid Quest For Immortality is good. The game’s theme is further augmented by a great audio which reminds me of Loreena Mckennit’s song about Egypt. The reels are pyramid blocks which adds another dimension to the game’s mystique. Symbols that appear across the reels are the ankh (wild), eagles, snakes, queens and pharaohs. Ornately crafted symbols 10 to Ace grace the reels too.

Before I continue, there are no scatters or free spins in this game. It’s the Avalanche feature and the Ankh symbol that’s responsible for all the action. After each spin, winning symbols literally explode and replaced by the ones above. Pretty much the same like the one found in Gonzo’s Quest. They don’t gobble up your credits since they’re free re-spins. The treasures locked within the pyramid are removed by Avalanche Feature.

The slots is suitable to penny pinchers and to high rollers. The coin denomination is $0.01 up to $2. The min/max bet is 0.10 up to 200 coins per spin. Before you play make sure you select the right coin selection that fits your budget.

Wild generation: The Ankh only appears if you manage a win on reels 2, 3 and 4 at the top. I’ve played the game in free mode and I must say I had some spectacular wins. If you trigger the Ankh, 90% of the times it creates additional wins. The Golden Ankh is the wild symbol. When it appears it substitutes all the other symbols within the pyramid and pays out very handsomely.

This is not your proverbial NetEnt 3D slots. It’s a relatively easy slots to play but the symbols across the reels might confuse players. Pyramid Quest For Immortality is a high variance slots. If you’re not cautious with your bankroll it can chew it up in no time. But, it offers incredible wins as well.