There are real money slots online that grab your attention from the first spin; Yggdrasil’s PopRocks is one of them. There’s so much going on beneath its feisty exterior it makes our head spin!

Let’s take it from aside, shall we? First, Yggdrasil teamed up with Avatar UX to design PopRocks, which seems to be the norm in the online slots industry now. Avatar UX is in Hong Kong; it creates Asian themed slots for the European market. Prior to crafting this free online slots review, we never heard of them before. But, what we see so far, we can only shower them with compliments.

PopRocks is in the same league as Rise of the Mountain King. It offers a top cash prize of 72,188x your stake, which expands to an incredible 33,614 ways to win! It’s the first in the PopWins slots series, which unleashes arcane powers with massive winning potential. PopRocks is a fantasy Asian-themed high variance video slot where the World of Warcraft meets Kung Fu.

Play tees off on 5 reels, 3 rows, and 486 ways to win. Once you registered an account at one of our top European online casinos, you can spin the reels from £$.10 to £$30 per spin. We praised Yggdrasil’s Ice and Fire, but PopRocks is a few leagues above it. The only thing that scares us is that it’s so volatile it almost bleeds credibility. Thank heavens for an RTP of 96.8%, Cascades, Progressive Multiplier, Hit Ratio of 22% and Expanding Reels.

The symbol spread out across the reels are cards from 10 to Ace, different coloured gemstones (green, red, blue, and purple), and gems held by dragons (blue, red, purple, and green). Strike five or more of them any position on the reels you’ll pocket 100x your stake. 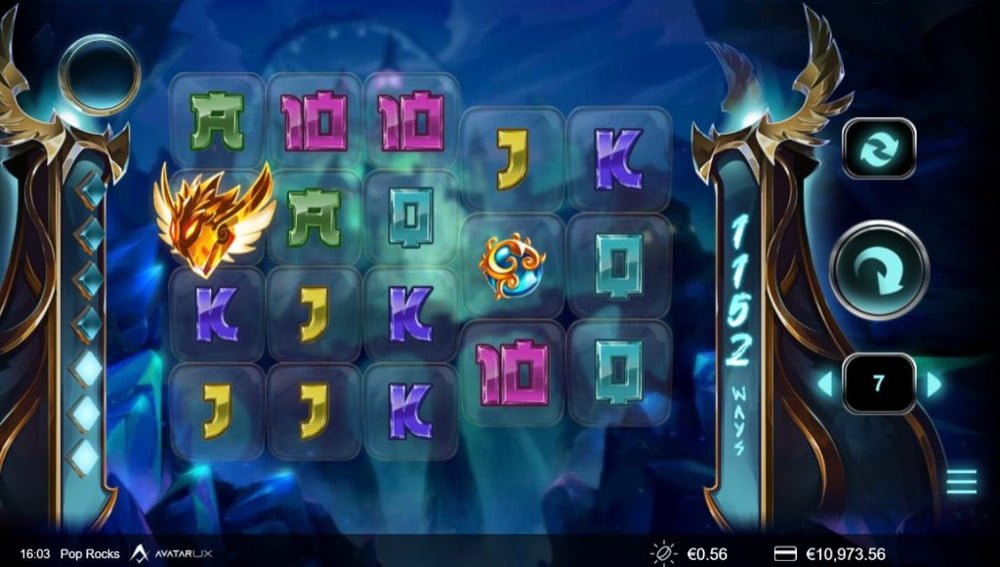 PopRocks plays at 100 miles per hour once its bonus features are activated. You’ll trigger the PopWins feature, but central to it is the Cascading mechanic. During a winning combination, two new symbols replace the current symbols. The maximum symbols that can appear in a Reel Cascade are 7.

You’ll trigger The Bonus Mode feature when there are seven symbols each on both reels. A random wild appears on both reels with a multiplier value of 2x instead of the 1x for every 7th pop. A new symbol appears after each pop.

If we can use an analogy to describe PopRocks, it’s like traffic during the peak hour of the day. If you’re a fan of grid slots, you’ll enjoy it, yet the only downside is that there are no free spins or re-spins, and it’s super volatile. The game relies heavily on its Cascading Wins and its progressive multipliers. Otherwise, PopRocks chugs along at a steady pace. Play can become tedious after a bit of grinding. Yet it’s difficult not to take it for a few spins, especially if it offers a top cash prize of 72,188x your stake on a single spin.