Phoenix Graveyard from Elk Studios is a video slot with up to 1 million ways!

We expected the proverbial phoenix to rise from the ashes with this release, but not so. There is a Phoenix though and it’s one of the game’s wilds.

The theme takes you to a graveyard in Phoenix instead. Talking of graveyards, the theme is as dark as it gets with the grim reaper leading the charge.

On that note, it might be prudent to leave the lights on when you play the slot.

If you like the occasional blockbuster slots, Phoenix Graveyard hits the spot with a 10,000x jackpot.

For what it’s worth the volatility tips Whizz’s slots scale at an 8/10.

Bets per spin start with $0.20 up to $100 at the safest legal online casinos that accept real cash bets. 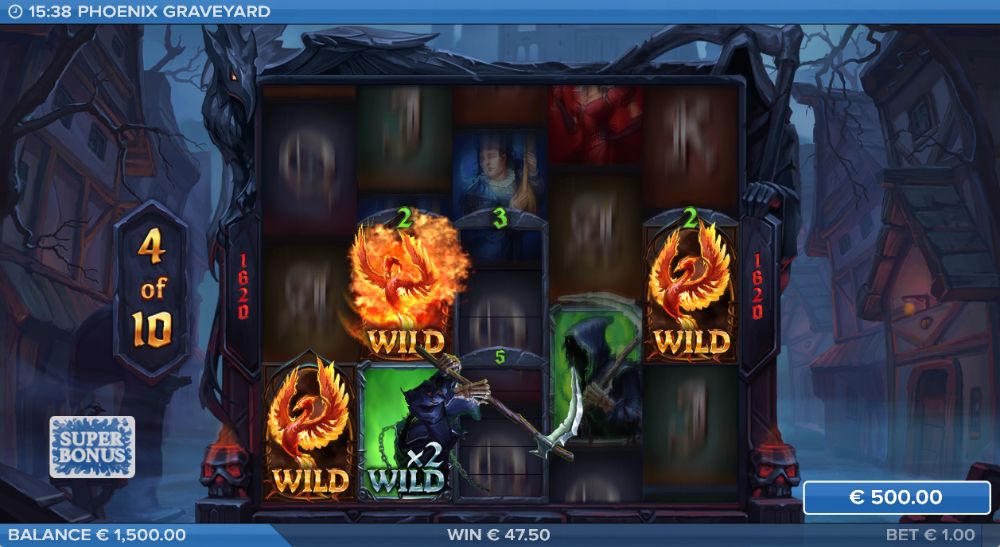 ELK Studios announces the RTP of Phoenix Graveyard at 95% along with a hit frequency of 23%.

You can expect a winner on every 4th spin. It’s your typical high variance slot with infrequent wins.

Aussies can play Big Benji’s Bonanza, the RTP is slightly better at 95.50%.

The pokie now features in the catalogs of the best casinos online for Australians.

A medieval spooky town serves as the backdrop for the reels.

The low-value card symbols are J to A whilst the character pays are the high-value symbols.

The cards pay up to 1.2x your stake for 5. Now, when 5 premiums land on the grid you’ll pocket a cash prize of 5x.

Besides, the symbols don’t pay much but at least it’s better than nothing. 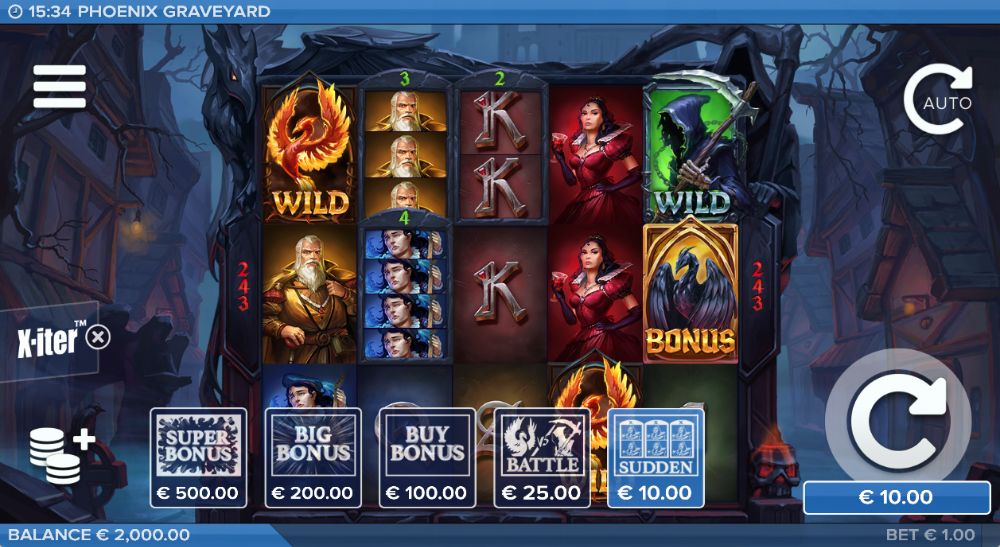 Displaying a number of ways the Tombstone frame can pitch on any random spin.

It’s a Sudden Death feature of sorts because the Tombstone frames pitch on any random position.

The symbol that lands in the Tombstone split in a number of ways. There are up to 10 symbols per tombstone.

Phoenix Graveyard has two wilds namely a Phoenix and the Grim Reaper.

The wilds pop in with a multiplier value of 1x. Moreover, a tombstone splits them, the number of ways then multiplies by the multiplier.

On each respin, the Phoenix wilds stick to the reels. And, during the free spins, they hop from one reel to another.

Suffice it to say, when a Phoenix hops from a tombstone, the multipliers on the tombstone come into full effect.

When the Grip Reaper wilds land on reels 3 and 5 they trigger respins.

Interestingly, the Grim Reaper wilds will attack any Phoenix wild or high-value symbols.

The Grim Reaper also shifts one position to the left on each spin. When the Grim Reaper wilds move from a tombstone they drop a multiplier.

The respins end when Grim Reaper wilds are no longer on the grid. Moreover, the Grim Reapers add a tombstone when they attack a high-value symbol.

But, the Phoenix wild can also jump to another position on the reels leaving a feather wild in its position.

Now, the feather wilds can transform into Phoenix symbols along with a multiplier if it’s in a tombstone.

However, there’s also more to what meets the eye in the free spins. Depending on the number of bonus symbols 10 free spins can have 3 Phoenix wilds.

Besides, when the Phoenix wild triggers bonus symbols they spawn along with multipliers.

The Phoenix wild remains on the reels during the free spins hopping from one reel to the next.

The X-iter mode comes with a price tag, it also offers you 5 ways to play the slot: 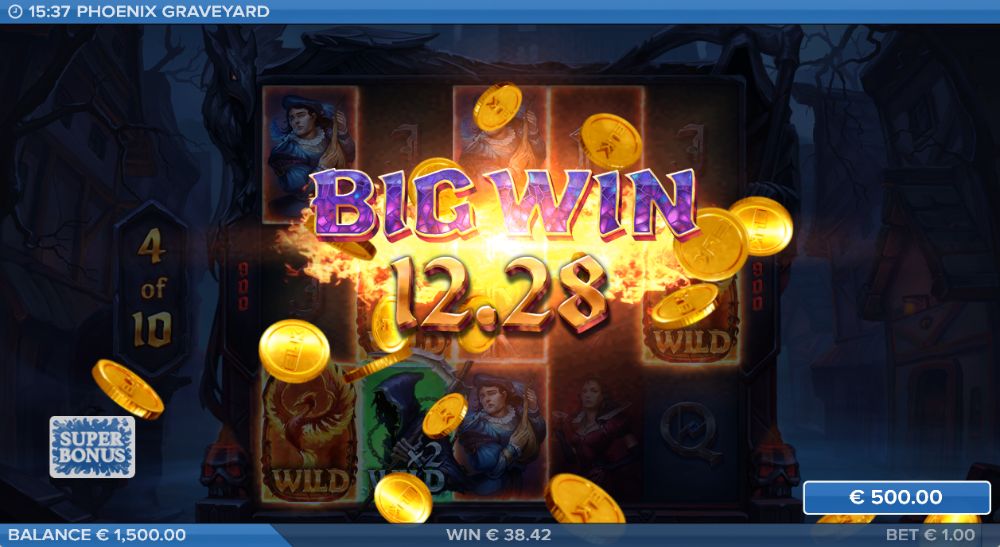 We didn’t go all out with Phoenix Graveyard.

Did we accomplish anything with our 100 spins? Nope, we did not, and we blew it in no time.

Remember, the purpose was not to win money but to test the slots with real cash.

We tried the $500 X-iter option a few times at the same betting range with zero luck either.

Phoenix Graveyard is akin to trench warfare because it’s a battle every step of the way.

It took a few spins before we got the hang of the slot and the wilds are everywhere.

We’re referring to the Phoenix and the Grim Reaper wilds of course. Elk Studios did a good job.

We say so because the wilds stick to the reels in both the repins and free spins feature.

They drop double multipliers and slice symbols as they plod along. Of the two Wilds, the Grim Reaper wilds pack the biggest punch.

Oh, and did we say they jump? We just did. Everything blends nicely into a cohesive whole. The game’s engine also reminds us of Nolimit City’s, Nitropolis.

Take it easy when you play the slot because it can be a graveyard for your bankroll.

Hopefully, your casino budget will rise like the proverbial Phoenix from the ashes with a win of 10,000x.