Despite their simple graphics we’ve become quite the fan of Quickspin’s video slots. It’s newest addition to an already impressive slots library is Northern Sky a high variance slots. It contains 9 paylines, 5 reels, 3 rows and can be played from as little as 10 pence up to £100 per spin on mobile phones and PC desktops.

‘‘Experience the beautiful Northern Lights, breathtaking colours that move across the Arctic Sky.”

Against the backdrop of the reels you’ll see the Northern Lights, bonus mode wise there’s a re-spins feature that keeps on paying as long as you keep on hitting winning combinations and a free spins feature where you can pocket 10 free spins.

The top cash prize that can be won is a non-progressive jackpot of 3,111x your stake  on a single spin and it has a RTP (Average Return to Player Percentage) of 96.57% or a house edge of 3.43%. The audio exudes tranquility and compliments the theme well, just be careful you don’t fall asleep because it’s so soothing. 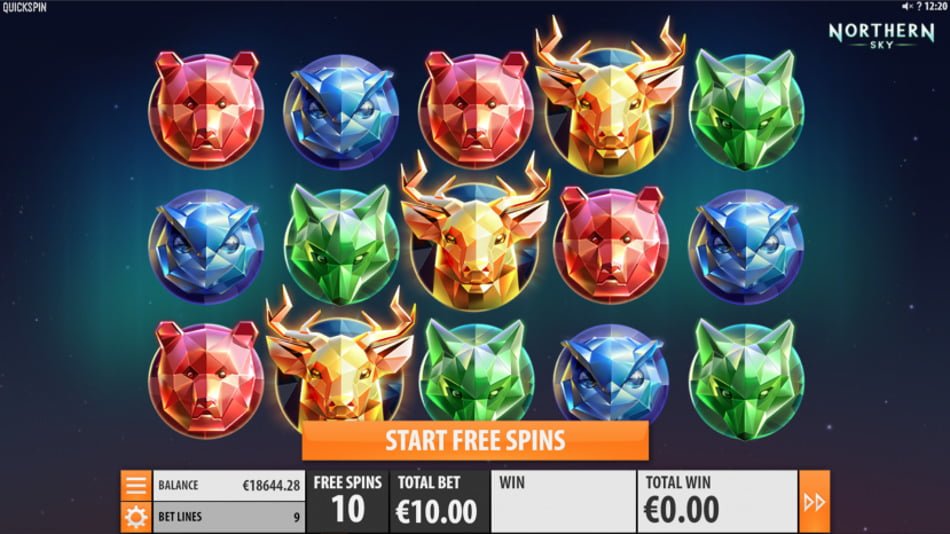 Northern Lights can be played in the free mode with dummy credits of £5,000 plus. There’s an Auto Play feature that spins the reels from 10 times up to 1,000 times for you, it comes in handy if you plan on playing the game for a long session. Because we’re low staked players we played the slots with a bankroll of £30 at an average stake of £0.20 per spin. Payouts were surprisingly good during the main game we had a few wins of around 10x to 15x our stake and during the free spins we won 30x our stake. The potential for some big wins on a small bankroll is really good.

Northern Sky starts by unlocking its riches with a re-spins feature-it’s played when you hit successive wins during the main game. Winning symbols sticky to the reels while the non-winning ones are removed, they’re also replaced by new symbols. The re-spins will keep on coming as long as you keep on hitting those winning spins. 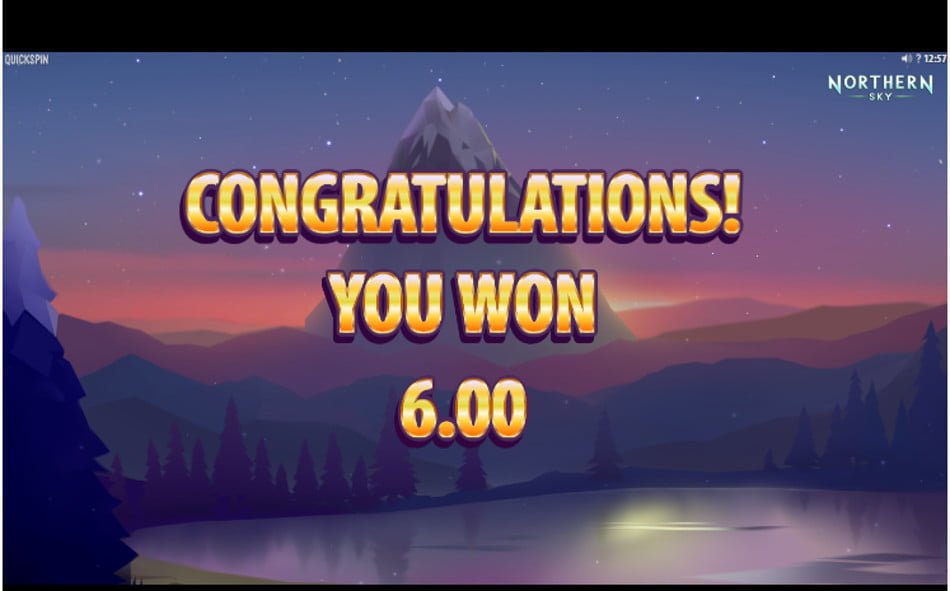 The scatter icon is the mountain bonus symbols, when 3 of them appear during the base game on the reels triggers the free spins feature is triggered, the feature awards 10 free spins. During the free spins all the low value symbols are removed from the reels, the only symbols left are the high value animal symbols-they offer bigger payouts.

Northern Sky is a well crafted slots that does the basics well, the only thing that annoyed us after 30 minutes of play was the audio despite its soothing sound but that’s us. You might like it. It’s high up on the volatility scale so don’t expect payouts on every spin, you’ll get a few dry spins but payouts are generally good.

The free spins is not easily triggered, if you stick around it’s well worth it because you can win as much as 3,111x your stake on a single free spin. The nice thing about the free spins is that low value crystal symbols are removed from the reels which boosts payouts significantly.