Yggdrasil Gaming released another quality slots titled Nirvana. My initial take on the slots was that appeared a bit to cheesy for my liking. Then again I decided not to judge a book by its cover just yet. Nirvana is a heightened state where basic human needs such as desire, fear, suffering and narcissism no longer apply. The person is no longer affected by karma or the cycles of death and rebirth. It’s the final stage of Buddhism.

I’m glad to see that the developers incorporated the usual free spins, wilds and even slotted in 3 distinct bonus features: Wild Reels, Mega Reels and Nudge Reels. Each has its own goddess. What makes this slots even more popular is that it belongs to a tournament network with a combined prize pool of 10,000 Euros.

Nirvana comes with 20 paylines, 5 reels and players can wager up to £$100. The top non-progressive jackpot payout is £10,000. The slots machine is crafted in such a manner that it can be played on Androids and various other smartphones. Desktop users will find that the graphics are colourful and bright. Symbols that appear on the reels are a rabbit with antlers, a dragon that’s dipped in gold, phoenix bird, lotus flowers and a cat eagle.

Whether you play Nirvana video slots in portrait or landscape mode on your iOS or iPhone, you’ll find a beautiful mythical land with mythical creatures. The average payout percentage is 96.4%. I just like to point out that the slots is not as lively as Cyrus The Virus. Instead it creates an ambience of peace and tranquility. 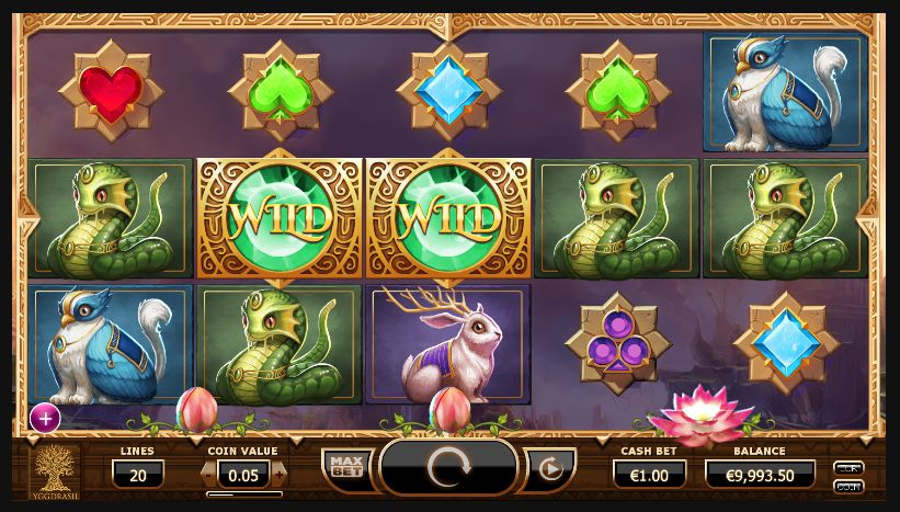 In terms of bonus games there’s a lot to shoot for. Let me start with the wild icon first. The green gemstone is the wild. When it appears in a winning combination it substitutes all the other icons except the scatters. The scatter symbol is the pink lotus flower. When three of more of them appear on the reels the free spins mode is unlocked. The free spins are awarded like this:

There are three additional bonus games, each triggered when 3 or more free spins icons pop up on the reels: The Wild Seed, Mega Reels and Nudge Reels. You must choose one. Each goddess offers its own rewards and payouts. If you’re looking for a good result try and re-trigger the free spins.

Nirvana slots gives you the chance to pick a goddess. Basically you can add another one to the one you’ve already picked. The counter will then be reset to ten free games. Long story short, this is a high paying feature since they offer extra wilds, linked reels and an auto-nudge feature.

What more can I say about Yggdrasil’s Nirvana slots that hasn’t been covered by other reviewers already. Aside from the fact that it offers seamless game play, first-rate graphics and stocked with bonus features that pays well. Due to the amount of bonus games offered the variance errs on the high side. Another top-notch feature I like is that the free spins can be re-triggered. If you’re looking for a heightened state of ecstasy this is your game.