There are real money slots that made us sweat from the very first spin. Just because they are so good we don’t mind. It’s their clever animation that dazzles us with their artistic and cutting-edge technology. Yggdrasil’s latest creation titled Multifly!, goes above and beyond its jungle theme to bring its characters, and especially their antics across the reels to eye-popping life. It is consistent, colourful, and jam-packed with all the mechanics we love in a video slot. So, when you see a bunch of lizards on the reels, don’t fret – just play! You can spin the reels from £$0.10 to £$75 at our fully licensed Android Casinos.

Multifly’s! volatility is sharp, it has a Free Spins feature with Dropdown Wins, Wilds and Reel Multipliers. When they act as a collective they go nuts! So much so that the top cash prize (non-progressive jackpot) is 10,000x your stake! You’ll see chameleons with colour-changing abilities that pile on the multipliers. With its sheer graphical power, Yggdrasil’s Multifly! is destined to be a classic. The sound effects are so good you’ll feel the jungle theme right down to your toes.

In terms of its reel structure, Multifly! has 5 reels, 3 rows and 243 ways to win. You’ll score a payout every time 3, or more matching symbols pitch. The math model is as fickle as a cat on a hot tin roof thanks to its Cascade engine. For a high variance NetEnt slots Multifly! has a respectable RTP of 96.3% and a not so cool hit ratio of 17%. Divided into low and high value, the symbols on the reels out-Mario Mario. You’ll see cards from 9 to Ace, a parrot, toucan and frog. When they form winning combos they trigger the Reel Multiplier which we’ll get to in a bit. The top symbol is the parrot, 5 of a kind pays 4x your stake. Keep your eye on the Multifly! when a bunch of them appear the payout can be spectacular! 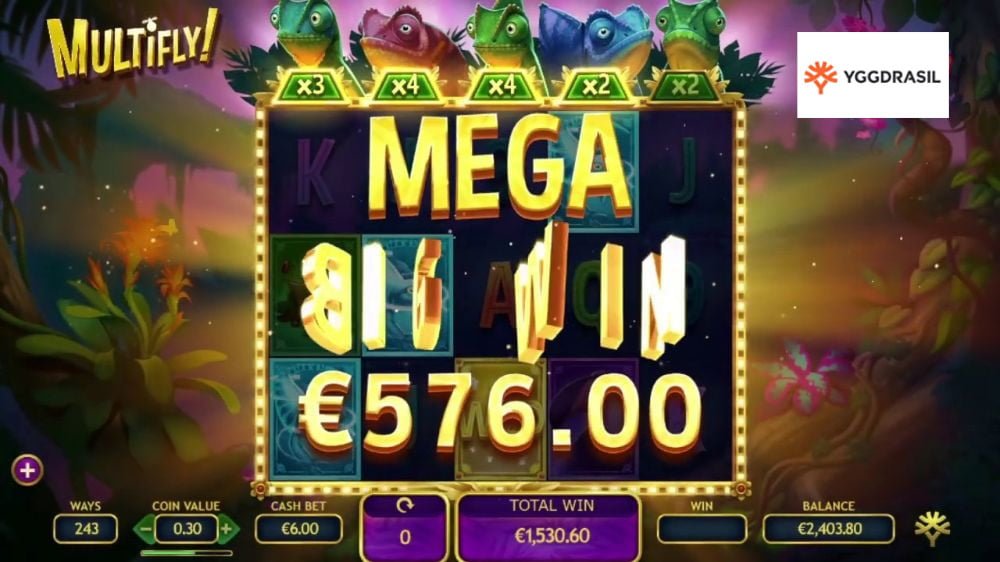 It’s not only the multipliers that shine, but the Dropdown feature too. The Cascading mechanic removes winning symbols from the reels while new ones drop in from the top. As a result you can get a chain reaction of wins. A wild symbol is added to the reels as well.  The Dropdown features ends when winning combinations no longer occur.

You’ll trigger the Reel Multiplier feature when a Wild pops up, or when it’s added through the Dropdown feature. Each reel has its own multiplier. If a wild lands on it, it increases the multiplier value by 1x. On every winning combination the multiplier increase until they reach an earth-shattering crescendo!

Yggdrasil’s Multifly! is as gorgeous today as it will be tomorrow, and it goes from 0-100 km’s an hour in less than 2 seconds. Yeah, its volatility is that crazy (9/10)! The multipliers, wilds, along with the Dropdown feature holds the key to winning the jackpot of £$750,000. Because it’s so volatile payouts can swing both ways. Unlike in the free spins, the multipliers don’t reset in the main game. As a result play in the base game becomes repetitive after a while. On the whole it’s an entertaining romp that’s bursting with colour as well as character.

Where can I play Multifly! slot?

You can play Multifly! slot at any online casino that offers Yggdrasil games.

Do need a big bankroll?

No you don’t. The minimum bet starts with £$0.10 to £$75 per spin. If you’re chasing the big wins we suggest an average bet of £$6 per spin. At this betting range the volatility is not that brutal and you can win up to 350x your bet in the Free Spins.