With 76 paylines, 5 reels, Motörhead non-progressive jackpot video slots is the third installment in NetEnt’s Rock Series. The game can be played on Androids, iPhones, iPads and tablets in the free mode or for real cash. A feature that distinguishes it from the pack is that it incorporates 3 bonus features. The first is the Mystery Reel followed by the Bomber feature and then the Free Spins Mode with multiplier wins.

Just like its predecessors (Jimi Hendrix and Guns N’ Roses) the 3D slots has a rock and roll theme to it. As you spin the reels you’ll see members of the 1975 English band like Ian Fraser or ‘ Lemmy Kilmister’ as he’s known by fans and various other members of the heavy metal group. With more than 30 million albums sold worldwide spanning a period of 40 years, Motörhead attained cult status. The game offers a return to player payout percentage or RTP of 96.98% to the player or a house edge of 3.02%. 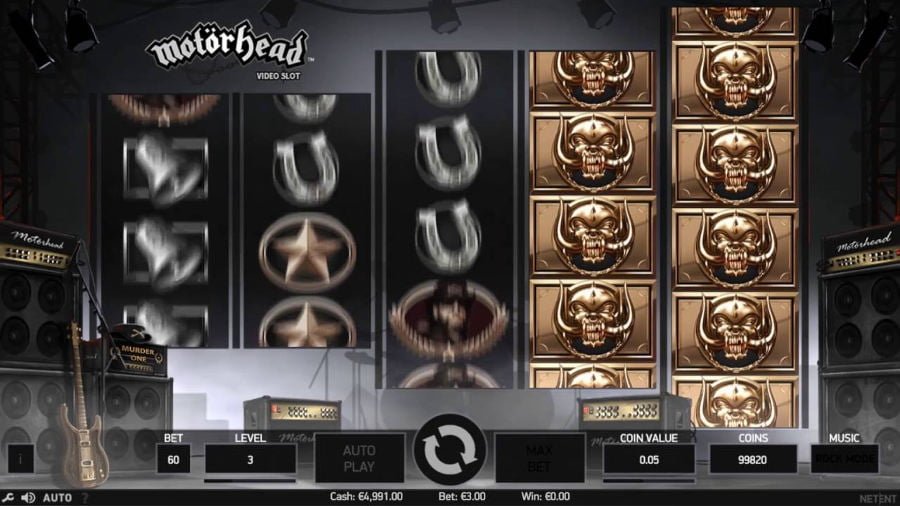 The theme of the game is set on a live stage replete with amplifiers, speakers, the works if you will. An innovative streak that NetEnt threw in is the ‘rock mode’, when in this mode it automatically cranks up the volume especially when the band’s hit song ‘Ace of Spades’ is playing. The wild symbol is the Ace of Spades, to form a winning combination it replaces all the other symbols except the scatter.

The coin range allows you to wager from as little as £$0.20 up to a high roller’s delight of £$200 per spin. An Auto Play feature along with customization options allows you to fine tune the game that suits your style of play best. The game starts with level 1 to 10, the higher the level the more coins you’ll wager per spin.

As mentioned previously there are three distinct bonus features which boosts wins during the main and free spins mode.

During the base game and free spins mode at least one or more reels will be turned in Mystery Reels that consist of stacked reels laced with mystery symbols. Once the reels stopped spinning and if there is a mystery symbol on any of the reels it turns into a random symbol giving you the chance to win something substantial.

The free spins mode is activated during the base game when 3 scatter icons appear any where on the third, fourth or fifth reels. Up to 10 free spins are awarded along with Mystery symbols that result in bigger cash prizes. Whilst the free spins round is active additional free spins can be won. A randomly selected wild does pop up from time to time during the free spins which boosts wins significantly. Free spins will be added to any line bet wins too.

This is the last of the bonus features and triggered before a spin during the main game. A couple of bombs will appear on the reels creating at least 10 overlay mystery symbols. Each bomb displays a cluster of mystery icons, as many as 5 bombs with 15 overlay symbols can appear. With the mystery overlay symbol in position the reels will spin and then randomly selects a Mystery Reel feature.

Motörhead is the type of NetEnt game where players can hone their skills on since it’s quite entertaining to boot. My take on the slots is that it’s a medium variance game where the biggest wins occur during the free spins thanks in part to the wild which can be turned into a mystery symbol. Payout wise the slots is great too since you can win as much as 570 times your stake. Watch out for the crowd pleaser bonus game, it allows you to pick a feature that will land you additional coins in your pocket.