Moby Dick is a classic tale by American writer Herman Melville that’s been the bed time story of tens of thousands of people over the years. The book was published in 1851 during the period of the American Renaissance.

The sailor Ishmael tells the story of Captain Ahab’s revenge on Moby Dick. During Ahab’s previous whaling voyage the white whale bit off his leg at the knee. You can find out more about the tale on this page: (https://en.wikipedia.org/wiki/Moby-Dick)

With Microgaming’s (Rabcat) next installment: Moby Dick slots, players can sharpen their harpoons and brave the high seas in search of this epic whale. The game has 25 paylines, 5 reels and it pays a non-progressive jackpot of 200 coins.

” Moby Dick slots is a tad easier to digest than the book. With a decadent free spins feature, classy looks, players can join Captain Ahab and set sail on the hunt for one heck of a bumper catch!”

The tale of Moby Dick has become a household name over the years, we might add often told with relish. Moby Dick the slots version does the tale justice; visually it’s sharp, easy on the eye and decked out with top-draw game mechanics.

It’s anchors ahoy from 25 pence up to £50 per spin, the slots can be played on mobile phones and PC desktops in the free mode too. Players who play the game from their mobile devices must tune on their Wi-Fi, normal data will be chewed up in no time because it contains a slew of visual animations.

The online slots is set against the backdrop of an ocean, you’ll also see Captain Ahab’s ship the Pequod along the side of the reels. Symbols on the reels are cards from 10 to Ace, ship’s wheel (wild), anchor, Captain Ahab, Moby Dick and a tankard of ale. The symbol that offers the top award is Moby Dick, 5 of them across the reels pays 200x your line bet.

Moby Dick slots offers an average return to player payout percentage (RTP) of 96.3% to the player. Wins during the main are good thanks to it ‘Win Freezing’ feature that’s triggered during a winning combination, a re-spin is given when a combination of symbols are locked in place. Moby Dick comes with two bonus features, a free spins mode that awards up to 20 free spins and Win Freezing feature. This slot can be played at all Microgaming Casinos. 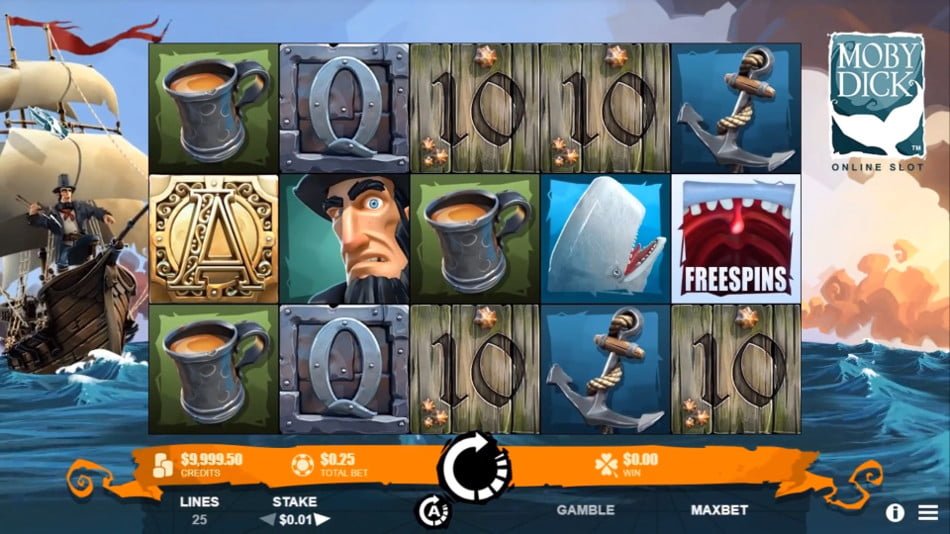 The total amount of coins that can be wager is 25 or £50. The game play is easy thanks to a bunch of customization buttons such as Max Bet, audio, graphics settings and Auto Play. The latter feature spins the reels for you automatically up to 1000x times.

The wild symbol is the ship’s wheel, winning combinations are completed by it when it replaces symbols adjacent to it bar the scatter.

In our opening paragraph we’ve touched upon this feature. During the base game the feature is played every time a winning combo is hit-symbols are locked in positions awarding a re-spin.

The free spins bonus mode is played when 4 or more scatters (whales mouth) appear on a single spin. Hit 4, 5, or even 6 of them you’ll pocket 10, 12 or 15 free spins. However, there’s another slight twist to this tale and a nice one at that.

Moby Dick slots will entertain you with its captivating artwork and its enticing free games that can be re-triggered (up to 40 free spins can be won).

In the main game the ‘Win Freezing’ feature keeps the bankroll ticking over, hopefully it gives you enough cash in pocket to trigger the free spins-hit a cluster of high value symbols and you’ll be grinning from ear to ear.