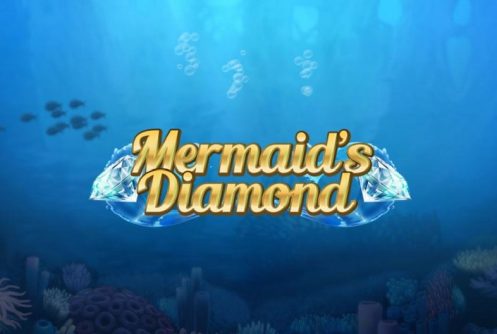 Mermaid’s Diamond is new slot available to play at Play N’ Go Casinos it features 720 ways to win, 5 reels  ans is a medium variance video slot that features a free spins round where 25 are awarded but an unlimited amount can be won too.

The game is based on Greek mythology. Bets can be made from 25 pence per spin while during the main game the ‘Trident Wilds’ are prominent throughout. Mermaid’s Diamond pays a top non-progressive jackpot of 7,200 coins (5,000x your stake).

When 5 diamond symbols appear not only will you receive a reel that’s fully wild but a re-spin will be award as well. The game is playable on mobile phones (iPads, iPhones, tablets, Androids) or PC desktops. Look out for the free spins feature, expanding wilds and the ‘Divine Intervention’ which is played when Poseidon pitches.

Another interesting aspect about the slots is that it pays from left to right and vice versa. You’ll see the ocean against the backdrop of the reels with symbols such as Trident wilds, diamonds, mermaid, 4 underwater creatures, Poseidon and treasure chests. The symbol that pays the top cash prize is the diamond, when 5 of them appear at the maximum bet per spin you’ll win 10x your line bet.

The audio of the game has an orchestral feel to it while the visuals are crisp and colourful. Mermaid’s Diamond has an average return to player percentage (RTP) in the vicinity of 96%. 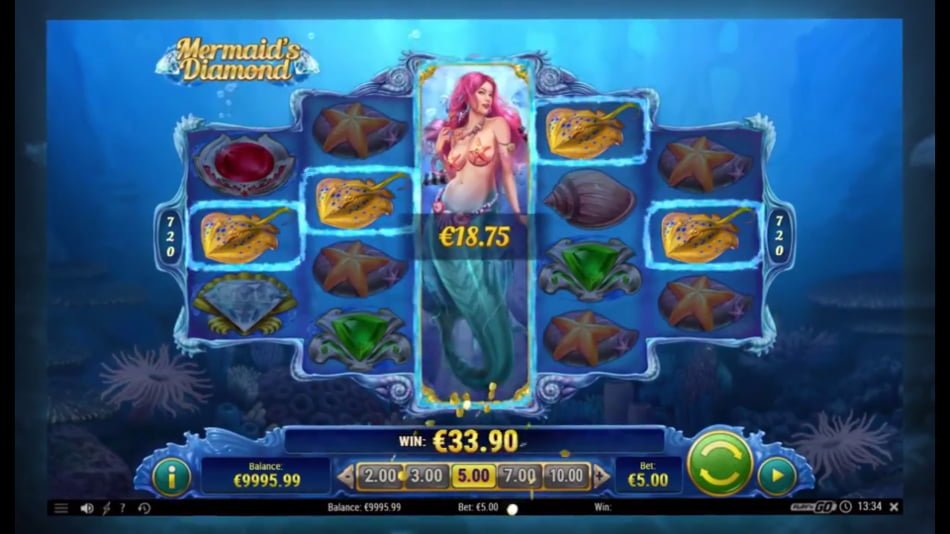 The maximum wager that per spin is £100, because it’s a medium variance slots it’s suitable to medium and high staked players. In terms of game settings there are different coin bet options, an Auto Play feature, Max Bet button and audio. If you plan on playing the game for a long session the Auto Plat feature spins the reels up to 1,000 times automatically for you. Just make sure that you always play the game within the ambit of your bankroll and don’t chase your losses.

The pretty mermaid is the wild, it completes a winning combination when other symbols are adjacent to it except the scatter. It’s not your run-of-the-mill wild, it’s also responsible for triggering the Trident Wilds feature. In other words when additional wilds are added to reels 1 and 2.

When 4 scatters pitch on a non-winning spin the ‘Divine Intervention’ feature is initiated. Once it’s triggered a 5th scatter pitches which triggers the free spins. Another way in which the the free spins can be triggered is when 5 treasure chests appear any position across the reels.

Keep an eye out for the sparkling diamond symbol, it really boosts line wins. If you’re fortunate enough to collect 5 diamonds the Trident Wilds feature is triggered, 1 reel becomes laced with wilds. The free spins mode ends when 4 diamonds appear.

Mermaid’s Diamond has all the strappings of an engaging slots, it’s of medium variance that can pay up to 5,000x your stake. The free spins feature receives a nice shot in the arm thanks to those ‘Wild Reels’-if you hit a couple of them wins can be epic. 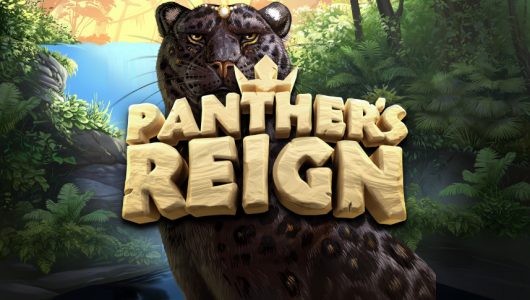 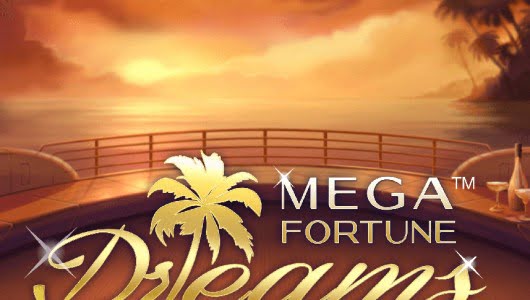