If we had one Bitcoin for every Merlin-themed video slot released over the past few months, we’d be rich now; especially now that the cryptocurrency is on the up again. Be that as it may, NextGen Gaming’s Merlin’s Money Burst is a magical themed high variance 3D slots that is based on the eccentric Wizard, Merlin. Rise of Merlin has a similar structure, and with just as much bite.

Merlin’s Money Burst has 60 paylines, 5 reels and now playable at our instant cash-out Norwegian mobile casinos from ‎€0.30 to ‎€75 per spin. The slots is literally bursting with innovative streaks and in-game bonus rounds. It offers a magical jackpot (non-progressive) of 37,500x (‎€2,812,500) your stake, Free Spins, sticky symbols, and Wild Multipliers.

The 3D slots might be a tad labyrinthine to newcomers, but high rollers will love it. The symbols and the game’s central character (Merlin) are cartoon-like in their presentation. If you fire up the game for the first time, Merlin pops up, greets you and vanishes from your screen again. NextGen decided to go with something different, so much so that even the reels have an unusual structure (2, 2, 4, 4, and 4 symbols).

Against the backdrop of the reel set is an enchanted forest. Symbols on them are Merlin (Wild), cards from 10 to Ace (low value), containers of potions, spell books, bags of money, hourglasses, and the scatter. The symbol that will pay the top cash prize is Merlin, and 5 of them at any position on the reels pays 83.33x your stake. The ‘SuperBet’ feature is another top-notch addition which we’ll get to in a bit.

Merlin’s Money Burst slots carries a RTP or average return to player percentage of 96.75% (house edge of 3.25%). However, if the SuperBet feature is not deployed during the game, the RTP is around 95.50%. 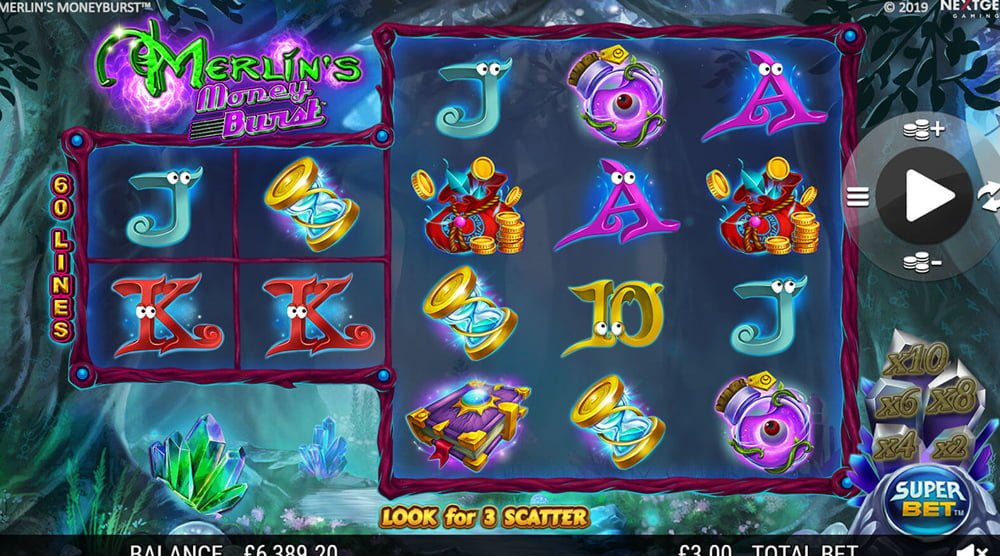 Merlin’s Money Burst has three in-game bonus rounds starting with the Merlin’s Held Re-Spins, Wild and up to a Free Spins features.

Ten wild spins are awarded when matching symbols appear on reels 1 and 2 (which then triggers the feature); as well as 3 scatters on reels 3, 4 and 5. The symbols that appeared on reels 1 and 2 are transformed into wilds while Merlin adds more wilds every time he appears.

The feature can be re-triggered should the symbols on reels 1 and 2 become wild. When Merlin pops up, extra wilds are added; and then a maximum of 20 free spins can be gained during the feature. This is also the most lucrative bonus round.

When the same matching symbols appear on both the 1st and 2nd reels respectively, the Merlin’s Held Re-Spins is triggered. The first two reels are bolted in position rewarding you with 5 re-spins. Merlin is quite a busy figure in this round because he can change the symbols that appear on the other 3 reels into wilds as well. This can bring on the big wins. An extra 5 re-spins are added to your current re-spin tally when another 3 scatters appear.

To trigger this feature, 3, 4 or 5 scatters must appear simultaneously and 10 free spins are awarded. Merlin pops up with his wand transforming all the symbols on reels 3, 4 and 5 into wilds. An extra 10 free falls can be gained when another 3 or more scatters show up. The Free Spins also benefits from the Merlin’s Held Re-spins feature, and aside from the free spins, re-spins spices up play even more.

NextGen’s Merlin’s Money Burst is one of the best of the Merlin-themed video slots. It’s an ultra-high variance slot machine that benefits from a SuperBet feature, a massive jackpot of 37,500x your stake with a 10x multiplier and 3 bonus rounds of which the Wild Spins hits the spot. We give the game a firm nod due to its ensemble of bonus rounds, great jackpot (albeit not easy to hit the big one), and beautiful graphics.

How is the SuperBet feature activated?

When you click on the SuperBet feature, you are given a choice between varying multipliers of 2x, 4x, 6x, 8x, or 10x. The higher the multiplier, the more volatile the slots become, but the theoretical return increases too.

Yes. If you have a bankroll of at least £500, the recommended average bet per spin should be at least £10 with the SuperBet feature set at a 10x multiplier. Rewards tend to be good, but if you hit a big win, cash out and run. Reason being, after a big win (£500 or more) the volatility shoots through the roof, and the slots just clams up.