Megaways Jack, nothing excites us more than a tried and test theme such as Jack and The Beanstalk. Yes, we do agree that real money online slots developers have beaten the theme to bits. But it doesn’t mean that they should stop any time soon. Especially if the release looks as good as Megaways Jack! Cashwise, Megaways Jack offers a non-progressive jackpot of up to 25,000x your stake. Which makes it the perfect slots if you’re chasing the big wins. 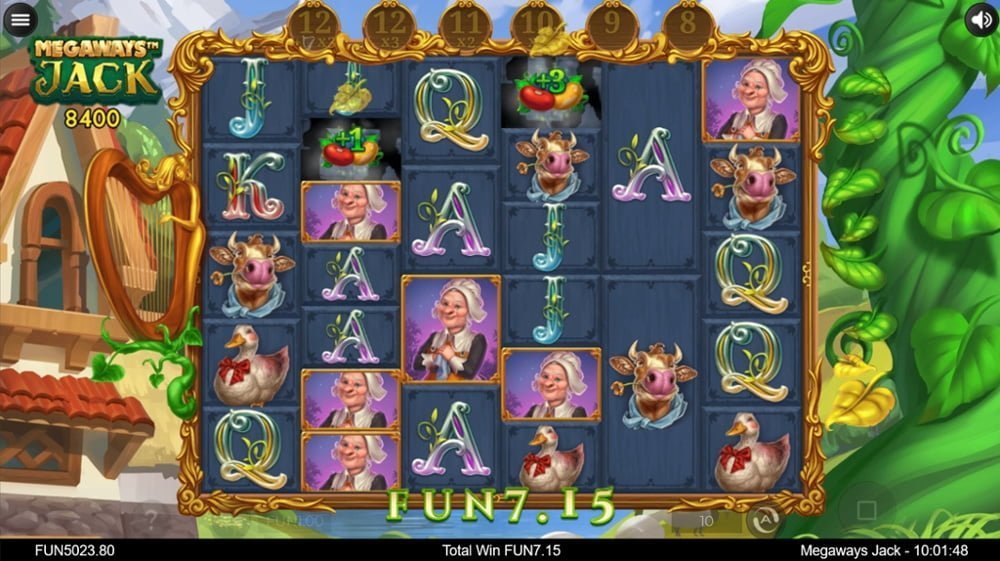 Everybody knows the famous fairytale of Jack and the Beanstalk, and what better studio to bring it to life on the reels than Iron Dog Studio. Remember the name Iron Dog Studio, because you’re going to see plenty of slot reviews from them here. The visual fidelity in online slot machines is entering a new era. So much so they’re reaching a point where the creative ambitions are explosive.  Back to the task at hand. You need 3 or more symbols of the same kind to score a winning combination. Did we mention that the slot machine has a Cascading System? Well, we sure did. You can reap a whirlwind of successive wins on the same spin once the Cascading Mechanic kicks in. Winnings symbols explode and removed from the reels while new symbols drop in from above.

Lately, we can’t seem to get enough of the Megaways system and it’s catching on like wildfire now. Majestic Megaways from iSoftBet is another heavyweight, make sure you don’t miss it! The graphics in Megaways Jack are cartoonlike, consistent and jam-packed with colourful detail. Iron Dog Studio went beyond the call of duty to bring the symbols on the reels to eye-popping life. You can play the slots for real money from £$0.20 to £$20 per spin at our best Neteller casinos. 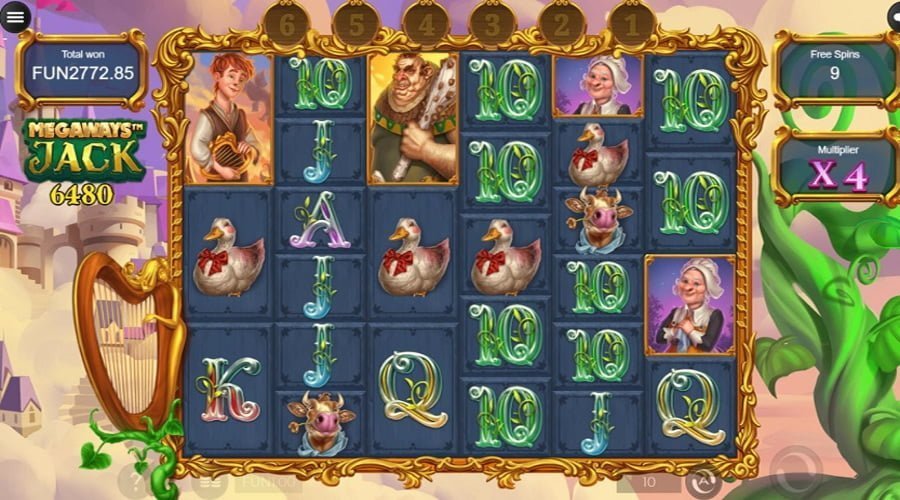 Megaways Jack has an RTP or theoretical return to player percentage of 96%. We’re glad to see that Iron Dog Studio opted for a well-balanced slot, and it’s not out to rip casino gamblers off. Jack’s beanstalk and house serve as the backdrop for the reel set. Symbols on the reels are Jack, the giant, cow, cards from 10 to Ace, the goose that lays the golden eggs, Jack’s mom, and the golden egg wild. Concerning the Hit Ratio, we believe it to be around 18%. If you can’t play Megaways Jack because of the gambling laws in your country. Visit our USA online casinos. They offer you a plethora of RTG and Betsoft slots. If you’re looking for slots with a traditional reel set up, have a look at Wonder of Ages.

Keep an eye on the magic harp situated to the left side of the reels. When you trigger the harp on a random spin in the base game it awards one of the following:

The magic beans also play a prominent role. When 3 of them appear in Tumble they add 1 to 3 positions to the beanstalk. With every cascade, the beanstalk highlights a leaf. When you gained eight or more positions on the beanstalk you’ll trigger the free spins:

In typical Megaways fashion, the Free Spins feature in Megaways Jack increase by 1+ during each cascade. If you manage 4 tumbles in a row you’ll gain an extra 2 free spins. If you get additional tumbles of more than 4, you’ll receive 1 to 4 more free spins. The Harp feature makes its presence felt in the Free Spins. It can award you a maximum of 4 wilds, 4 free spins, or a 3x multiplier on each free spin.

If you have the bankroll you can use the Buy Option to trigger the Free Spins immediately. Besides, it will cost you 30x to 130x your stake, depends on how much you’re prepared to spend. Once the paid feature is triggered you’ll receive 6 to 10 free spins.

Megaways Jack is similar to Majestic Megaways, but the only difference between them is that the former’s visuals are slightly more polished. The modern fairy tale slot machine is not a watered-down version anymore. Especially if it offers a maximum cash prize of 25,000x your stake. Not to mention the Cascading Mechanic, the Buy Option and the harp feature. No wonder, they’re more interactive with a score of elements which is a sheer spectacle from start to finish. Aside from its technical achievement, don’t let Megaways Jack deceive you. It’s a high variance slot that’s just as mean as the giant that’s baying for Jack’s blood. Question is, will it be your golden egg? Or, will it come crashing down to earth like Jack’s beanstalk?