If you want to find a pot of gold at the end of the rainbow head on over to the magical emerald isles. MegaJackpots Isle O’ Plenty is an IGT powered progressive video slots.

The game’s house edge ranges from 7% to 9% and the maximum payout is 5,000 times your bet (5 Red-haired leprechauns). Ah the luck of the Irish. Incidentally this is also IGT’s third installment of its MegaJackpots series. The other two are Cleopatra and Siberian Storm. The current progressive jackpot payout is £800,000 and counting. It can go up to a million pounds.

The game is fully compatible with most mobile devices and desktop. It features 40 paylines and 5 reels. The smallest amount that can be wagered per spin is $£0.60. The star feature of this progressive jackpot is that it pays out in 3 ways. The jackpot is won when you hit 4 MegaJackpots icons on the centre reel during the base game or free spins. 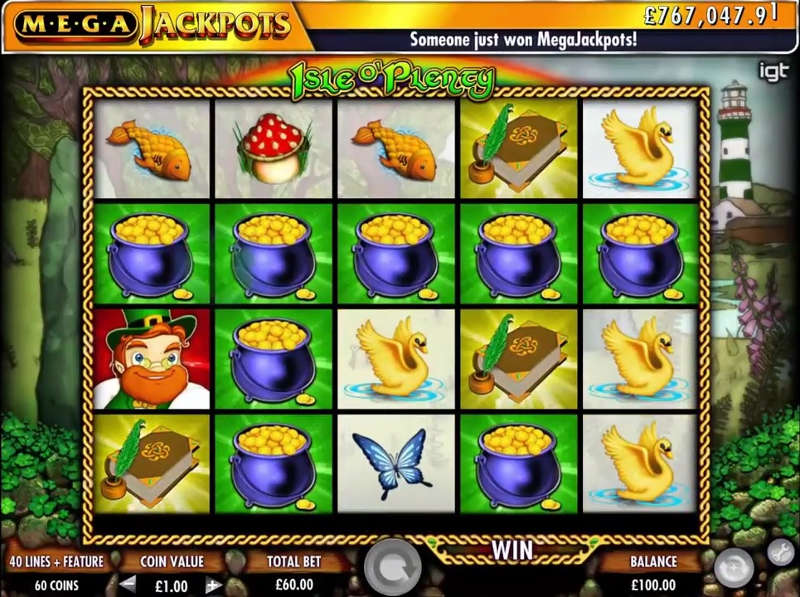 Because MegaJackpots Isle O’ Plenty is a progressive slots high rollers can wager up to a whopping £$800 per spin. Just a quick heads up. This is a high variance game so don’t expect loads of payouts. On the contrary you’ll receive loads of dry spins but if wins do occur it pays out big!

It’s nice to see that the game does give the player a sporting chance by offering three bonus games. The first bonus game is the Wild Rush feature. More wilds appear here during the base game and they come with free spins. When the wild icon appears additional wilds can pop up by spreading down the entire reel.

Some players have labelled MegaJackpots Isle O’ Plenty as extreme. To be honest I think it’s a bit harsh. On the contrary it’s a well-balanced game with the occasional big win in between a couple of dry spins. Don’t count on winning huge payouts during the base game. The big payouts normally occur during the free spins.