Microgaming’s Megah Moolah has often been dubbed the ‘Millionaire Maker‘ and for good reason. This is the best possible description one can give to one of the virtual gaming world’s top progressive jackpot slots. Since 2008 this 25 payline, 5 reel game has made a couple of instant multi-millionaires. One of the game’s lucky winners is Jorge S who won €2.38 million. For more information on the game’s winners you can visit the website of Microgaming.

I’ve been wanting to review the game for quite some time now and to be honest it’s really difficult to ignore simply because of its life altering payouts. The graphics and game animations are not as sharp as one would expect from a Microgaming slots but it doesn’t matter especially if the game has 4 progressive jackpots! The slots has an African Safari theme to it. The animals depicted on the reels are Africa’s big 5 animals: Buffalo, Giraffe, Zebra, Lion, elephant, antelope (one that winks), wilds and scatters.

To cut right into it the game has enough features to entertain you for hours on end, starting with the free spins and wilds. And, then there’s the top non-progressive jackpot of 225,000 coins that can be won during the main game. The house edge of the game is 6% which means the return to player (RTP) is 96%. During the free spins feature up to 15 free spins can be won with a 3x multiplier. 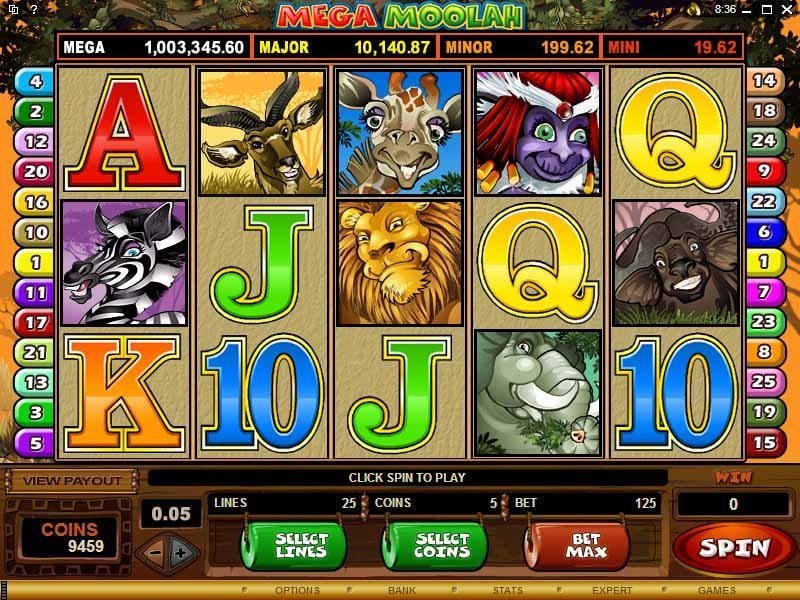 It’s evident that the developer created a game for players from all walks of life and not just for high rollers. The higher you average stake per spin the higher the jackpot. The jackpot is won randomly, in other words it can pay out on every single spin. At the end of the day it’s all about the jackpots and there are 4 of them: Mini, Minor, Major and Mega. Low-staked players can spin the reels from $0.25 and high rollers can wager up to $6.25 per spin.

The lion is the wild symbol when it completes a winning combination it substitutes all the other symbols on the reels except the scatter (purple monkey).

When 3 or more monkey scatters appear regardless of place on the reels, the free spins feature is triggered awarding you 15 free spins with a 3x multiplier which triples all wins.

How can I win the jackpot? This is a progressive game and proportionate to your bets. The higher your average stake per spin the better your chances are winning the Mini, Minor, Major or Mega jackpots.

The Jackpot Wheel can pop up at any moment on the reels (randomly). But it focuses more on high rollers, the higher your average stake per spin the better chance you have at unlocking the Jackpot Feature.

The best thing about the slots is its previous big winners and reading stories like this is simply great. Georgios M from Greece won an incredible €6.3million on a bet of €5. At the time it was the largest online jackpot. In 2008, Radoslaw a Polish player had to travel from Poland all the way to the UK to collect his cheque of €1.2 million.

Mega Moolah’s history may be the best thing about this slot. We’re inspired by the stories of past winners and ever hopeful that we could be the next one. Everyone talks of Georgios M from Greece, who bet $5 and won €6.3million, the largest jackpot ever in online slots history. His first words after winning were, predictably, “I cannot believe it.” Then, there’s young Radoslaw M who travelled from Poland to London to collect his €1.2million in 2008, making sure to “go to Harrods for a shopping spree!” Even nice old ladies like Mrs. P have won it. .

It’s not often I say this so please hear me out. Mega Moolah by Microgaming is a five star progressive slots because of its 4 jackpots and there’s also something in it for the low rollers since the biggest non-progressive jackpot win is 225,000 coins. It’s laced with wilds, scatters and a free spins bonus round where all wins are tripled. It’s a low variance slots that pays out often but wins are small which gives you enough cash to spin the reals and hopefully win something big. If you fancy another progressive slots but with a darker theme give ‘The Dark Knight’ a crack (https://casinowhizz.com/slots/dark-knight-slot-review-bonus/).