Mega Moolah Absolootly Mad is a joint effort between Microgaming and Triple Edge Studios. If you wonder what’s up with the name and if Microgaming is reinventing the wheel all over again you’re not far from the mark. Even though it’s a progressive jackpot slots, you can win 2,343x your stake in the base game. The progressive slots jackpot has 5 reels, 3 rows and 243 ways to win.

However, we couldn’t care less because the real money slots is explosive! Whatever cliche you throw at it is justified. Is it Deja Vous all over again? Yes, it most probably is but we couldn’t care less. Microgaming piggybacks onto Mega Moolah which is probably its most successful release of all time. If we strip away the layers of Mega Moolah Absolootly Mad. It has a Multiplier Trail, Free Spins and a Rolling Reels Feature. There’s a Jackpot Wheel that you can trigger for extra cash prizes. Furthermore, you can trigger one of four progressive jackpots linked to the Mega Moolah network. Before we press on Mega Moolah paid out more than 1 billion Euros in cash prizes. 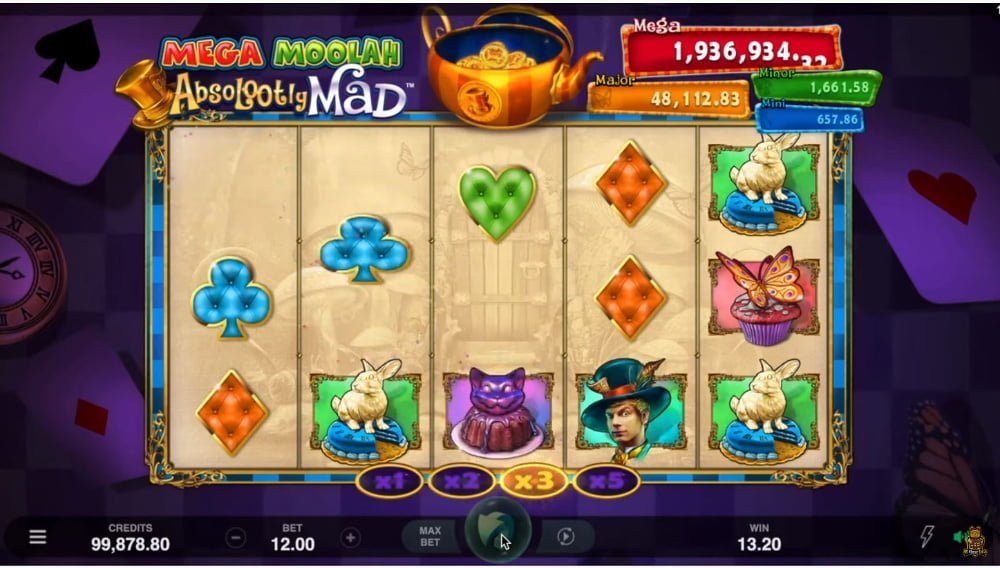 The symbols that appear on the reels are low-value cards from 10 to Ace. Followed by a pocket watch, butterfly, rabbit, scatters, the mad hatter, Cheshire cat, and teacups. Okay, the entire motif reminds us of Alice in Wonderland. The premium symbol is the Mad Hatter when 5 of them pitch, you’ll pocket a prize of 10x your stake. Now, let’s look at what the RTP has to offer and if it’s decidedly brutal or does it give you some leeway. Strictly speaking, the RTP’s of progressive jackpots are low because they offer life-changing cash prizes. The RTP of Mega Moolah Absoolutely Mad is 92.02%. Well, it’s not bad especially if the Hit Ratio is 32.53%. 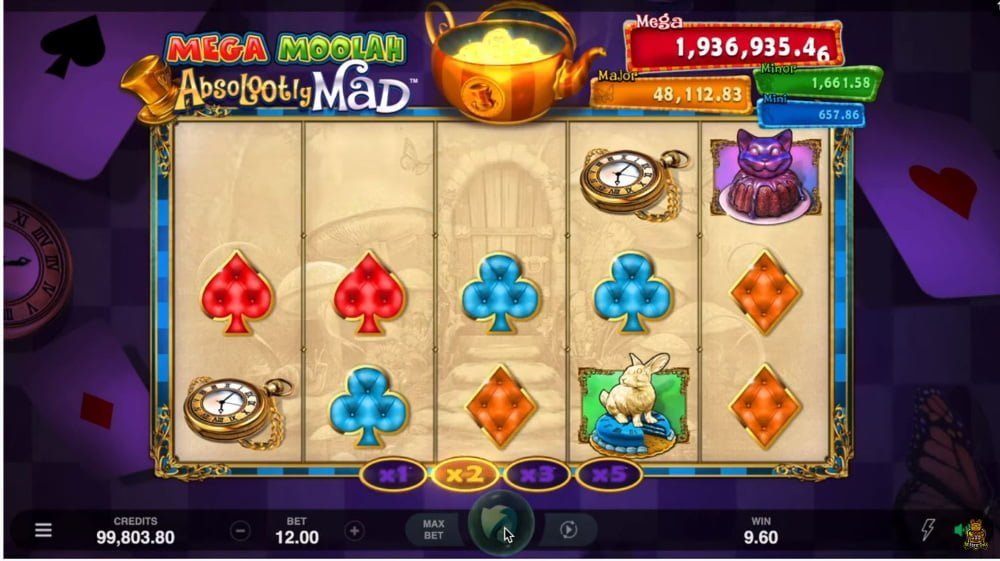 It’s difficult not to get overly excited with the features Mega Moolah Absolootely Mad offers. One thing that crops up is the reel mechanic because it appears that Microgaming borrowed a feature or two from NetEnt’s Gonzo’s Quest.

The Rolling Reels feature is basically a glorified cascading system. When you hit a combination of winning symbols they explode from the reels and new once drop in from above. As long as you keep on hitting the winning combos, the Rolling Reels feature sticks around. Somewhere in between, there’s a Multiplier Trail with multipliers of 2x, 3x, up to 5x. If memory serves us correctly, Gonzo’s Quest also has a top multiplier of 5x in the main game.

Yeap, there’s a Free Spins feature too which gives you more reason to play the slots for real cash online. To get into Mega Moola’s Absolootely Mad’s free spins feature, you need at least 3 scatters. Once the free spins feature is active, the Multiplier Trail kicks in. You start with a minimum multiplier of 3x, and on every roll, it shoots up to 6x, 9x and eventually up to 15x. We can’t help but notice it’s Gonzo’s Quest all over again because the multiplier in the free spins is also 15x.

Okay, this is where things get serious. To trigger the Jackpot Feature the Golden Hat wild must pitch on reels 2, 3 and 4. It replaces symbols adjacent to it in winning combos and it awards extra free spins. Every time the wild pops up it goes into the meter situated just above the reels. You’ll trigger the Jackpot Wheel after the Rolling Wild reels feature. A new screen opens with the Jackpot Wheel. It has 20 segments with the Mega Jackpot as one of the segments. Herewith the sizes of the four progressive jackpots:

Let’s conclude matters with, in for a penny or in for a pound? Well, we don’t have to tell you that when it comes to progressive jackpot slots it’s always ‘all in’. Unless, of course, you want to play it safe. If you do then Mega Moolah Absolootely Mad is not for you. Do we recommend it? Yes, absolutely because we’re big fands of Mega Moolah. Triple Edge Studios factored in a few safety features such as a Cascading Mechanic, Free Spins with multipliers of up to 15x. And, not to mention the Multiplier Trails and the Rolling Reels features. You can also win more than 2,000x your stake in the base game. Not to mention the jackpot of £$1 million. If you want to play a progressive slot with an even bigger jackpot, hit Mega Moolah!