Medusa MegaWays from NextGen Gaming is a high variance video slot with 6 reels, 117,649 Ways to Win with cascading symbols, an extra reel, re-triggerable Free Spins with big multipliers and extra wilds. It comes with a Buy Pass feature that enables you to buy-into the Free Spins immediately but at a cost. The top payout (non-progressive) on a single spin is 50,000x your stake.

From the first spin, high volatility action greets you and it is one of those slot machines where you must look carefully before you leap. The cascading mechanic removes winning symbol combinations from the reels with new ones dropping in from above which means successive wins can occur. NextGen Gaming did a good job in the visual department which showcases Medusa’s antics across the reel set.

Bets per spin start at £0.25 to £25 playable at all our best UK mobile casinos (https://casinowhizz.com/uk-online-casinos/) where a range of perks starting with a welcome bonus to rebate on losses await you. Medusa MegaWays has a theoretical return to player percentage (RTP) of 96.28% and once a bonus round is triggered it shoots up to above 97%.

The theme of the slots pays homage to one of Greek mythology’s most infamous yet tragic monster-gorgons, Medusa. She’s described as a winged human female gorgon with live venomous snakes for hair. Legend has it that Poseidon sexually assaulted her in Athena’s temple which enraged her (Athena) to a point where she transformed Medusa’s hair into serpents.

Against the backdrop of the reels is Medusa’s lair and symbols on them are sandals, Medusa Wild, Trojan shields, golden snakes, Pegasus (winged horse), rings, snake pendants and a Greek soldier. The Medusa logo is the scatter and cards from 10 to Ace are low value. The most valuable symbol brings in a payment of 30x your stake for 5 across the reels. 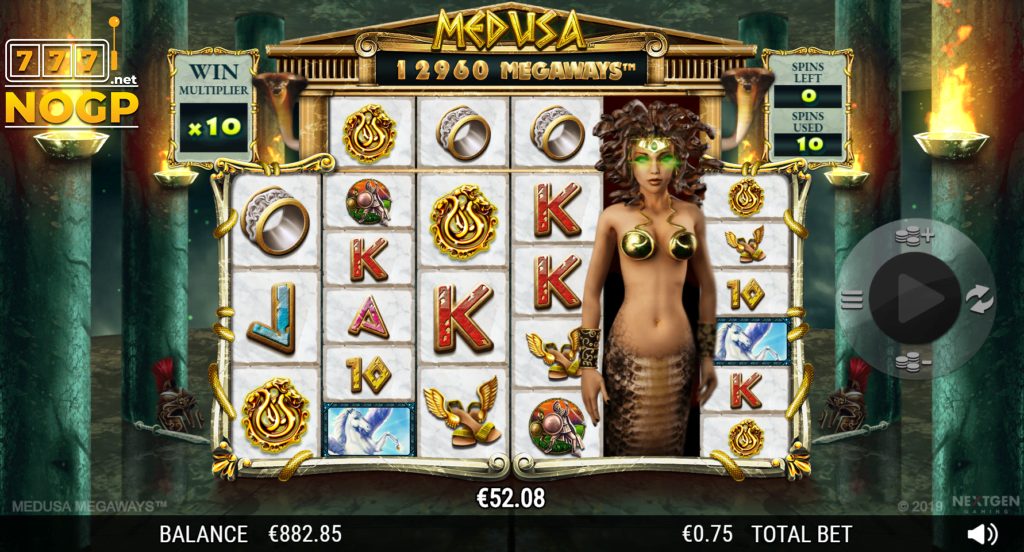 Medusa is the wild and winning combinations are completed by it when it substitutes adjacent symbols except the scatter and the soldier symbol. The Soldier only pitches in the Free Spins where an extra reel is added.

When 1 or more wilds pop up on the extra reel, it triggers the Medusa’s Gaze feature; she expands by covering a reel and awarding 1 or extra wilds. Once done, she disappears from the reels and play returns to the main game. The base game wins are not the best we’ve seen as it cuts sharply into your bankroll. It’s one of those slots where you are on a wing and a prayer hoping to trigger the free spins quickly.

Alternatively, the free falls bonus is initiated by 3 or more scatters which gives you 10 free spins with the possibility of gaining more (extra scatter awards 5 free falls). The Unlimited Win Multiplier feature is applied starting with a 2x multiplier with increased multiplier wins on each free spin win.

The Temptation feature gives you a choice between two options. You can grab your free spin wins and run, or you can re-play the feature again hoping for a bigger payout. Our advise to you is to grab and run like the wind under Pegasus’ wings.

Medusa MegaWays is full of moving parts which provide players with a modern twist on a classic tale. It promises to keep you surprised on every spin, keeping matters fresh and entertaining.

The volatility is steep but a top win capped at 50,000x your stake on each free spin is not to be ignored. The game offers the dedicated slots fan a lot despite coming across as complicated. Its bonus rounds combine nicely to make for a satisfying experience that will make any non-slots player jealous.

Of the bonus rounds which one pays the biggest wins?

We like the free spins feature because it pays as much as 50,000x your stake on each free spin; the Snake Strike, Unlimited Multiplier and Medusa’s Gaze features are applied to it. If you won a small amount of cash upon conclusion of the Free Spins feature, you can always re-play it for a better win, which is great.