Luck of Ra slot sees Microgaming take on a new partner, Plank Gaming. The online slot studio doesn’t boast a large portfolio of slots yet. Like so many previous slot releases we visit the land of ancient Egypt. With its massive stone monuments dedicated to the gods and pharoahs it’s a pulsating theme. As it embues real money slots players with a sense of escapism and adventure that echoes across millennia.

The reel structure of Luck of Ra sports 5 reels, 3 rows and 10 paylines. A classic model that strings together flashy bonus round. To begin with there’s a Super and Mega Mode.

The second bonus is the Synce Reels with Mega Symbols. Finally, the jewel in the crown of Luck of Ra, is its Free Spins feature with its Expanding Symbols. Last but certainly not least is the Bonus Buy Feature. Players can trigger the Free Spins feature at a cost if they want to. In spite of the game’s simple engine it has plenty of in game bonus rounds to keep you busy.

We accept the game’s high volatility. But, what doesn’t make sense to us is the low max earning potential of 750x the stake. The hit frequency isn’t great either as it’s only 16.91%. You’ll have to slog it out for a winner on every 6th spin. Not very encouraging if you ask us.

The coin denomination starts with €0.10 to €10. The nice bit is it’s suitable to the casino budgets of casual players. The problem however is it’s a high variance slot that will sting your bankroll. If you’re brave enough to venture into the couldron of Egypt. The online slots now graces the lobby at our instant withdraw casinos online for gamblers from Europe. 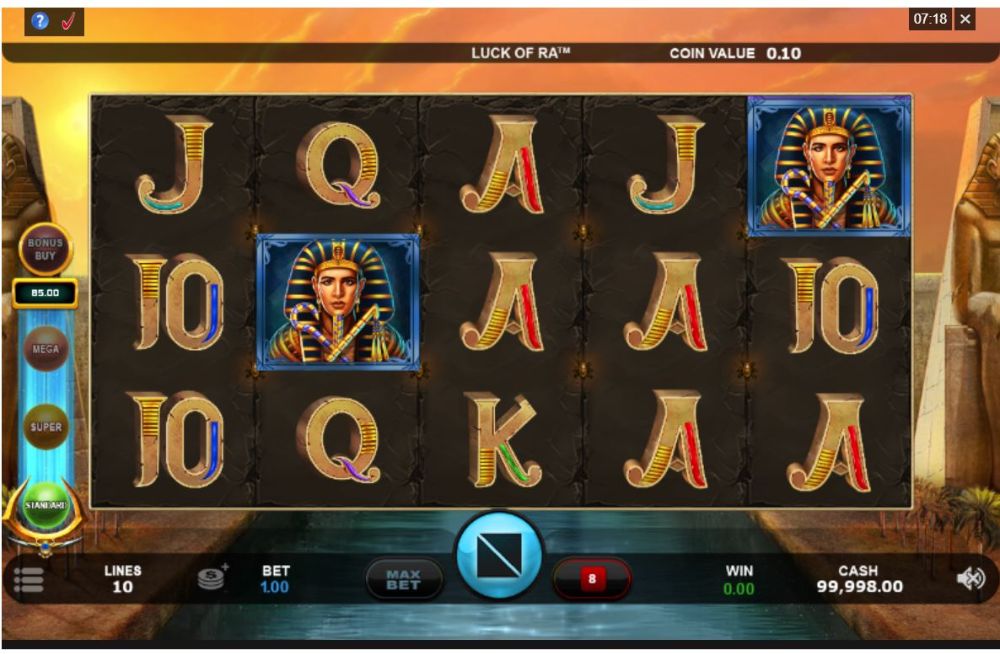 The RTP of Luck of Ra is 96.06%.  It doesn’t offer you any reprieve from the tight math model either.

Let’s start with the low-value symbols first. They are the card ranks from 10 to Ace.  The high plays have the god Anubis, Pharaohs and Queens. Horus Wilds then substitute for other symbols to make wins. Not a great assortment, but we’ll have to do. Suffice to say that Luck of Ra doesn’t improve on the basic formula visually.

When two or three symbols of a kind show up you’ll receive a payout. Obviously, it depends on which type of pay symbol it is. The premium symbol is the Queen. When 5 of them show up she pays 30x your stake. Moreover, when a bunch of horus wilds populate the reels they pay well too.

Luck of Ra isn’t on offer at USA online casinos. You can play one of Betsoft’s top slots for 2021 like Take Olympus. Instead of ancient Egypt, it showcases ancient Greece in all its glory. Players can endulge themselves with 10 spins cycles and many bonus rounds based on Greek gods. To say the least, it’s a slot machine full of surprises! You can even play it with bitcoins at our best Bitcoin casinos! 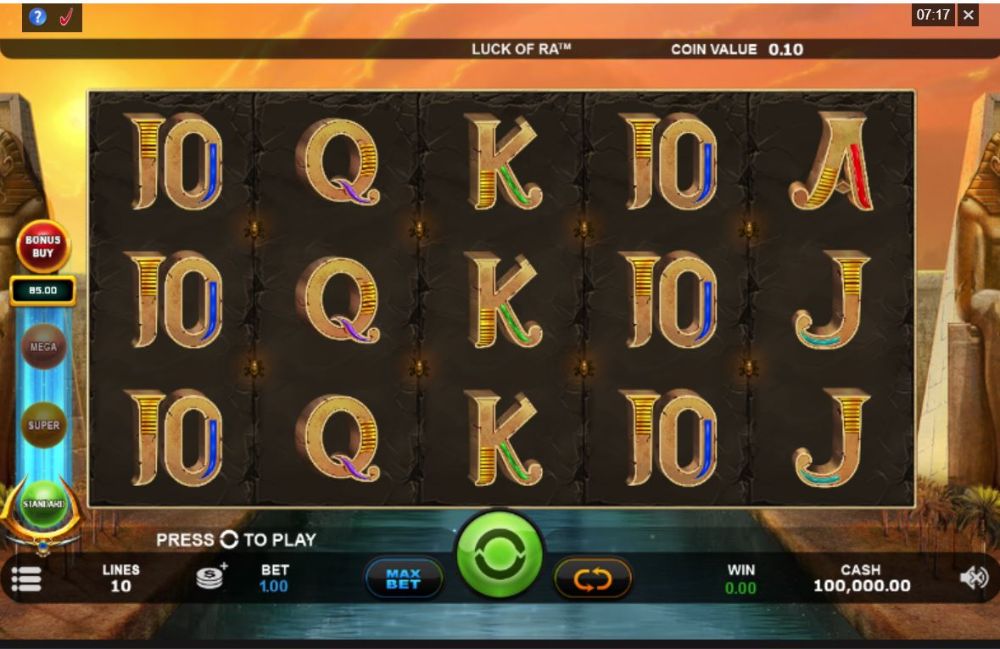 Instead of going for just a regular spin, you can choose Super Mode or Mega Mode. You won’t get a spin this way with 5 reels. You’ll have to hit the right position on a spinning compass. In the Super Mode, a win will offers you a spin with synchronized reels. Now, if you snag a win in the Mega Mode, you’ll get a ticket straight to the Free Spins Feature.

Two random modifiers can show up at any point in the base game. The Synced Reels gives you 3 synchronized reels with the same symbols. Natuarally, when it occurs the payout will be big. More importantly, the Mega Symbols that cover 9 positions (3×3) can show up on any random spin.

Players can initiate the free spins feature in two different ways. The first way to do it is through the Mega Mode or they can hit the special Scroll Symbol. Once you trigger the feature you’ll win 8 free spins. Not only that, the slots chooese two Expanding Symbols for you. They expand to cover entire reels for the bigger wins. They also pay all ways and you can get 8 extra free spins for another Scroll Symbol.

Since Luck of Ra carries a rathe rsteep variance tag. You can take a little detour by avoiding the base game. That detour comes via the game’s Bonus Buy Option. This little luxury does not come cheap as it costs 85x your bet.

Knowing what we were up against we really didn’tlook forward blowing our money on this slot. Even if it’s just a bankroll of €100; money is money. Note, we played around a bit with the Super Mode and Mega Mode, but they did not impress us. They fizzle out so often that it feels like you’re paying for nothing. Hit a few in a row and the payout can be good. Moreover, the games shoddy hit rate compounds matters further for you.

That said, all is not that bad as we had a bit of luck in the free spins. Instead of slogging out the free spins in the base game we triggered it via the Bonus Buy. With our 8 free spins and two expanding symbols we hoped for the best. We also paid €85 and we got Jacks and Queens for expansions. In total, the payout was €63, so below the cost. Well, it’s not that we didn’t know what we were up against.

For what it’s worth, Luck of Ra really doesn’t do the ancient Egyptian them justice. It gets a few things right though. For one we like the Free Spins with its Expanding symbols and the Buy Option. We aren’t particularly fond of the Super Mode and Mega Mode. And, neither do we like the game’s small jackpot and its low hit rate. To be honest it’s just a tough slot to plow through.

Believe us we’re fans of the theme. Plus, when is the last time Microgaming released a slot on their own. It appears they’re just forging partnerships with any slot studio that wants a free ride on the Microgaming brand name.

There was a time when Microgaming was the top dog, not anymore. Slots studios like Nolimit City and Big Time Gaming surpassed it a long time ago. Time to pucker up Microgaming.