Fans of zombie-themed slots will be delighted to hear about Microgaming’s latest installment: Lost Vegas. Suppose you guessed the theme of the slots already…yes it’s all about zombies and their antics on the reels. Since October is the month of Halloween it’s the perfect game to celebrate Halloween. Symbols that appear on the reels are different types of zombies, survivors (non zombies), a zombie nurse, free spins, wilds, card symbols from 10 to Ace and scatters. Lost Vegas features 243 paylines and 5 reels.

The audio of the game is simply explosive yet scary at the same time and the visual aspect of the slots is simply top draw. It’s the perfect game to play from your mobile phone or desktop be it for real cash or just for fun. The average return to player (RTP) 96.5%. What I also like about the game before it starts you must pick a side: ”Survivors” or ”Zombies”. There’s a couple of innovative streaks that shine especially when you hit a winning combination during the base game; a zombie hand pops up with notes-nice! 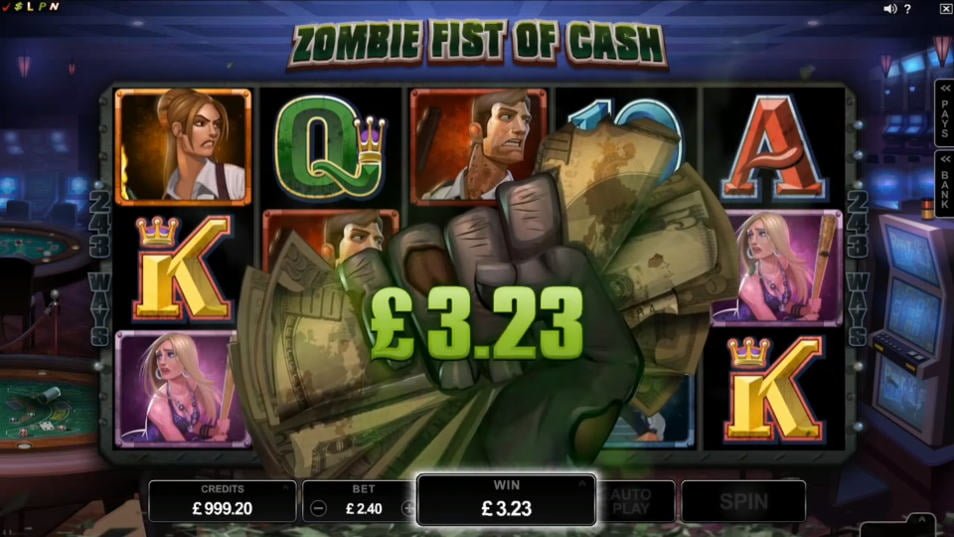 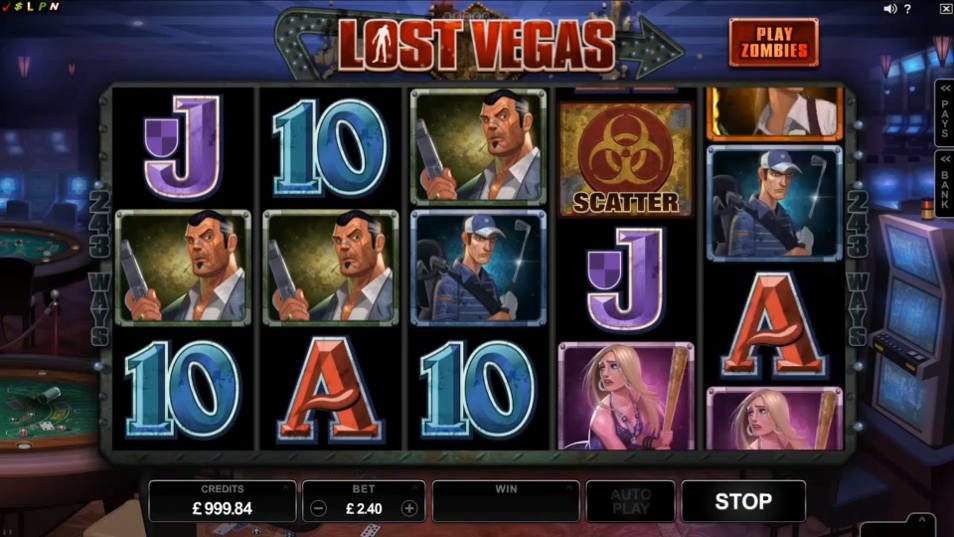 Before you start spinning the reels select the proper coin range first and make sure that it is in line with your bankroll. My average bet per spin was £2.40. I chose the ‘Zombie’ option just to see how things pan out, to say the least I wasn’t disappointed. All I can say it’s nice to be on the winning side for a change.

As mentioned previously, before the game starts you’re given 2 options: Survivor or Zombie? Each option offers you wilds, free spins and a scatter icon. In the Survivor section the wild substitutes all the other symbols to form a winning combination. The wild symbol is the ‘Lost Vegas’ logo and when it forms a winning combination in the zombie mode, Elvis and the other zombies becomes animated.

During the Zombie game the Blackout Bonus is the wild which expands to form additional winning combinations. Just like the ‘Survivor’ game the free spins mode is triggered by 3 Bio hazard symbols-it’s slightly different though. The zombies infect the reels turning them into wilds on every single spin. Of the 2 free spins features I like this one the most because I managed a neat win of 80x my stake. The free spins end when all the reels have been infected with wilds, strictly speaking you’ll end up with reels full of wilds! And if you survived a total of 50 spins you’ll receive a special cash prize.

Lost Vegas by Microgaming is a pretty impressive slots since it plays more like a video game. The graphics are top-notch further augmented by some chilling animations, explosions, blackouts and a decadent free spins mode. Talking of which, of the 2 free spins features I prefer the Zombie one simply because of the wilds. A bunch of them on the reels offer some spectacular wins. I know it’s still early days yet to make a prediction but I think this might just be one of Microgaming’s biggest releases yet. Then again I might be wrong and critics of the game might cut it off at the knees-only time will tell.