If you think that the luck of the Irish is on your side, Quickspin’s Leprechaun Hills is a game with a lot of grunt but it’s no walk over. With 40 paylines, 5 reels it offers a non-progressive jackpot of 1,000 coins. Against the backdrop of the reels is an Irish countryside flushed in green. This high variance video slot can be played from 40 pence right up to £80 per spin.

The audio supports the theme well plus it adds another dimension to the game. The visual side of the slots is okay further augmented by a ‘Lucky Re-spins and Free Spins feature that awards 7 free spins. During the free spins a rainbow/mystery symbol transforms medium value symbols into high value ones increasing payouts by as much as 50%.

Leprechaun Hills can be played on PC desktops or mobile phones in the free mode. The main characters of the game is its leprechauns, after all what’s an Irish themed slots without them. As we delve a bit deeper into the game mechanics of the slots it feature 2 bonus modes. It’s one of those games that can suck up your bankroll in no time so caution is advised.

Paying symbols on the reels are cards from 10 to Ace, wild (Leprechaun Hills Wild), leprechauns, lucky horseshoes, 4-leaf clovers, pints of Guinness and magic fungi. The Irish have an old saying: ”May the sun always shine on your back.” Meaning that may good fortune always be with you. Variance wise the RTP or average return to player percentage is 95.8%. 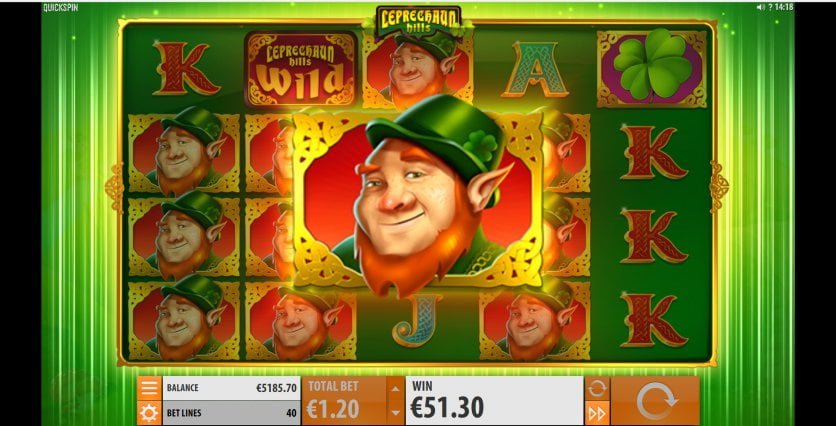 Leprechaun Hills is not for players with small bankrolls unless you’re only playing it for fun. Since it has 2 bonus rounds that pays well, it’s best to play it with a bankroll of at least £400 at an average bet of £4 per spin (100 spins). An Auto Play feature spins the reels up to 1,000 automatically for you.

The wild symbol is the ‘Leprechaun Hills Wild’ logo. It completes a winning combination when it replaces all the other symbols adjacent to it bar the scatter.

The Lucky Re-spins bonus mode is initiated when a winning combination is formed with a medium-value symbol. These symbols are the lucky horseshoes, 4-leaf clover, pint of Guinness and magic fungi. The reels are filled with medium value symbols of the same kind awarding a re-spin.

The free spins feature is also known as the ‘Rainbow Free Spins’, it’s played when 3 pot of gold coin scatter icons appear any position on the reels. Three scatters awards 7 free spins while the mystery symbol during the free spins feature is the rainbow. When it appears it transforms medium value symbols into winning combinations 50% of the time offering decent cash prizes.

Leprechaun Hills does the basics well. In the graphic department it didn’t blow us away but it certainly has the potential for some big wins. Although the biggest payouts occur during the Rainbow Free Spins feature it’s difficult to trigger.

The fact that only 7 free spins are awarded takes a bit of an edge of the free spins. If the luck of the Irish smiles on you, you can win 1,200x your stake on a single free spin. Not a bad offering from Quickspin the action is fine and dandy; the only caveat it’s crazy volatile.