If there’s one slots that made a spectacular entrance to the world of virtual gaming it’s Saucify’s Legends of Olympia. Aside from its unique theme which is based on the Olympic Games in Greece, it’s replete with expanding wilds (2) and a free spins feature where up to 20 free spins can be won. The graphics and animations are not the best I’ve seen but it’s the game mechanics of the video slot that really shines. This is a 5 Reel 50 Payline slot.

The RTP or return to player percentage hovers around 96.3% but shoots up by a considerable margin during the free spins. The symbol that offers the highest payout at the maximum bet is the bearded athlete (discuss dude)-5 of them pays you 6,000 coins. For what it’s worth a player won a cool $4,260 on this slots at Vegas Crest Casino with a single bet-his average bet per spin was $3.

Other paying icons that grace the reels are the scatter (golden wreath), blond-haired woman with spear, the charioteer, the boxer, 2x expanding wilds, vase, gold coin, silver coin, bronze coin and long distance runners. All wins pay from left to right. The audio of the slots is authentic and compliments the theme well. 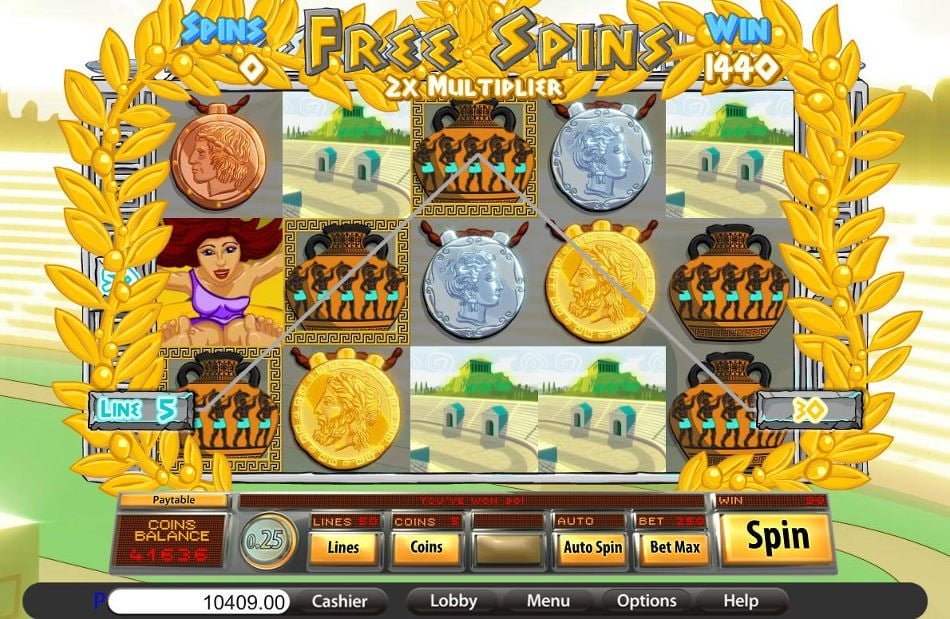 The coin range is from 0.01 up to 0.25 (1c to 25c), 50 paylines (recommended), an Auto Spin feature and Max Bet button. You can spin the reels from from 1 cents up to a robust $62.50 making it suitable to high rollers. The Auto Spin feature spins the reels automatically up to 100 spins for you.

There are two wild icons of which one is an expanding wild as well as a free spins bonus game. Up to 20 free spins are awarded with 2x multiplier wins.

The two wilds are the woman and man carrying the Olympic torches; one appears on the second reel while the other one appears on the fourth reel. When either of them completes a winning combination they become animated by using their Olympic torches. As such the reel they appear on becomes wild offering a decent cash prize. The trick here is to get both of them together on an active line, if you succeed you’ll be counting notes like a true Olympic champion.

Once again there’s nothing spectacular about the free spins mode other than a counter at the top of the reels which keeps track of your wins and remaining spins. If you hit a winning combination during the free spins all wins are doubles thanks to the 2x multipliers. It would have been nice if Saucify could have increased the multiplier wins, not that we’re complaining about the doubled wins.

Although Legends of Olympia is a good addition to the Saucify range, there are better slots in terms of visual appeal and in-play bonus features. The expanding wilds are a bonus and the free spins feature with its 2x multipliers is not too shabby. It’s a well-balanced slots with a fitting theme that pays out surprisingly well during the free spins. Is it worth a shot? You bet.