The Legend of Shangri-La Cluster Pays

The last time NetEnt released a Cluster Pays slots (Aloha Cluster Pays) was in March 2019, above all expectations the slots was surprisingly popular with players. (https://casinowhizz.com/slots/aloha-cluster-pays-slot-review/)

This time round our favourite igaming developer released another Cluster Pays 3D slots titled ‘The Legend of Shangri-La Cluster Pays‘. It contains 6 reels playable on mobile phones or PCs from 10 pence up to £200 per spin.

In his novel Lost Horizon, British author James Hilton describes Shangri-La as a fictional mystical yet harmonious valley enclosed in the western end of the Kunlun Mountains. The name Shangri-La has become synonymous with any earthly paradise. (https://en.wikipedia.org/wiki/Shangri-La)

The slots is stunning in its visual fidelity. However, it’s not only the graphics that makes the game sensational. It contains a slew of bonus modes that entails stacked guru symbols, cluster wins, a Random Substitution feature, Sticky Re-Spins and a free spins feature where 9 free spins are awarded. The top non-progressive jackpot that can be won is a mouthwatering 10,000 coins (1,000x your stake) on a single spin. The main character of the game is an ‘enlightened monk’ which you’ll see in the bottom left corner of your screen.

Paying symbols that appear on the reels are cherry blossoms, koi carp, dragonflies, flowers, cat, elephant, dragon and butterflies. The symbol that pays the top cash prize is the cat, 30 or more of them at the maximum wager pays 1,000x your stake. A substitution symbol pitches as well which replaces the other symbols except the Free Spins symbol. The Legend of Shangri-La Cluster Pays offers a theoretical return to player percentage (RTP) of 96.5%. 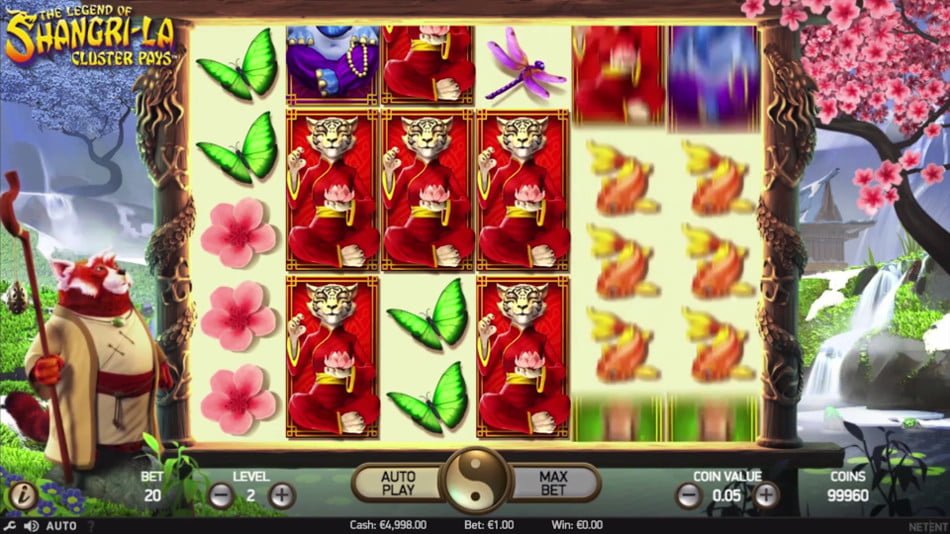 Features that makes game play more convenient is an Auto Play and Max Bet button. The former feature spins the reels automatically up to 1,000 spins. Ensure that you’ve selected the proper bet levels before you play.

The Random Substitution feature is played when a minimum of two clusters pop up during the main game. However, to be of any significance they must be 4 of the same symbol. Once triggered added to the reels is one substitution symbol which gives you a 9 symbol cluster win.

The moment 2 non-paying clusters of the same symbol pop up on the reels the Sticky Re-Spins feature is initiated. Re-spins are offered while the stick to the reels, this feature comes to an end if no more sticky symbols pitch.

Once the bonus feature is active substitution symbols are added and removed to the reels randomly, they offer you clusters of winning combinations. Now, should you win less than 10x your stake whilst the feature is active you’ll receive an extra free spin.

We know it’s early days yet but we firmly believe that NetEnt’s The Legend of Shangri-La Cluster Pays has the legs to go the distance. Whether it’s during the base game or free spins feature you can win as much as 1,000x your stake on a single spin. Winning combinations occur when the substitution symbol pitches during the free spins or main game.

The slots is of medium variance it requires a sizeable bankroll to unlock its treasures. Hopefully you’ll find your way to Shangri-La when you play the game. Without further ado our expectations for this slots is quite high, NetEnt keeps on piling up the rewards and deserves a round of applause with this one!