If you want to venture back to the stone age where the earth was still new we kindly invite you to play Lava Loot. This 50 payline, cartoonish, 5 reel Novomatic video slots offers explosive betting action. The game plays like a charm be it from your desktop or mobile device (Androids, tablets or iPhones). It offers a return to the player of 96.5% and a jackpot payout of 1,000,000 credits.

Lava Loot reminds me of the Flinstones. It features the same quirky characters across the reels such as a cave woman, caveman and dinosaurs. Even the game’s audio is the same, yaba daba doo! In addition to its vibrant characters it’s loaded with wilds, a free spins bonus game and scatter icons. A volcano can be seen against the back drop of the reels. The slots was released in March 2016. 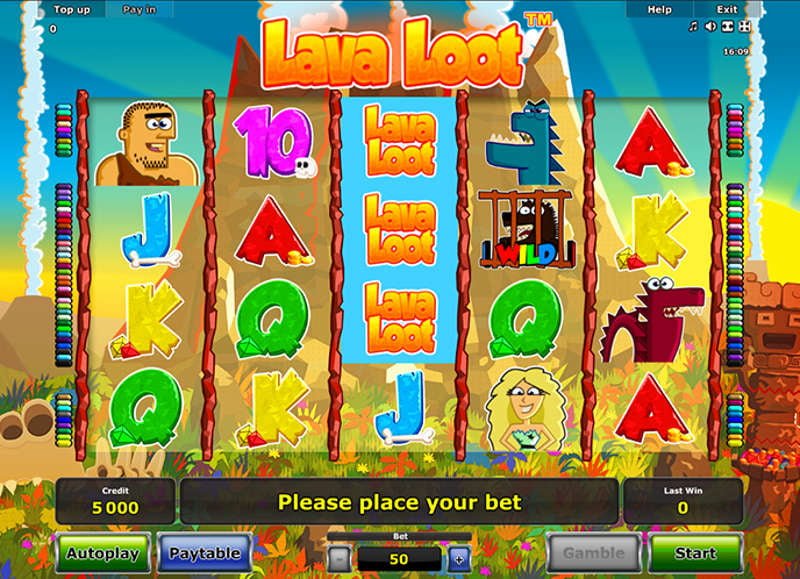 Lava Loot offers loads of betting options. Before you play, toggle the paylines and decide on the amount of cash you wish to wager per spin. Bets could be made from £0.25 up to £50 per spin. In the symbol department Lava Loot does not disappoint. You can win as much as 500 times your stake if you land 5 Lava Loot symbols. The wild is the dinosaur in the cage. When it appears on an active payline it substitutes all the other symbols except the scatter.

Bonus Scatter: The symbol the offers the highest payouts is the scatter (pink volcano). Five of them at the highest bet level offers a magnificent payout of 2,500 times your bet. The free spins bonus game is triggered when 3 or more of them show up on the reels.

Free Spins: This is known as the ‘Lava Loot’ bonus game and for your efforts you’ll receive 10 free spins. When the wild lava icons appear on the second, third and fourth reels additional re-spins are awarded. The good news is that more free spins can be won. Believe me I’m not joking or am I? Nah, just kidding. If the Bonus scatter lands on reel 1 and 5 you’ll receive another 10 free spins making it 20 in total!

Big Wild Bonus: This feature can be triggered randomly during the base game. If 3 icons appear any place on the reels they become animated and you can see all three little volcanoes erupt. When the Big Lava wild slides down the three centre reels (3×3 block) and stops on the 1, 2 or 3 rows-a re-spin occurs. Suffice it to say you’ll receive a huge payout here.

With slots releases like Lava Loot, Novomatic is fast becoming the software provider of choice for most UK online casinos. The big pay outs occur during the free spins bonus game and when three wilds appear during the base game. This is a highly entertaining slots that offers loads of eruptions.